As a teenager, I spent my summers (most notably ’89, ’90, ’91) working my tail off, baling hay, fixing tractors, unloading feed trucks and using a pitchfork to empty cow stalls into an awaiting manure spreader. My best friend was Dave, and his grandparents were farmers… I was a farmhand, and I loved it.

I thought every aspect of it was cool. He and I (and his older brother who tended to torment us, sorry Brian) got to hang out a lot – it was a very ‘Stand By Me’ childhood. We were adventurers, trailblazers, explorers and always up for a challenge, especially when it paid $4.75 an hour.

We were saving, I was saving. I worked on the farm for years before this, but it was always money for baseball cards or a few carnations with corny notes for the girls I liked, on sale in the middle school lobby for Valentine’s Day.

This time, I was saving up for the big piece.

The missing piece of the teenage puzzle that I’d been searching for. THE RIDE.

My friend, Jason, got his license a year before me – he lived just down the pike. He’d been doing the same thing I was, saving up to buy his first car. I’m pretty sure it was an ’89 Mustang 5.0. I would spend my entire day riding shotgun, delivering Mario’s Pizza with him because we could hang out and DRIVE.

He used to just turn the car on and we’d walk around it, while he sat inside and gave it a tap, throwing it up to 6 or 7 thousand RPMs. Dual exhaust and we could hear the growl and feel the power. It was every kid’s dream to have a Mustang GT 5.0, at least where we grew up.

We scoured the local auto mags (there was no Cars.com at this point or Car Kids!) for the best deals. I know, I know… 2-wheel drive with years of concrete dust embedded into the seats from every construction site between Allentown and Jersey, but I was going to make this mine.

He had told me one night at dinner that if I saved up $1,000, he would turn the keys over and sell it to me.

BOOM. I had an opportunity.

He wanted to see me work hard and build character, save money and EARN this first car (TRUCK). And I was determined.

Everything was lining up. I was secretly reaching my goal of saving up more money than I’d ever seen to buy a vehicle. My mom even helped me open up my own account at the bank, so that I could deposit the money and not be tempted to spend it. She took me to apply for my learner’s permit and I’d passed. This meant that I could drive something… WITH an adult and BEFORE midnight, but whatever.

So I practiced, I practiced, mostly in my mom’s ’88 Chrysler Reliant station wagon – that was the car I took my test in.

But as I got closer, I remember my dad taking me over towards the lake on a back road, pulling over and telling me to give it a go.

I had driven tractors on the farm that were manual with a clutch, but this was much smoother and took a little getting used to. I remember stalling several times and my dad showing me with his hands forward and back, telling me not to get frustrated – clutch out, gas in – get the feel for it. Then I went on to grinding the gears, but eventually, after a tiny bit of encouraging, yelling and laughter, I figured it out and we shared a moment.

A few weeks later, I went to the bank as a sixteen-year old kid and signed a withdrawal slip in the amount of $1,000. I’m pretty sure it was a Friday night – pizza night for us. As we sat there eating dinner, I plopped a stack of cash onto the table before dessert.

It was my big moment.

That following week, I got the keys. I scrubbed that thing within a millimeter of hard, unpainted steel. I pounded those seats with broomsticks until the entire neighborhood was having trouble breathing. I washed it, waxed it and eventually put street rims on it with a tonneau cover. I drove it to and from school and took my girlfriend to junior prom in it.

Over twenty years later, I guess I look at cars differently.

I have a family now. A little bit is about horsepower and 4-wheel drive and the tow package, but it’s also about how I’m going to make an 800-mile road trip and be able to accommodate 2 adults, 3 kids, a dog and a ton of suitcases–comfortably.

It’s about airbags and customer safety ratings and how many highway and city miles this thing will get.

It’s no secret that me and my kids have a relationship with cars. 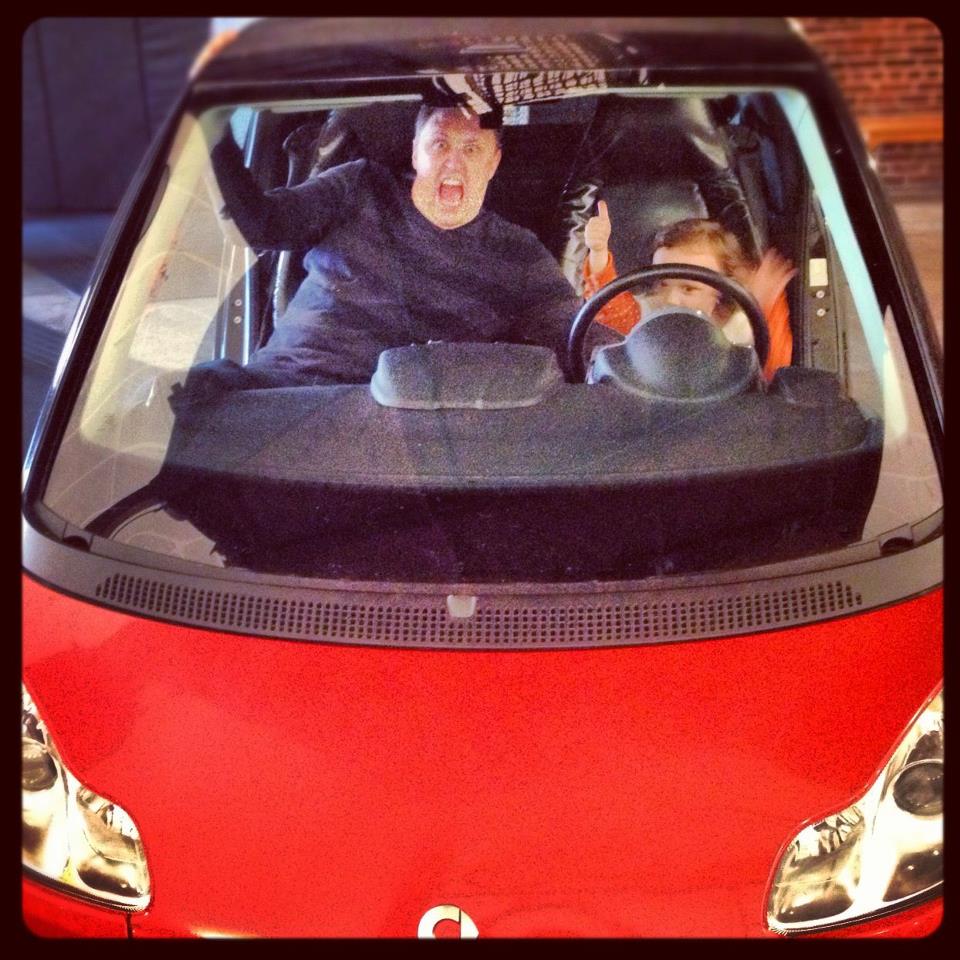 And that I may have, on occasion allowed them to see what it feels like to be behind the wheel. 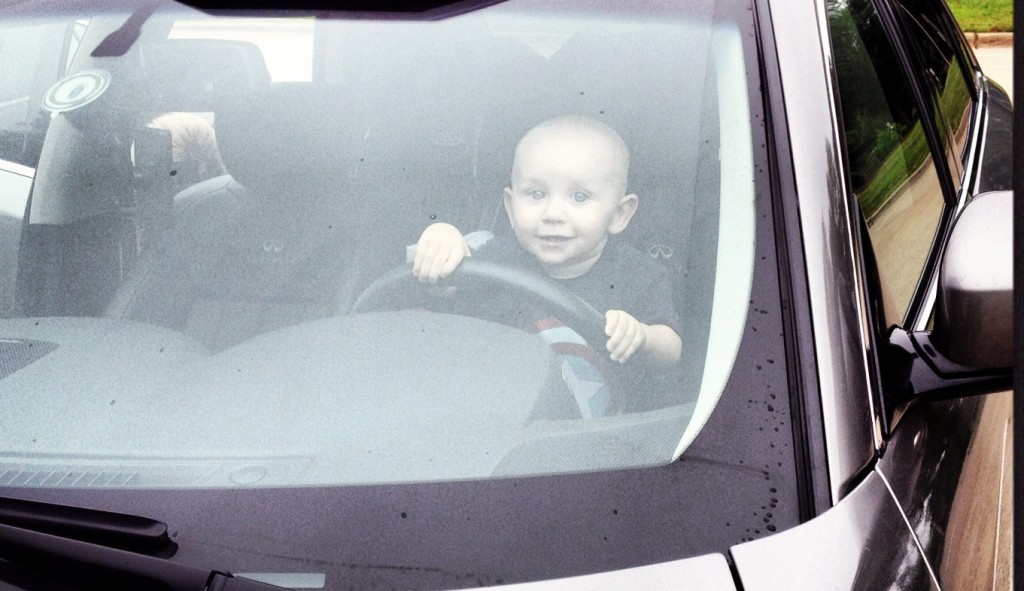 We’re a good nine or ten years away from Ava getting behind the wheel for real, but it hasn’t stopped us from already talking about the approach we might take to help them get their first car. Or maybe that won’t even happen – maybe the kids will share a car or borrow ours when they need it, there’s probably a few schools of thought here.

My personal belief is that I’m all about them earning it the old-fashioned way, you don’t get the car until you have the cash. My wife, however, has a slightly different opinion, and that is that we need to provide them with an incredibly reliable vehicle, that we don’t live in the same world as we did in the 80’s or 90’s. The idea of a broken down beater on the side of the road with only our teenage daughter in it is a frightening thought. She knows how to paint a graphic picture to get me to rethink my position.

What have you and your family done for your child’s first vehicle?

For now, anyway, we can’t get too far ahead of ourselves. It’s about making solid, good decisions for the sake of my family – for their comfort and safety AND mine.

With 31 million visits each month, Cars.com is the leading online destination for car (or truck) shoppers and owners. It offers credible and easy-to-understand information to help consumers research, price and find new and used vehicles and quality service and repair providers.

Purchasing a car (or truck) can be overwhelming, like it was for me when I was 16, but Cars.com encourages you to rediscover what made you fall in love with your car in the first place – it brings back the joy of car shopping.

This is a sponsored conversation written by me on behalf of Cars.com. The opinions and text are all mine.