It’s Black Friday and after watching the news before bed last night, seeing people push, shove and punch one another in the groins for a flat-screen TV, I’ll be staying home today, basking in the warmth of the fireplace, eating hot turkey sandwiches.  No concussions, sprained ankles or ‘mall brawls’ for me, thanks.  Cyber Monday is a little more my speed.

Yesterday was a success.  It was the first time in years that my wife and I have hosted Thanksgiving at our house, so the pressure was on to represent.  I’m not sure what the bigger challenge was, trying to clean the house with two toddlers following behind us (one naked because he’s potty-training) undoing everything we had done or preparing a massive amount of food and timing it’s completion.

Nothing says ‘Happy Holidays’ like watching your son drop a deuce on the kitchen floor, as you stand handcuffed to the sink, forearm deep in a Butterball.  But alas, the centerpiece of the feast was a success and I wholeheartedly stand by the preparation.  Over the years, I’ve tried cooking it a hundred ways — upside down, in a paper bag, in a smoker and even deep-fried.  But for the last two years I’ve gone ‘old school’ and roasted it, breast-up.  The KEY has been brining the bird for 24 hours leading up to cook time.  Last year I brined it in with whole cranberries, etc., but this year I tried out a different mixture from The Pioneer Woman and I’m telling you – my dad nearly fell out of his chair, yelling things like ‘It’s so damn moist!’ and ‘This isn’t the shoe leather I’m used to!’

So as the bird rested, we started slicing the baked ham and pulling casseroles and sides from the double oven, lining them up around the island in the kitchen.

There’s a lot that goes into cooking some of our favorites:  corn pudding (Pennsylvania Dutch recipe), oyster filling (PA Dutch!), potato filling (Nana’s recipe), squash casserole (a Southern fave topped with Ritz Crackers), sweet potato souffle and green bean casserole (everyone’s fave).  Hours and hours of work… for twenty minutes of stuffing our faces, then falling onto the sofa and unbuttoning our pants to watch football and the Macy’s Thanksgiving Day parade on DVR.

Yesterday I was thankful for family and good friends, for health and happiness and continued good fortune.

Today… I’m thankful that I didn’t explode or rip the seat of my pants wide open making runs to the trash bin.

Today, we turn the corner.  It’s “OPERATION:  BOX UP ALL THE HALLOWEEN AND AUTUMN CRAP AND GET IT DOWN TO THE BASEMENT SO WE CAN GET READY FOR CHRISTMAS”.

November and December are traditionally stressful with the holidays and our ever-expanding family, but they don’t have to be.  We’ve personally decided to ‘dial it down’ this season (not just because my wife’s 8-months pregnant and I’m not mentally prepared to have her go into early labor at midnight in the middle of Nordstrom’s on Black Friday) because we’re happier that way.

In an attempt to find ways to relax and make things easier this holiday season, it made perfect sense to team up with Ritz Crackers.  Ritz has long been known to bring FUN to the party and this year, they’re proud to debut an innovative take on a traditional holiday tradition in it’s Great Ritz Holiday Parade.  Unlike the traditional parade, which is mainly a spectator event, Ritz is inviting its loyal fan base to visit their site and take part in this virtual parade, build customized floats and actively participate in holiday festivities.

Here’s my float… because I like robots, penguins (I hope I DON’T get one) and a plethora of gifts. By following along on Facebook and Twitter, you’ll notice that each stop on the parade route (every day from now until Christmas) offers unique deals and valuable content about seasonal tasks around the house (which I’m unfortunately doing today), preparing meals, wrapping gifts and making travel arrangements.

So take a minute, click around, build your own float and check out what this holiday campaign has to offer!  I’ll check in soon with more information and special offers along the way! 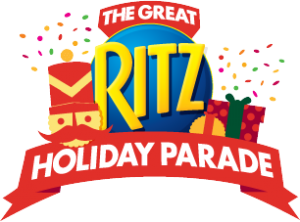 EDITOR’S NOTE:  This is part of a series of sponsored posts by Ritz Crackers, however, all opinions and thoughts are those of Dad or Alive.