Sleep is a valuable commodity around these parts right now.  Up until last night, I’ve been waking up on a pile of blankets on the floor of my son’s room.  Unless you have amnesia or were competing in the Iditarod, you’ll remember that I stoked the coals of the internet for a few days last week with a co-sleeping article.  I took your thousand comments to heart (thank you), picked and pulled a piece from each one and started to assemble a Voltron sleep training program of my own.

We abandoned the CIO (cry it out) method because, as much as you think I’m a pussy, you don’t live here and this kid shrieks like Mariah Carey getting a bee stuck in her underwear for six hours on end.  Good news for those following at home though, he’s off the boob.  We shifted him to his own bed and I’m set on keeping him there.  I’ve been crashing on the floor next to his crib and slowly transitioning back to my own room earlier and earlier each night.

I’m hoping that by the end of the week I’ll have him convinced that his room isn’t the Fratelli’s basement or some house of horrors – it’s a safe place to be.

A few nights ago around 10 o’clock, like clockwork, my wife’s mouth went agape as she fell asleep sitting up.  Her head was swaying back and forth like she nodded off on the bus and I was darting my eyes back and forth between her and the TV, waiting for the precise moment to turn it off.  It was her night to pick, so we were smack dab in the middle of ‘The Bachelor’.  While timing the channel change with my wife’s breathing, I got sucked into these ladies taking ‘Sean the Bachelor’ to their hometowns to meet their parents.

From my understanding, this might be the only time this dude has a chance to ask the fathers for their blessing in ‘maybe’ marrying his daughter.  There was one dad in particular who described the first time he’d met his daughter (she’s adopted) and how it just hit him — how he felt that love connection — how he knew this was HIS daughter.  He told Sean that anyone who would marry his daughter would have to feel that connection as well.  Then he started crying into his mustache, which got me all up inside my head, full of anxiety about ever having to give my daughter away.

It made me think about a ‘moment’ I had a few days before.

I had my computer set up at the kitchen table and somewhere in between folding laundry and cleaning out the fridge, I was trying to deliver a story to an editor and meet their deadline.  I turned on Hotel Transylvania in the living room, thinking that maybe I could buy myself a few minutes to finish up.

My kids can sense when I’m doing something important, which means that Charlie is instantly pushing, pulling or moving anything that he can possibly stand on, around the house — to get to the DVD player, the knife block on the counter or the Easter decorations (yes, they’re already up for fuck’s sake) on the buffet.  And as I’m corralling him to get things under control, from the other room I hear something that sounds like a dump truck backed into our deck and spilled a load of ceramic tchotchkes onto the kitchen floor.

At this point, I’m starting to get frazzled and before I even get into the kitchen to assess the damage, I’m already threatening Ava with how many timeouts there will be and laying a guilt trip on her — telling her that whatever she’s doing is making me really sad and hurting my feelings.  And then, I walked into this. 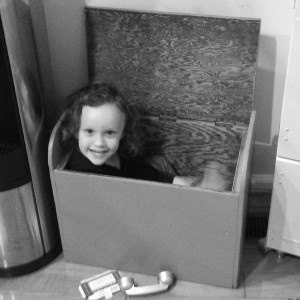 I backpedaled for a minute and forgot about why I was mad in the first place.  I was about to become the whimpering mustached dad from the TV show.

Why?  Because when I looked at her, this is what I saw. 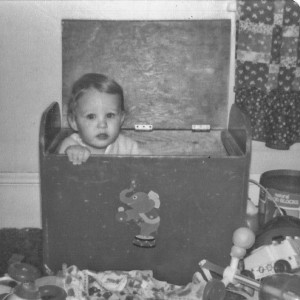 Thirty-five years ago I sat in this very same toy box as a child.  I thought about how far I’d come since being in this position.

I sometimes forget that this innocent little girl is going to grow into a woman.  And how important it is for her to love her dad.  I’m the one who she’s going to compare other guys to as she gets older.

For now, I am the bar.  I need to set the example and help her establish a good moral compass.  I need to be sensitive, yet strong.  I want to show her how to care for those around her and be able to feel vulnerable without losing her confidence.  I want her to be capable of trusting people without being naive… and express herself without worrying about critical judgement.  Beyond all, I want her to be happy, feel loved and remember and cherish the relationship she had with her dad.

If that happens, despite what my sleeping arrangements are, I’ll rest easy.

SHAMELESS EDITOR’S NOTE:  My first book with Penguin Publishing arrives in stores on May 7th, but it’s available now at a discounted rate for pre-order!