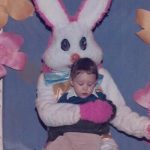 As a four year-old, the weekend before Easter meant another visit to the mall, to stand in line for 2+ hours with the other Pennsylvania Dutch and honor one more tradition, getting your picture taken with the Easter Bunny.  In the late ’70’s, I was lucky enough to be subjected to the strung-out, psychedelic Alice in Wonderland version.  The overpowering smell of Old Spice on his satin bow-tie forced me to close my eyes and hope he wouldn’t pull me down the rabbit hole with his crusty pink mittens, exposing me to his after-hours wonderland of party rodents sacked out on dirty sofas surrounded by black lights.  I thought maybe the random sequence of numbers at the bottom of the photo indicated which number victim I was.  Turns out it was merely a numbering system, so my parents could return after processing for a nightmarish picture that prompted my Mom to ask for a retake.  I had nearly pissed my pants the first time around and refused.  This was the winner. 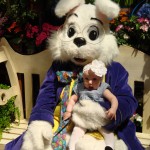 Thirty years later, I found myself taking my daughter for her first prized photograph and I noticed a huge difference.  Ava seemed to get a softer, less emotionally-rattling bunny.  He sat on a handcrafted wooden bench with his floppy story-time ears and prescription glasses, while donning a suave midnight blue smoking jacket.  There was plenty of natural light, spring flowers and the laughter of children emanating from the food court.  Advancements in digital technology got us through the process like greased lightning and there was no line of little screamers.

Easter Sunday at my house was treated like Christmas Day.  My brothers and I would lay quietly in our respective beds in different rooms upstairs, waiting for my parents to give us the go ahead, so we could come down and discover what Peter Cottontail had left for us.  We spent the day before, in an assembly line boiling and decorating eggs, writing ‘dick’ or ‘ass’ on them with a wax crayon and handing them down the line to our Mom to drop them in the various dyes.  I guess her reaction to the defaced eggs was payback for making us sit in a furry pervert’s lap.

We would let the eggs cool and leave them behind to be hidden.  It was inevitable that we would only find 23 of the 24 real eggs, leaving a single hard-boiled sulphur grenade to linger, undiscovered, somewhere in the house.  Days later, as we sat around choking down egg salad sandwiches, we heard a loud ‘damn it!’ from the foyer as my Dad put his toes through a rotten egg, stuffed into his loafer, solving the mystery of the 24th egg. 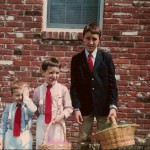 After the egg hunt, my brothers and I were sent upstairs to get gussied up for the annual Easter picture on the side of the house, before we escorted Mom to church.  My brothers got jerked around for years with suspenders, but I was able to get away with my go-to, all-season, all-occasion blue blazer.  We all, unfortunately, were a casualty to the matching clip-on ties which haunted us for several years.  We stood at attention as best we could, pleading for the picture to be taken, as we succumbed to direct sunlight and ragweed allergies. At least for now, it was a little easier for Ava, lying like a diva on the cool, air-conditioned sheets, sticking her tongue out as if she knew what I had gone through years before and was poking fun.

Ava was a little young this year for a full-on egg hunt, but that didn’t mean she couldn’t enjoy her basket.  In a lot of homes, these baskets were probably saturated with jellybeans and chocolate bunnies.  My Easter Bunny was apparently a hippie, choosing to focus on clear skin and a cavity-free mouth, year after year, leaving me with carob chips and dehydrated apple rings. 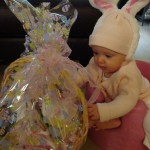 In retrospect, it was probably a smart move that avoided a post-church sugar-induced frenzy amongst three boys.  Since this was Ava’s first Easter and she could barely eat solids, the sugary tradition would have to wait another year to start.  As I sat there watching her, I realized that she could care less about the fancy treasure trove of bunny socks, onesies, stuffed Hello Kitty memorabilia and Care Bears dvds tucked inside the basket.  She was completely blown away by a mere piece of crinkly plastic that surrounded it and I started to wonder if maybe the Easter Bunny could’ve gotten away without all the goodies, but in the end, tradition always wins.

I guess I’ll give her a few years before I break out the suspenders and ask her to meet us on the side of the house for a family picture.  Until then, here comes Peter Cottontail, hoppin’ down the bunny trail…