After almost a year of riding around in my car, facing backwards, staring into the same piece of leather over and over again, Ava finally lost it.  In all fairness, I probably would’ve too.  She staged daily protests and it was time for an upgrade.  California State Law suggests that a child be a year old or twenty pounds in order to face forward in the car.  Don’t tell the Highway Patrol or child services, but for my driving sanity, I cheated it by two weeks. Jen and I had already gone through the painful in-store research process several times before.  It was agonizing walking up and down the car seat aisle, putting Ava in every demo, then watching my wife ask her how she liked it.  Front-runners were determined by whether or not she smiled or kicked her legs.  She’s 1!  We’re putting all of our eggs in the basket of a girl who can barely talk?  Each time, it ended the same way.  With me and my wife polling a bunch of strange parents who walked by, inspiring a national debate in the middle of the store with a bunch of garbage opinions and no final decision. 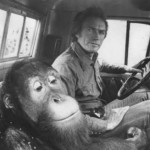 We continued our research online and found a winner.  Something without migraine inducing patterns and it was unisex, so we could pass it along to another sibling. While Jen was at work one day, I decided to drive our little orangutan to Babies R’ Us and take the plunge.  We weren’t Philo Beddoe and Clyde from ‘Every Which Way but Loose’, but it sure felt like it.  Me and my little buddy on another adventure.

No matter what time of day, this place is always a circus.  Unfortunately, they have everything we need.  As I got to the cashier, she asked me if I needed batteries with my purchase.  I was dumbfounded.  Was I a dumbass and had not researched this thing enough?  Did I grab the vibrating version or something?

A handful of tired and agitated pregnant women had gathered behind me in line.  The pressure was on to fake like I knew what the hell I was talking about and win over their approval nods.  Turns out, those cashiers are trained to ask everyone if they need batteries and I guessed right by saying ‘no’.  The situation, however, deteriorated after it took me about six phone numbers to figure out which one our frequent shopper card was tied to.  Oh well, can’t win ’em all.

I decided to pull this thing out in the parking lot and figure out how to install it.  Didn’t I just go through this? This thing looked pretty sweet.  Adjustable headrest, a recline function, extra padding, cubby holes to hide cereal and a cup holder, for those long drives when Ava likes to knock back a few cold ones. 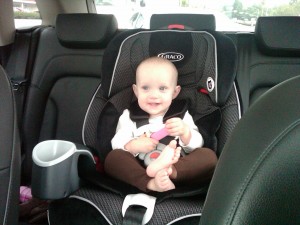 She was overwhelmed to be facing forward, seeing everything that I was seeing.  The screaming had subsided, but I realized that I now had a bigger problem on my hands.   Projectiles.  If she wasn’t happy with the music selection or sitting in traffic, she would just huck a bottle or handful of Cheerios at me.  The inside of my car just became a war zone.  Once a fresh, clean car, it was now covered in dried milk, crushed cereal powder and toys.

Next time you’re out for a drive and you see a car up ahead swerving in and out of his lane, wave Hi.  It’s just me, steering with one hand and swatting at Clyde in the back with the other, trying to locate a dropped sippy cup, lovey or sucker before she goes nuclear.

“It takes 8,460 bolts to assemble an automobile, and one nut to scatter it all over the road.”  ~Author Unknown