As part of my initiative to get out of the house, Ava and I usually start off our day by taking a 2 or 3 mile walk along the beach, listening to the waves of the Pacific Ocean crash on the shore.  Daddy dreams about winning the lottery, lying on a deserted island drinking coconut milk and rubbing oil on the back of Amanda Seyfried.  Ava enjoys being pushed around by her servant and avoiding seagull poop.  I shield her innocent eyes from the elderly Ned Devine’s wearing tiny running shorts, take time to point out the California Poppies and oogle at the long-legged amateur women volleyball players.  She also loves watching the sailboats and on occasion, we see other kids along the way, walking with their parents.

I often wonder if babies could talk (aside from the E-trade commercials) what they might say and it goes something like this:

AVA: I notice you’ve got dog shit in your tire treads and a puke smear on your shoulder strap.  Lookin’ good.

BABY BOY: It’s not even sunny outside, what’s up with your Dad taking off his shirt, exposing his pasty hoagie roll abs and flirting with my Mom?

AVA: My Dad’s working on toning it up, don’t you worry about that.  Why don’t you beat it jerk.  Go home and open up some Gerber’s with those raggedy-ass hillbilly bottom teeth of yours.

The baby boy experiences his first rejection, starts crying loudly and his Mom continues pushing him forward on their walk.

I spent the good part of six months trying to get Ava to pick things up and hold onto them with her little monkey hands, which was a futile process because the reality was, unless she was a genius Stephen Hawking clone, it just wasn’t happening.  However, all of the sudden, one day, she just got it.  Unfortunately for me, she went from not holding anything to having a ridiculous kung-fu grip.  This occasionally caused issues for me as she dialed Japan on my blackberry and changed the primary language on my DirecTV to Portuguese.

The new trend was now smiling and graciously accepting things when I had offered them to her, then five minutes later, tossing them away.  It didn’t matter whether or not she was in the stroller or simply at home in her crib.  My best guess was that I’m a few weeks away from getting pulled over by CHP for a ‘stuffed animal jettison’ onto the I-405.

When Ava was only a few weeks old, my wife bought her these satin patches of cloth made by Swaddle Designs.  We deemed them the ‘baby’ and in my opinion, at fifteen bucks a clip, there was no reason we needed a half-dozen of these glorified hankies.  I think that Jen put a higher bounty on these things than most of the shit we owned and to lose one, would mean televised public castration.   This, in turn, put me in an awkward situation when one of them went missing or turned up covered in dried vomit.  Also included on the ‘lose the toy, lose your balls list’ were the trendy Trumpette shoe-socks and handmade wooden Haba toys.

This particular morning started off like any other, except for the fact that we started a little later than usual and the heat index crept up above 90.  As we maneuvered our way over the hill just North of LAX, it was one thing after the next.  As soon as Ava got bored, she began tossing items from the stroller.  First it was the floral headband, then the socks, then it came down to any loose toy within reach.  My reaction time was akin to Bruce Lee, diving left and right, while continuing to push, scooping up valuables from the dirt like it was my day job. 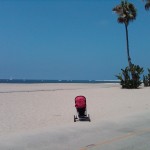 But even Jun-Fan needs a mental time-out, so as I pushed her over the hill towards the beach, I took a second to unfocus on her and dial in on the watery landscape that was so beautiful.  As luck would have it, I happened to miss a few of the most important things being tossed overboard.  We continued on down the hill towards the beach for about a mile until I noticed the stroller getting lighter and Ava starting to cry.  I took a pit-stop on the strand to assess the situation.

Normally I wouldn’t give a shit about a piece of fabric, a midget-tube sock or one of the million toys we had, but I knew how much my wife valued these things and at some point I’d have to explain the loss, like a failed earning report to the CEO.  I sprung into a panic and thigh-blasted back up that sandy dune to backtrack our route and hope that a bum didn’t pick up the ‘baby’ in the last  8 minutes that I’d lost it, using it as a dumpster dinner napkin or makeshift underwear. 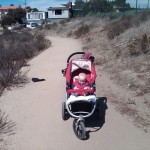 As we blazed our trail, I did the power walk like a Suzanne Somers workout video, my moobs bouncing (kidding) as I dashed across the esplanade and back onto the initial hill where I stopped to take that mental break.  As I crested the hill, I noticed a trail of items, all within 15 feet of each other.  I patrolled the crime scene, collecting evidence.  First the sock, then the toys.  Finally, there it was, hung up on a succulent plant, the much heralded ‘baby’.  Untouched.  No bums in sight.

I avoided losing my balls in a public setting and even though we were less than five minutes from home, I took the risk and doubled back to finish our morning routine.  I activated my eagle eyes for the rest of the trip to insure that we came home with zero loss.

Later that night, when Jen came home from work, she asked how our day was.  Ava and I both twirled a ‘baby’ in the air and spared her the agony of  knowing that we almost lost one.  Our day was awesome Mom!