From time to time, I can’t help but remind my wife that she intentionally withheld genetic information about herself before we got married.  She never mentioned the bum hip until the honeymoon was over and also did a pretty good job of hiding that second toe that is longer than the others.  I never made an effort to conceal my flat feet, in fact, I made it widely known that I’d probably never be drafted to fight in a war because of them. She also misled me on other vital intelligence, which was that she was bald until she was 2 or 3 years old.  Being bald later in life is fine, because you’ve matured into an adult and have acquired certain features that make it easier (sometimes) for people to distinguish your sex.  As a baby, unless you have a girls ears pierced, it all comes down to what you’re wearing.

When Ava was born, someone gave us a chronologically ordered box of Stella McCartney onesies that had the days of the week embroidered on the front. 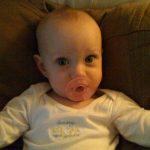 These were brilliant because I was stuck in the time continuum that is being a ‘stay-at-home’, with the days and nights bleeding together to form one long day that lasted several months.  They helped me remember when I had bills due and also made it super easy for the fashion illiterate (me) to pick Ava’s outfit for the day.  These quickly became stained beyond recognition with milk and purple yogurt melts, so I had to put her in some new duds so people didn’t think we were a band of dirty gypsies. 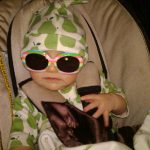 It only took a few trips around town running errands to get a handful of assholes asking me how old my son was (it’s a girl) for me to figure out that I was doing something wrong in the wardrobe department.  I didn’t grow up with any sisters and didn’t initially consider the fact that a girl might need accessories to go with her clothing.  The only accessory I had while growing up was an Incredible Hulk belt which I wore past the point of using the factory issued holes, forced to create new ones by hammering a nail through it.  I thought the quick fix might be to avoid dressing her in blues, browns and blacks, but that didn’t seem to do the trick.  It only took about 1 or 2 Facebook uploads of my daughter dressed like a young Frankenstein on the internet, for my wife to intervene and come up with an aggressive style recovery plan. (EDITOR’S NOTE: HOLY SHIT.  I just found this picture of myself as a kid.  Not only did I have the Hulk belt keeping my cords yanked to the ceiling, but I also revved up the MJ ‘Thriller’ album cover t-shirt, accompanied by the dignity crushing red, white and blue headband.  Did someone let me out of the house like this?) 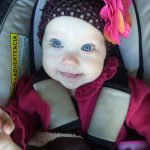 Jen decided that fancy flower headbands and sunglasses would be our crutch until she was old enough to get her ears pierced.  This sounded like the logical solution to me, except on those days where she got carried away (almost every day) and the outfit she put together looked as if Richard Simmons and Elton John had exploded onto our child. The trips outside of the house instantly became more complicated, as I emerged from my car with a living Crayola color palette stuffed into a Bjorn.  I now had the polar opposite child, vibrant feminine ensembles with added headpiece flare.

The one big downside of dolling your daughter up likes she’s going to audition for ‘Chicago’, aside from being unable to blend into society, is that it tends to create some weird power of human magnetism. 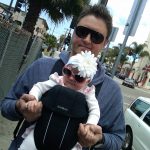 Ava was bait on a hook and it seemed as if we were charter fishing for grandmothers and pregnant women.  We caught a ton of them and hit our limit everytime we went out.  It’s almost as if there was some sort of unspoken obligation to invade our personal space and sneak attack us with coochee-coos and cheek pinches.  Over the past few months, we’ve learned how to defend ourselves by setting picks on overanxious expectant mothers and eliminating the seniors via the ‘Elderly Heisman‘.

Being the Dad of a walking floral arrangement is challenging, but at least you can take the bolts out of her neck, because she’s no longer a Young Frankenstein.