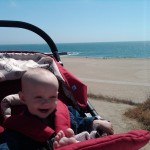 By the summer of last year, Ava and I mastered our morning routine of walking to the beach.  It was the same route each time, up and over the hill and onto a strand that runs along the ocean.  After awhile, it became obvious that we weren’t the only people with the same idea.  We saw the same people so frequently, we became ‘regulars’, and almost felt obligated to wave every time we passed one another.  Mostly nannies and retired people, the only ones sharing the same idiotic schedule as us.  I felt like a team on ‘The Amazing Race’, in a power-walking and waving ‘hi’ competition that no one could possibly win.

We cruised into August with dozens of hikes under our belt without loss or injury.  Sure, we had some close calls, but we were still undefeated for the season and making our mark on the circuit.  One particular Friday in late August started off a little different.  I began my day with a chain reactions of bad luck.  First, I ran out of Q-tips in my bathroom.  Then, I tore my breakfast omelette on the ‘flip’ and was forced to scramble it.    After that, while tying my sneaker, the lace snapped and I punched myself in the neck.  I’ve had a few of these days before and knew there was more to come.  Somehow, kharma had joined forces with the world to tag-team me with a beating, but I wasn’t going down without a fight.

As Ava and I stepped outside, we were met by a fierce wind coming off the beach.  I quickly turned the stroller back inside and set us up with some sunglasses and hats.  As we crested the hill and descended onto the sand, we were caught in mini tornado of garbage from the beach.  Pieces of sand and plastic, used condoms and tin foil weed-pipes swirling around us.  I pulled the canopy on Ava’s stroller down to shield her.  While my aviator sunglasses made me feel like a fighter pilot, their protective attributes shit the bed.  My eyes were flooded with filth and I struggled to stay on my feet.  I ran home to wash my face and flush my eyes.

As I awoke on Saturday morning, I struggled to open my left eye.  It was as if someone had sneaked into my bedroom overnight and krazy glued it shut.  Luckily, the optometrist down the street had an opening.  With a severe corneal abrasion, but no sign of debris in my left eye, I was prescribed drops and sent on my way.  After a few days I was back in the game and could see well enough to continue our morning ritual. 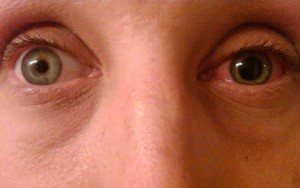 The rest of the month came without incident, but September had different plans for us (me).  For the second time in 2 months, I got hit with the same thing, this time in the other eye.  Ava and I went straight to the same optometrist without an appointment. I couldn’t open it at all and it looked like I had been held captive in someone’s basement dicing onions.

The old people in the waiting room were stacked up like jets coming into LAX.  The receptionist told me that there would be a wait, as these mummies were all retaking eye exams for their driver’s license.  I didn’t have a bottle with me and we were crossing over into nap time.  This was about to get ugly. 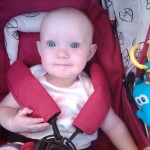 This picture was taken before the epic breakdown.  Sure, she looks like she’s happy and content, but as we got called back to the doctor’s office for the examination, she lost it.  The doctor recognized us from a few months ago.  She engaged in small talk, yelling over the screaming baby, asking generic questions like ‘how old is she now?’ and ‘Is she walking yet?’ and I felt like killing myself.

I encouraged her to get on with it and dilate my pupil again, which throws off your balance, gives you insane light sensitivity and makes you look like Marilyn Manson.  She lined my face up with a medieval-looking eye machine and found something.  It was a sharp piece of debris jabbed into my eyeball and I needed to sit perfectly still while she used a pair of forensic tweezers to pull it out. 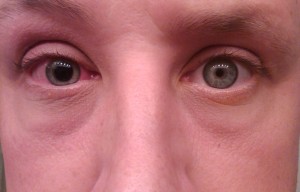 I took a quick minute to calm Ava down and preoccupy her before this doctor went digging in my eye willy-nilly.  I loaded her up with some makeshift toys; a bottle of contact solution from the trash and a blown up latex glove.  I was massively unprepared for this.  I went back to my seat and watched the doctor get warmed up with her tweezers.  Ava was already fussing and I could hear the fake toys already being tossed overboard.

I knew that as soon as she ran out of things to throw on the ground, it would move into stage two of her breakdown.  Crying would ensue and that made me nervous.  I didn’t need Doc pressured by a screaming baby while she dinged away at my eyeball with an icepick.  In a true, uncaptured cinematic moment, Ava let out a deafening blood-curdler at the exact moment the plastic was pulled out of my eye.  My balls went up inside of me and I prayed for the best possible outcome.  If I went home with a glass eye, my wife would have my ass. The extraction was successful and I celebrated my doctor’s ability to perform under duress.  Since I left the house without my sunglasses, she issued me some disposable plastic welding glasses  that acted as a supplement until I got home.  I stepped into the lobby, where I was met by scores of old people, all wearing my same welding glasses.  They waved, I waved back.  We were now ‘regulars’ at the eye doctor too.