This post is sponsored by OFF! ®, but all the opinions are my own. Ever since we left Los Angeles and moved back East, the days are gone where I can count on an almost-arid, sunny ’70-degree day.

If you’re not familiar with the (just outside) watershed region of Maryland, the months of June, July and August can be insufferable. Most days it’s 90 degrees with 95 percent humidity; thick and muggy air, violent thunderstorms and the bugs that come with it.

When my friend and occasional running partner, Andrew, invited us to his house for a Fourth of July barbeque, my initial reaction was a squinting of the eyes and partial grimace. On one hand, who can turn down smoked meats, fireworks and great company? On the other hand, am I going to wear a full-on beekeeper’s suit to his house to fight off the onslaught of Maryland’s highly attentive mosquito community?

The fact is, bugs tend to congregate at the highest point on your body. So, like a lot of people I generally feel like I’m shuffling around with a swarm of mosquitoes around my head a la Pigpen from Peanuts. More to that point, I’ve been known to walk around in public with my hands raised in the air, above my head, to keep mosquitoes out of my ears, but it’s ridiculously tiring and my wife is against it. She says I’m embarrassing her….psssh.

Plus, what you don’t know is that to keep my skin soft and supple, I tend to use a lot of lotion on my face and freakishly hairless lady legs. This creates a Thanksgiving feast for my gang of buggy tormentors.

Luckily, my friends at OFF!® shared a few party favors for me this year. 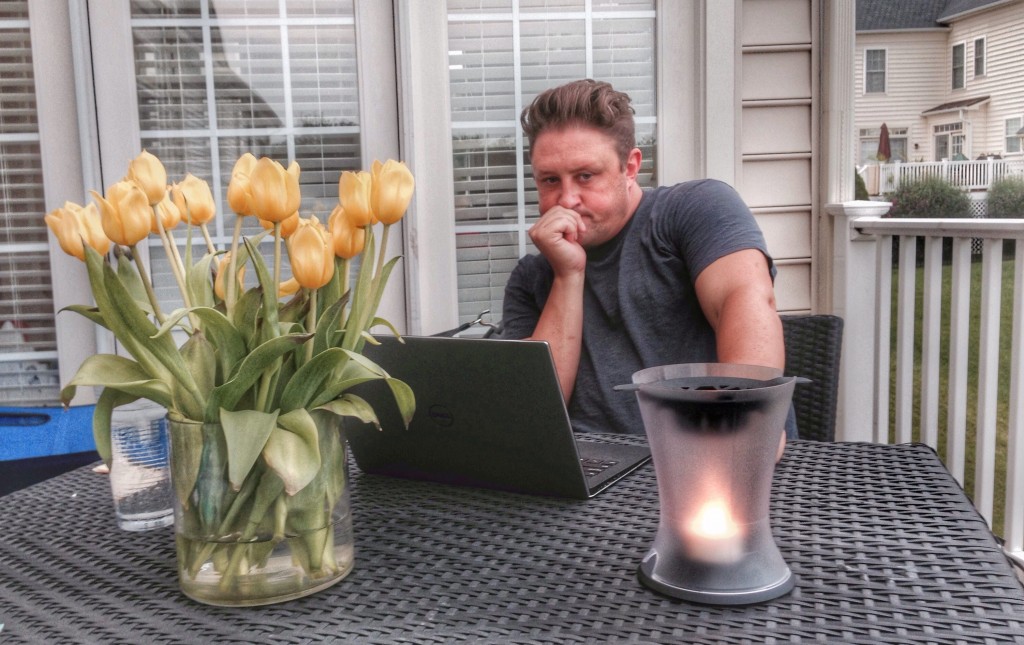 I’ve used their products thousands of times in the past, otherwise I’d be confined to my house. According to a survey by OFF!®, 67 percent of Americans don’t think they spend enough time outside. I count on OFF!® to help me get back out there this summer. So I gathered up our little circus, loaded our wagons and camping chairs into the truck and headed off for Andrew’s place. Of course I took along my OFF!® Mosquito Lamp and OFF!® Clip-On™ Mosquito Repellent.

To my surprise, my comrades were genuinely interested in the lamp. “Dude, I’ve seen these at the store. Do they work?” asked Steven. All of the sudden, Andrew and Adam were equally attentive, and I felt like I was on an infomercial giving a backyard product demo.

While our wives were inside, the men were outside talking about repellent products and Andrew’s new toy, a ‘77 Bronco. As men often do, we felt the need to have him pull his truck out of the garage so we could pop the hood and take our best and mostly unsuccessful shots at identifying the different parts of the engine. For my own comfort and that of the others, I brought the OFF!® Mosquito Lamp with us and continued my demo. Because that’s what nice guys do.

With dusk approaching, Andrew and I volunteered to start walking the camping chairs across the street, into the park, to stake our claim in the grass for a fireworks display.

This is when I put on the OFF!® Clip-On™ Mosquito Repellent. After I twisted, a little fan turned on and dispersed an odorless protection. I wore it with pride and could hear the murmur of folks around me, commenting on how smart I was. I’m telling you in all seriousness, I spent almost seven hours outside on July 4 and somehow was not covered in bites. No wonder, since OFF!® Clip-On™ creates head-to-toe protection for up to 12 hours.

My message to you is that if you’re planning on enjoying your summer without being covered with bug bite bumps, check out OFF!® to see which products match your activity.

#TBT to July 4th – hope you all had a great Independence Day!

If you’re interested, help out OFF!® and the Backyardsman, Flint Haycock. Together, they’re on a mission to help indoor-dwelling folks get reintroduced to their yard spaces. And there’s no better way to do that than giving someone the opportunity to win $10,000 towards an epic backyard makeover.

Also, every week one lucky person participating in the backyarding photo sweepstakes will receive a prize pack worth $250. Simply post an Instagram photo of your favorite outdoor activity and hashtag it with #GetBackOutThere and #OFFSweeps for a shot at the title. This is your final chance to enter, and you best check out the official rules.

Good luck, have a great summer and enjoy the outdoors, mosquito-bite free. #sponsored