It’s that time of year again.

The Super Bowl is in our face, which also means that pitchers and catchers will soon start reporting for spring training.  Five-layer bean dip and cheap beer has us hiding in our friends bathroom playing the ass horn.  The NFL playoffs have brought us some amazing moments thus far and this Sunday, the big game shouldn’t be much different.  There’s something nostalgic about everyone gathering around the TV to watch the singing of the National Anthem with fighter jets screeching overhead.  Big plays, Janet Jackson’s boob in HD at halftime and a new GoDaddy commercial to boot.  It’s hard not to take a trip down memory lane and revisit some of those epic sports moments that you were lucky enough to be a part of.  Thanks to my buddy Tommy at The Life of Dad and Rite-Aid, I have the opportunity to go full-blown diarrhea-sports-mouth about mine AND sweeten the deal by offering you a chance to win something really special.

For the most part, the greatest sports moments in my life have come up a little short, IF they’ve even happened at all.  Being born and raised just outside of Philadelphia, I’ve always been a fan of the Phillies and the Eagles.  Of course the Flyers and Sixers are in the mix too, but I can take or leave hockey and basketball.  It takes stamina and perseverance to be a Philly fan.  Year after year, we brush off our injuries and bonehead plays and blow a kiss at any attempt of making the playoffs.  We fight the cold weather and turn our depression into violent rage, throwing snowballs and batteries at Santa Claus when he comes down Broad Street.  We smash our artery-clogging cheese steaks into our mouths with sad eyes.

As a child, aside from the 1980 World Series win, I got the feeling that I couldn’t rely on my teams, so I tried to create my own ‘greatest moments in sports’.

One of my first attempts was when I played centerfield for the Lions in little league. 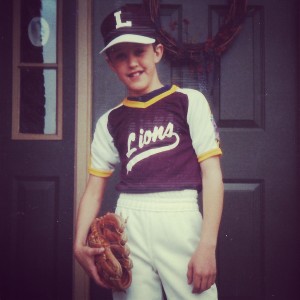 I remember this specific Saturday afternoon game like it was yesterday.  Spring was in full bloom, with the intoxicating aroma of freshly cut grass and concession stand hot dogs.  There were two outs in the bottom of the ninth.  I stood in the outfield with my hands on my knees, poised for action.  The pitch was fired towards home plate and a distinct crack of the aluminum bat sent a fly ball high in the sky, directly towards me.

This was my chance to bring the crowd of anxious parents in the bleachers to their feet, to make the winning catch and be carried off the field on the shoulders of my teammates, like a hero.  It was a monster of a shot and I realized that it might have a chance to leave the park, but I was determined not to let that happen.  I got on my horse and charged towards the fence, glove in the air, head turned to monitor it’s trajectory.  I extended my Rawlings as the ball continued it’s downward journey to earth and just as I was about to save the day and win the hearts of every teenage girl in the stands — everything went black.

I had run full-tilt into the outfield fence, hitting it with such force that I had knocked myself unconscious and broke my front tooth in half.

I awoke to find my entire team and the coaches standing around me like Dorothy in the Wizard of Oz.  They were all there, including my mom, on bended knee holding a Ziploc bag full of milk, with my tooth inside.  Evidently I was out long enough for them to search through the grass for it.  The ball had hit the top of the fence and disappeared, along with my hero status.  At least I didn’t shit myself.

The following spring I went to a Phillies game with my neighbors.  It was one of my first visits to Veterans Stadium.  I brought my glove.

For some reason, even though I was incapable of catching a little league pop-fly, my delusional self figured maybe I had a chance at nabbing a foul ball from a big league slugger.  I lasted seven innings, until my bladder was so full with soda, that I thought I might soak my pants – which I couldn’t endure.  So I ran to the bathroom, standing in a long line of drunken old men waiting to go shoulder-to-shoulder at the trough and relieve ourselves.  I skipped washing my hands and ran directly back to my seat, only to have everyone around me tell me how a foul ball had just landed in my seat and bounced into the hands of the lady two rows behind me.  Hey universe, are you kidding me?

So maybe I just wasn’t meant to make any big plays of my own.  It’s pretty sad when your biggest moment in sports comes when you’re in your thirties and has nothing to do with winning a trophy or being carried off the field under fireworks, but rather the quality of seats you have at the game.

Over the years, I’ve tried to give the Eagles an equal chance.  Every year I get excited about our chances, only to end up looking like a half-deflated birthday balloon, crumpled up in a disheveled heap with my head in my hands come January.  I’ve definitely had some ‘fun’ moments along the way, attending games with my brothers and enjoying the mess in the parking lot. 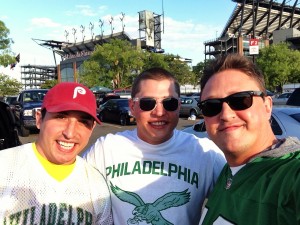 But I’ll go as far as to say that I haven’t had that ‘greatest’ moment in sports yet.  Am I forever doomed?  Will I be forced to attend my games like this? 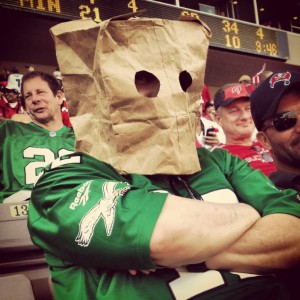 If you’re laughing at me right now (Giants and Cowboys fans surely are) or have become completely depressed after reading this, I’ve got something that might cheer you up. 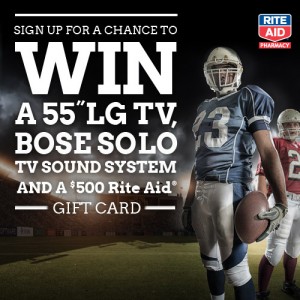 One lucky reader has the chance to win by entering the Ultimate Big Game Party Sweepstakes.  Just visit this site between now and 2/9 for your chance to win a 55″ LG TV, Bose sound TV system and a $500 Rite Aid gift card.  You can come back every day from now ’til then for additional chances to win Big Game-worthy prizes.  Hook it up!

EDITOR’S NOTE:  I am being compensated by Life of Dad, LLC for my participation in the #BigGameChallenge promotion.  Sponsored by Lunchbox, the #BigGameChallenge sweepstakes gives anybody the chance to win a spectacular home viewing system.  Clearly, the stories and opinions above are all mine!