It started last August with a knock at the door.  I remember it vividly because the UPS driver banged on it like he was the DEA executing a search warrant, waking Ava up from her nap.  What can brown do for me?  TRY NOT TO BANG ON MY DOOR LIKE A CAVEMAN NEXT TIME YOU STOP BY WITH A PACKAGE. When I opened up, the conversation went something like this:

ME: Yeah, I can see that man.  You’re wearing all brown and holding that package scanner.

I realized what he meant, as he had dragged a box the size of a refrigerator through a labyrinth of hallways in our complex.  I wasn’t expecting a package and in my head I was thinking this might be some sort of elaborate prank and once I got the box inside, the guys from ‘Weekend at Bernie’s’ would fall out with Ed McMahon’s corpse, telling me I won the Publisher’s Clearinghouse Sweepstakes.  The thing was gigantic, but surprisingly didn’t weigh that much.  Maybe that UPS guy needs some Wheaties.

I closed the door and ran to the closet like a kid on Christmas to get my Leatherman multi-tool, a gift I’ve had for five years and only used three times.  I gutted that box like a pig, and there they were.  700 multi-colored plastic balls.  WTF was happening?  Were we shooting ‘Double Dare’ in my living room next week or what?  I called my wife at work, wondering if this was one of her ‘endeavors’ that I wasn’t privy to.

It was confirmed.  They were for Ava’s first birthday party.  It didn’t stop after this.  I didn’t even see it coming. 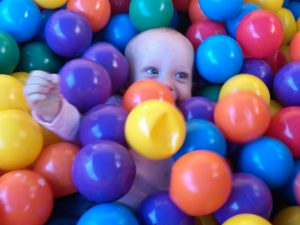 Over the next few weeks, with so many repeat deliveries, the UPS guy and I felt like estranged brothers.  I was five minutes away from bbq’ing with this guy on the weekends.  She bought a 4-way acrylic tunnel, 100 inflatable butterflies and beach balls, along with not one, but two specialized monogrammed outfits for the occasion.  One for before the cake and one for after. She worked tirelessly to get these custom goodie bags donated from Customized Girl for Ava’s twenty friends, that included wooden learning toys from Haba, tees and designer socks from Trumpette, ‘The Very Hungry Caterpillar’ toys from Eric Carle and of course, for the girls, some great flower hats and headbands by Brookie Bows, not to mention a bevy of other amazing baby products that my wife considers ‘Ava’s favorite things’. 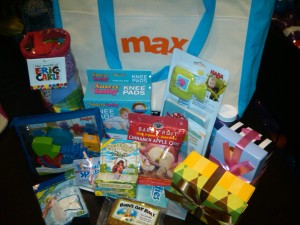 Her friends weren’t older than 2.  What in the hell was this?  This party was going to be bigger than my 21st birthday.  Admittedly, I spent my 21st drinking Prairie Fires and Jager, throwing up in a trash bag and being carried out of a backwoods bar in my overall’s, BUT STILL, this was nuts. 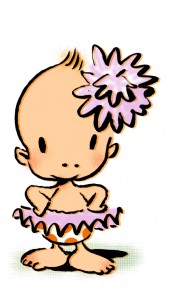 We started to hoard all the components of the big bash, which took up significant space.  The Swag bags were being assembled, a menu was being constructed and our parents had booked their flights.  We asked Jen’s uncle, Bill Mayer, to design a character of ‘Ava’, which we used for bag enclosures and direction cards.  An extremely talented illustrator, Bill gave us something that added a great personal touch.

The mood over the weekends leading up to the event was that of a sheer panic and chaos, with a ton of last minute shopping and planning.  Our dining room began to remind me of an episode of ‘Hoarders’, but without the dead, flattened cat underneath all the gift bags.  Just stuff on top of stuff.  It was perfect timing for our respective in-laws to come into town.  We needed reinforcements.

It was organized chaos as my Dad and Father-in-Law assisted me in grocery shopping for the party.  I made the decision to cook rather than have it catered, which turned out to be one I would regret.  We arranged to have the party on our sundeck, which was about a eighty yards from the kitchen.

On the morning of the party, we put our relatives to work, having them truck items back and forth relentlessly for almost three hours.  I was in crisis mode, running around the kitchen in my underwear, cooking food for a hundred people.  Halfway through, I accidentally cut my finger to the bone with one of our kitchen knives.  I stopped (to make sure my finger wasn’t on the floor), took a deep breath and counted to ten.  I snapped on some rubber gloves and worked through it.  I was too close to lose this episode of ‘Iron Chef: Battle 1-yr olds birthday party’.

We expected guests by 11am, the clown (sure, I said clown) by noon and cake at 1pm.  At 10:45am, I was still grinding through, putting the finishing touches on an Israeli cous cous salad.  I flew around the kitchen like a wild man, carving ham and turkey, uncovering crudites and folding napkins as my wife called from the sundeck to remind me that I had 4 minutes to get to the party.  I gave myself a truck-stop rinse in the bathroom, clapped some cologne on my face and headed downstairs to greet everyone.

All of this hard work was about to pay off.  Right?  RIGHT!?