Several weeks ago, I thought it might be fun to take Ava to the Long Beach Aquarium of the Pacific to walk around, check out life underwater and most importantly, get outside and add some pigment to our fragile egg white skin.  I still don’t know how, but I roped my 26 year-old bachelor brother into going too.  I thought it might be good for him to have some bonding time with his niece and since he’s a bartender at a cougar lair in Venice, I could use a 45-minute car ride to hear about his latest sexual conquests to make myself feel young again. 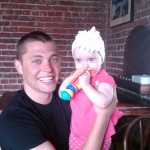 We stopped at a local breakfast joint to grab a few sandwiches before we hit the road.  It didn’t take long to realize he was a regular there, as the Korean owners started shouting at him as soon as we walked in, addressing him as ‘Mr. Butters’.  Who would’ve guessed that my brother was the Norm Peterson of the egg sandwich place.  The owners didn’t make much conversation and it was awkward as we waited for our eggs to be cooked, listening to them replace popular song lyrics with the words ‘Meesta Buttas’, as they sang the two words over and over again.

We merged onto the 405 south, which was already an asshole factory at 9:30am.  We missed the calculated lawlessness of the first rush hour and were into the second shift, senior citizens out refilling prescriptions and a bunch of Holly (and Henry) Homemakers reaching behind the seat of their SUV’s to swat at their kids while bouncing in and out of lanes.  Our conversation in the front seat started to sound like a ‘Dice’ Clay routine with Ava in the backseat sponging it up, so I faded some Radiohead Lullabies to the back, in hopes it would drown out our improprieties. As we pulled up to the aquarium parking lot, I confirmed to myself (and my brother) that I had made an epic decision by visiting on a weekday.  I went on and on about it as we drove around the empty parking structure, looking for the elusive ‘next to the elevator’ spot.  It felt like one of those magical moments where we were in the museum after hours by ourselves.  Kids in a candy store.  We noodled around as if we were on vacation, taking our time to pose for pictures in front of the aquatic themed elevator entrance.  We emerged on the bottom floor and approached the aquarium when it hit us like a pie in the face.

Was this National Field Trip Day?

Fourteen giant yellow school buses, parked in tandem around the pick-up/drop-off loop.  In between those buses and the entrance, were hundreds of screaming elementary schoolers with a half-dozen overpowered chaperones.  It was chaos personified.  Their clipboards and whistles were like pissing into the sun, absolutely useless.  Travis and I discussed our options.  We had come this far and our instincts told us that none of the kids had gone inside yet and if we pulled a Usain Bolt to the ticket window, we’d have a head start on them through the exhibits and still salvage a peaceful outing.  Running in a loaded Bjorn is like one Siamese twin running a race while the other one just hangs around watching.  Nevertheless, I lowered my head and awkwardly gunned it towards will call. 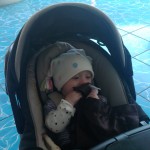 We picked up our tickets and made it to the lobby, where we realized that our instincts were garbage.  It reminded me of being stuck in the hallway in between classes.  Half of the kids had already gone in and what we saw outside was the second wave of hyperactive midgets.  It only took about fifteen minutes for my brother and I to be mistaken for a pair of gay Dads by one of the chaperones.

CHAPERONE: ‘It’s so great what you guys are doing, I’m so happy for you!’

ME TO MY BROTHER AS WE WALKED AWAY: ‘What the hell was that lady talking about?’

MY BROTHER TO ME: ‘Oooooooh.’

We decided to put a few feet in between us and stop holding hands, because we were clearly sending mixed signals. 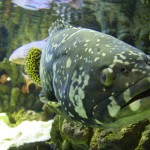 These chaparones were in trouble.  I haven’t seen someone get worked over this bad since Kimbo Slice.  It was total anarchy.  As we dodged an ongoing game of ‘tag’ that was dragging through the Southern Pacific exhibit, I was witness to at least one successful ‘pantsing’ of a young scholar, who promptly yanked his sweats up and went into a full-blown martial arts rage on his buddy.  I snapped one picture of a fish as my brother and I shared a simultaneous look of concern, not for this young man’s self-esteem, but rather why we paid $22.00 for tickets to a pre-adolescent mosh pit.

We scorched through the Sea Otter Habitat and Shark Lagoon with kids bouncing off of us like meteorites.  As we turned our final corner, a crazy middle-aged Ginger with super thin hair came at me like she was going to take my wallet.  Without hesitation, she started touching Ava’s face while in the Bjorn, which threw me into panic mode.  I knew she wasn’t going to like it, but I powered up a trunk-twist and blasted right through her.  I was bummed that we had to skip Lorikeet Forest, but I probably would’ve commanded those birds like Falcons, to go and peck out the eyes of all those little brats.  Once outside, I considered asking for a refund, but the immediate solace of the car was the winning voice on my shoulder.

I’ve become used to this madness in the last year as a SAHD, but I felt bad for Travis, who may be permanently scarred and never have kids of his own.