As children, my parents would insist on taking me and my younger brothers to the local shopping mall to see one of ‘Santa’s Helpers’ a few days before Christmas.  It was the only mall for miles in an extremely rural area, so it kinda came off as a hillbilly meet-up.  I couldn’t believe my Mom had the patience to brave the snow, ice and salt covered roads simply to fulfill an ongoing tradition for us. At what point does the novelty wear off?  I look like I’m about 15 in this picture, way too old to be in this man’s lap, and it was getting embarrassing.  We had to see Santa, we had to get the picture.  We couldn’t challenge the integrity of this yearly event.  Sometimes, we would wait for an hour or more, trading stories with the other hayseeds, watching my brothers wrestle over a walkman on the dirty mall floor, my Mom hanging onto our so-called tradition by a thread.

Eventually it was our turn and we could see the glow on Mom’s face as we each posed for the camera.  After confessing to Santa that all I wanted for Christmas was world peace (Legos, Michael Jackson ‘Off the Wall’ album),I couldn’t help but wonder what Santa’s helper did in the off-season. His aroma was that of shitty weed, his belt buckle was plastic and the fake beard was bordering on pathetic.  How did Mom think this was legit?  It didn’t matter, because it was tradition. 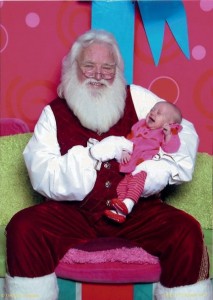 I guess there’s a sliding scale of when you start and stop these things. We (my wife) decided that, with Ava, we would start immediately.  We tried to kill two birds* with one stone by going to Atlanta’s Lenox Mall, for both Old St. Nick and the ‘Pink Pig’.  An 8-week old baby certainly needs to sit on Santa’s lap and give him a telepathic Christmas list. That definitely makes sense.

Ava didn’t realize it, but she had lucked out.  Look at her Santa.  He was the Quaker Oats of Santas, well-groomed and polite.  He donned a clean, festive velour romper and reminded me of Kenny Loggins.  Unlike the homicidal stare on my Santa, Ava’s had a playful squint, like something out of ‘Miracle on 34th St’.  My how the times have changed.

As Ava squirmed and shrieked, I wondered why we were putting her through this.  I also thought about the fact that it wasn’t over yet.  Time to kill the second bird*.

My wife’s family tradition was to ride Atlanta’s own, ‘Pink Pig’.  In the early 1950’s, this amusement park ride of sorts, ran as a suspended monorail that looped around the ceiling of the toy department at Macy’s. After realizing that it’s rusty antiquated design had turned it into a small person decapitator, they replaced it and moved the new, safer version to the roof at the Lenox Mall.

We got there a half-hour before it opened and were already 150 people deep. Now that  you’ve got a kid, get used to standing in line for shit that doesn’t matter.  While waiting, we got pictures with the ‘Priscilla the Pig’ mascot and counted all the pick-up trucks with bass boats attached to them in the parking lot.

After an hour wait, we got to the front and my wife realized that there was a height requirement and infants that couldn’t sit up on their own weren’t allowed to ride the train.  I closed my eyes and pretended I was dancing in a meadow, pushing away the urge to start throwing haymakers at Macy’s employees.  I went off on my own to do a little shopping and Jen must’ve slept with the train operator, because they allowed her to sneak Ava on and got her the ‘I Rode the Pink Pig’ button in the name of tradition. 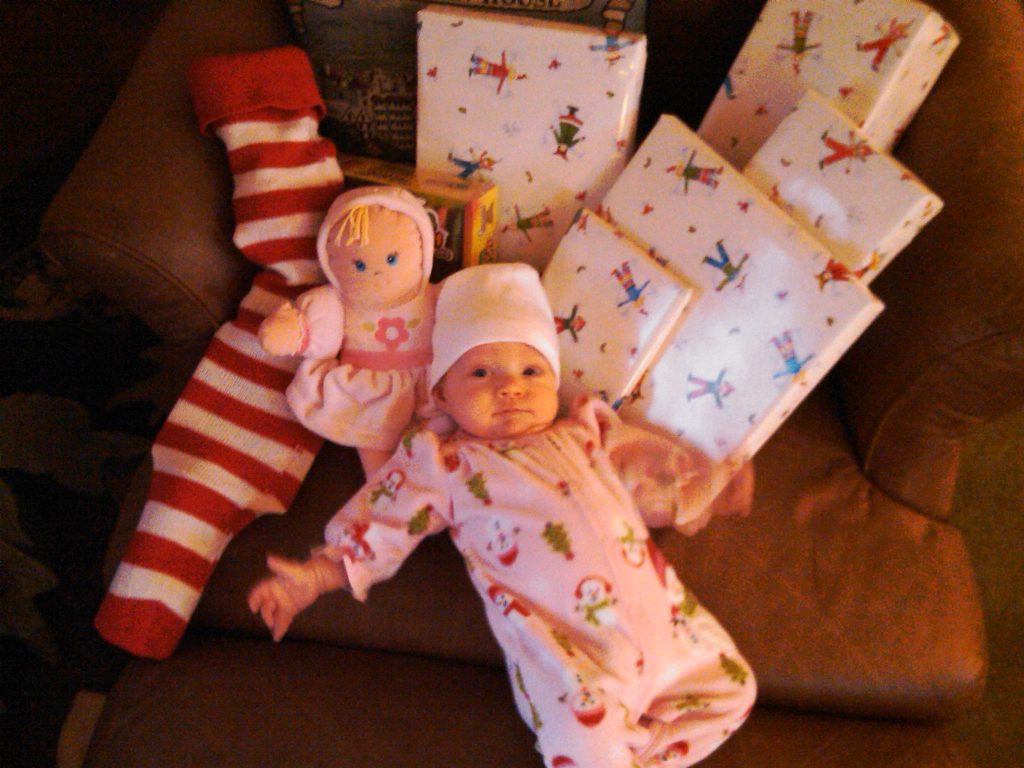 We took Ava home and got her ready for bed.  I don’t think she had a clue what we had been through.  She either slept or screamed through everything.  If you can figure out which baby she is in this picture, you’re on your way to making a great parent.  HINT:  She’s the one with the Russian babushka sleep cap.

Looking back on these pictures made me feel good that we took the time to establish tradition on her very first Christmas.

* No birds were killed during the telling of this story.