On the morning Ava turned 9 months old, from down the hall I heard Jen’s voice echo ‘could you get a bottle ready’ and I knew it was the end of an era.  I picked my flat feet up from the ottoman in the living room and it was then and there that I experienced my last 20-minute Dad furlough.  It was also a wake in some regard, as we all said goodbye to Jen’s homespun Dolly Parton juggs.  At the risk of being punched in the face by my wife, I created an analogy once before in which I referred to the juggs as my prized ’67 Camaro, whose keys I had turned over to my punk daughter the day that Jen’s milk came in.  After an onslaught of constant lactation for 278 days, my muscle car was finally returned, but as I suspected, it came back with some extra mileage and deflated front tires. 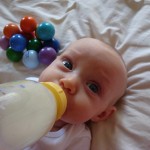 I had taken advantage of those 9 months of breastfeeding, by wandering off, 20 minutes here and 20 minutes there.  I would retreat to my bathroom office or even just walk in slow-motion to the mailbox, enjoying the comfort of having a few minutes to myself with no immediate responsibility.  Our freezer was rapidly being depleted of its travel-sized pillows of stored breast milk and the knocker pump would eventually make its way to the shallow grave that is our storage facility.

I was now a novice kitchen chemist, analyzing the chart on the side of the Similac container telling me how to mix precise amounts of organic powder with filtered water.  It’s molecular composition is milk, soy and a shit-ton of oils and stuff that end in ‘trate’ and ‘phate’ combined to provide vital nutrients.  The reality is that it may as well be used by the Native American Indians to color or stain delicate garments, as I discovered after ruining the collars of several ‘good’ outfits with it’s down-the-neck seepage. 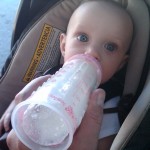 As we moved into the formula phase, I experimented with bottles, inserts and nipple flow.  The flow became a major issue as time went on.  Ava inherited her Mom’s big mouth and with that, came larger intake valves.  We quickly progressed from slow to medium and onward to rapid flow.  With the slow and medium nips, I was able to add hot water to an empty bottle of powder and give it a good shake over the kitchen sink, using my thumb to cover the top.  After we moved to rapid, I realized that after a shake or two, my Paul Bunyan thumb was overpowered and I found myself fighting to keep control of a spraying bottle, whizzing around the kitchen like I was spraying teammates in the locker room after winning the pennant.  The techniques changed rapidly and so did her diet. Along with nursing, around 4 months our pediatrician told us to start trying out rice cereal and purees to supplement her diet.  It’s a good thing I didn’t have a full-time job, since our feeding time doubled and my clean-up time tripled.  I think the bib companies got together one day and decided that we might all be dumb enough to buy into their concept.  As we tried out different purees, my little buttercup became a promising food finger-painter, leaving her artistic signature on anything within arms reach, her hair and face, along with mine.  I put my frustration aside and sat quietly, contentedly, in my co-pilot chair next to her covered in spoonfuls of Healthy Times Orchard Fruit Peekaboo and Cabana Banana. 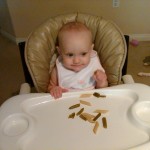 Around 6 months, Ava left the barf-colored purees in the dust and raced right onto solids.  Instead of smearing her food, she had graduated into throwing zucchini overhand like a wild pitch or letting it drop from her mouth like she was in assisted living.  The dog was starting to get plump and our carpets were taking a beating.  In the last few weeks I learned to keep her over the kitchen tile when eating beets and I’m also going to invest in a drop-cloth from Home Depot, which might make my life easier.

During the off-times throughout the day, I did my best to avoid turning her into a carbovoire, but giving her Mum-Mum rice crackers and snack sticks were the cleanest options, or so I thought.  The problem with these things is that once they get mushed into her mouth, she smears them onto her toys and into the crevices of her blankets.  If I miss it during clean-up and it dries, it may as well be concrete, super-gluing the heads of dolls together like Siamese twins and forcing me to break out the hammer and chisel during nap-time.

Lately, Ava’s been eating more of our secondhand leftovers from restaurants and aside from the continued food shrapnel on the floor, it’s made the feeding process a little less tedious.  And let’s be honest, all that really matters is that she’s healthy.