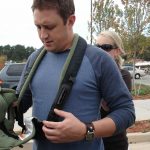 Last year we made a trip to Atlanta after Jen’s sister and husband had a set of twins, boy and girl.  Until that point, I had logged very few hours of baby experience and was eager (rookie mistake) to jump right in and help wherever I could.  Her sister suggested that I start off by carrying my niece, Addie, in the baby carrier.  I had not worn one of these before, but seriously, how hard could it be?  If Zach Galifianakis could make it look easy in ‘The Hangover’, I certainly could.  It appeared to be mostly legwork and since I lettered in track all through high school (let it go already), I didn’t see any trouble in this.  1970’s cop shows had led me to believe that I could just slide right into this bad boy like a .45 shoulder holster.  I could move freely and fire or holster my weapon (Addie) in the blink of an eye.  I was sadly mistaken.

In what looked like a human tornado, my body spun around the parking lot, almost as if my arms were chasing my body.  I was a whirling dervish of a seizure victim, my hands bound by a twisted strap while I continued to yank back and forth to free myself.  I was sweating and flustered, but determined to come out of this like David Copperfield, undoing myself from this homemade straitjacket. After a few minutes of the sideshow, Brooke stepped in and I was standing there looking like a tandem skydiving instructor in no time.  I only spent about an hour with this thing on and was already making calls for an adjustment at my chiropractor.

Almost a year later, Jen had given birth to Ava, and once again, I was face to face with my arch nemesis, the Baby Bjorn.  Even with my limited experience, I was able to comprehend the simple logic that is, if your kid is preoccupied by doing tandem errands with you, chances are, they aren’t crying.  This time around, I actually had a minute to sit down and read the instructions about how to wear this contraption properly.  I felt a little bit like Officer Alex Murphy after he gets shot, they revive him and turn him into Robocop.  I had some initial, clunky robotic movements, but smoothed it out and focused on targeting and maneuvering with my new limited frontal clearance.  I began to hone my skills and instead of basic trips to the mailbox or corner store, I graduated up to light housekeeping, grocery shopping and cooking dinner. 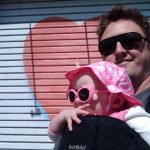 For the first few weeks, Ava was too young to start grabbing things or kicking her feet, so she essentially hung out contentedly on my chest.  It took a serious level of focus and was critical that I not bang her head off of the walls as I danced through the living room vacuuming.  I displayed a mastery level of knifework while prepping food and my ability to keep the bottoms of her feet from burning on the open oven door was unparalleled.  But I got cocky.

Like any good ride, at some point, it must come to an end.

On a normal day in early July, while the sun shone on the waves that crashed rhythmically on the Southern California beach, I loaded Ava into the Bjorn for a routine grocery run.  I grabbed a cart and we started moving through produce.  She had kicked the handle of the cart, firing it forward, nailing the tomato display and sending a dozen to the ground.  I squatted down awkwardly and picked them up while she laughed. Initially I thought it was just a fluke, but she managed to do it several more times.  Each time was equally embarrassing, as we banged into an old woman and also took down some hanging dry salamis.  I quickly realized that she had made significant advances in agility almost overnight. 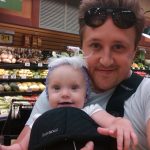 I soon became overpowered by her newly discovered talents, as soup cans tumbled in the aisles and my hair got pulled out in clumps.  I tried to hurry and get through the grocery list, but that became the next victim.  I turned it over to Ava in an effort to distract her from using her tentacles to break anything else I might have to pay for.  That just created another problem.

She then decided to obsessively flail her feet, kicking bypassers and throwing her heels into my vas deferens.  After slugging my way to the check-out, with my dented cans and bruised groin, the headbandit managed to put the icing on the cake by hitting ‘cash back’ with her little fingers of fury.  I got her outside and into her seat and took a 5-minute breather, sitting in the back of my car, beaten and busted up with $40.00 cash in my hand.  The best weapon in my arsenal may have it’s days numbered.

Bottom line, no antique stores for this guy.