Congratulations!  Summer is officially over and the kids are back in school and if you’re a stay-at-home parent like me, it’s time to go completely apeshit, right?

Long, quiet walks in the woods while listening to your headphones, endless hours of people-watching and sucking up Starbucks free wi-fi connection, leisurely drifting through the mall without a toddler dragging your pants to the floor… maybe even some naked Twister with a few of the neighborhood moms, right?

I’d be lying if I said I haven’t peppered in a few little things for myself… like listening to Jay-Z instead of The Fresh Beat Band while running errands or taking a few extra minutes to sit down and eat breakfast like a normal human-being instead of changing a shit diaper with half of a cream cheese bagel hanging out of my mouth, but the reality is that I’m still full-tilt with maintaining a household and cleaning up other peoples messes.

A lot of you may be lucky enough to have your kids in school all day, which is fantastic (seriously, I hate you), but for a good portion of us, it’s pre-school… only half-days, a few hours a week.

And that’s where I’m at. 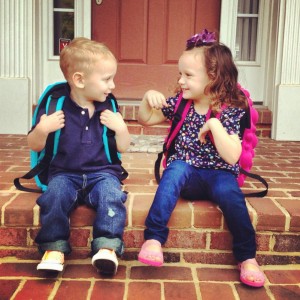 For a majority, football and cheerleading practices are heating up and there are tons of extracurricular activities and social events related to school.  There are sleepovers, movie nights, dances and parties (wait, does that still happen or am I completely dating myself?) and as your kids get older, it may be time to talk about the realities of underage drinking and drunk driving.

I probably blossomed later than a lot of kids my age and never really even tried booze until I was 17 or 18, but I know that times have changed and this is something that’s probably on their radar even earlier in adolescence.

Obviously, from the picture above, I have a few years to go until I need to start worrying, but I do think about it.

If I’m not careful, little Ava or Charlie might end up like this in 19 years…BACK AT SCHOOL. 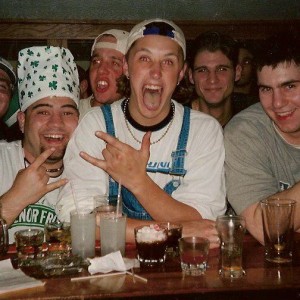 I’ve made some questionable choices.

This gem is from the photo archives on the night of my 21st birthday.

Obviously the elephant in the room is the fact that I’m wearing overalls in public, so we should discuss.  Look people, I grew up working on a farm as a kid AND I went to school in the sticks AND… didn’t Bell Biv Devoe bring these bad boys back into the 90’s zeitgeist or am I just making excuses?

You may also notice the tongue ring, long hair and earrings, but that’s neither here nor there, those are just a few of the ancillary bad decisions I made.

Getting back to my point… I may look like I’m having a great time in this picture but the reality is, that nifty cocktail in front of me with whipped cream and a cherry, was actually a collection of spilled liquor from the pour mats.  It was topped with Hellmann’s mayonnaise, designed to make me dispatch the previous 20+ shots I’d done into an industrial strength black trash bag immediately after this photo was taken.

There was nothing glamorous or cool about this moment.  I don’t find any pride in being carried out of the bar and down the street by four of my buddies, only to wake up the next morning with hot garbage breath and feeling like someone used my head as a temporary driving range.

Given, I was of legal age in this picture and able to make my own decisions, but there were other ‘less documented’ opportunities in the years leading up to this that make me think I’ve should’ve done otherwise.

A few weeks ago, I spent several hours at The Century Council’s headquarters in Virginia, listening to a gentleman by the name of Dr. Anthony Wolf.  Dr. Wolf is a practicing child psychologist and author of numerous books including the bestseller Get Out of My Life, but First Could You Drive Cheryl and I to the Mall, A Parents Guide to the New Teenager.  He also serves on the National Advisory Board for TCC.

He brought up several points of interest that made me think about how to approach or talk to my kids (in the coming years) about alcohol.

He reminded us that younger kids will generally say things with conviction, ‘that they’ll never drink’ and they absolutely believe in that.  In fact, I remember being one of those kids.

Developmentally, the brain changes around 12 or 13 years old and a lot times, the souls of those kids tend to fly out the window.  He recommended that we should start talking to our children as early as age 9. 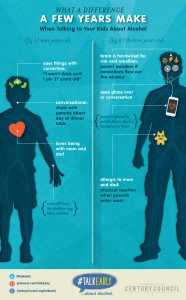 Does this kid look like he’s ready to have a ‘sit-down’ about binge drinking (or am I ready for the flood with my pants up that high)? 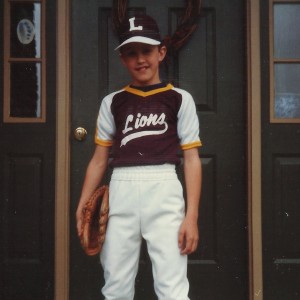 Not really, but I now understand how it makes sense.

This gives us the opportunity to supply them with as much knowledge as possible, so they’re prepared to deal with these issues when they’re finally old enough.

Dr. Wolf is also a fan of maintaining some humor through all of this, which transcends the day-to-day bickering, disarms pre-teens and still lets them know that we love them.  Personally, I’ve got the humor part covered.  My method will include the ‘shock and awe’ of these archived pictures along with a ‘DO YOU THINK THIS IS FUNNY?’ interrogation under a single, swinging light bulb.

It’s also important to remain spontaneous when talking about this stuff, a conversation that results from something relevant in your lives.  It should be short and swift and not a lecture, for which they will quickly tune out.  I know that I want to be genuine about answering their questions about drinking (why do people drink it if it tastes like shit?, etc.) and talk to them in an adult manner, not a ‘mommy or daddy’ voice.

With all my time off (aside from my hectic naked Twister schedule) while the kids are in school, I can’t help but watch the news and see these stories about drinking and sexual behavior in teens.  Underage drinking plays a significant role in increasing the chances of becoming a victim or perpetrator, as well as having unprotected sex that might lead to them doing things they wished they hadn’t  or might never have even normally done.

In this age of ever-expanding social media, there is less and less privacy and I only want to see my kids make educated decisions about their lives.  I want them to be comfortable in their own skin and confident in knowing that ‘fun’ doesn’t have to be defined by drinking.

If anything, they’ll see this picture of their grown dad in his OshKosh B’Gosh’s and think twice about drinking.

Have any of you had conversations with your kids about drinking and peer pressure?  Any successes?  Failures?  How do you handle it?

Please join our conversation by following @TalkEarly on Twitter – we want your input!