This past weekend, I found myself making the trek from DC to Atlanta for my twin niece & nephews 5th birthday, as well as a baby shower for my youngest sister-in-law.  Me, Jen, Ava, Charlie, Cooper (the dog) and my brother-in-law, Max, were all-in (the same car) for 1,270 miles, two La Quinta Suites, eight gas stations, a Cracker Barrel, Waffle House and Chick Fil-A.

Saturday was a lot of fun.  My brother-in-law and sister-in-law, Brad & Brooke set up a carnival in their backyard for the kids birthdays, complete with a primo bounce house, clown-mouth bean bags, dart games, sno-kones and balloons.

The city of Atlanta chipped in and brought some ball-sweltering heat, registering in the mid-90’s, illuminating the stage for the debut of my sweat glands.  I didn’t include any pictures, because all my iphone wanted to do was give me a heat warning and honestly, it was almost too hot to press that imaginary camera button.

Sunday was the ‘chicks only’ baby shower, which left me and the boy to fend for ourselves.  I didn’t complain (much), as we haven’t had a lot of time to bond as dudes.  I hooked up with Brad and my nephews and we took the sausage party to the movies.

Charlie is the greatest because he doesn’t have any opinions and can’t talk yet.  It didn’t matter if I was jamming to Alice in Chains or Carrie Underwood.  He just chilled in the backseat, refusing to give a shit.  He’s physically unable to judge me.  Sweet deal!

Turns out we weren’t the only geniuses on the block that decided to beat the heat with a cold pop and a movie.  CHAOS.  Kids with Thor hammers and Hulk hands tore through the lobby, slowing down our move to the self-serving germ kiosk to buy tickets.  I got there at 10:50 and the 11:40 was already sold out, so we decided to check out the mall and wait for the 1pm. I noticed that this mall had a LEGO store and since I’m a 36 year-old grown man with a Lego city in my garage, I felt compelled to check it out.  I chose not to consult the mall map or ask directions (sound familiar?) and start walking.

Twenty-five minutes and a mile later, we arrived at the other end of this disturbing labyrinth staring at a CLOSED sign.  Dejected, we turned around and headed back towards the theater.  On our campaign back through the bowels of the mall, Charlie and I began to feel a disturbance in the force.  We fell to our knees, debilitated, in front of a store called ‘perfect bodies’.

As we fought back the froth from the corners of our mouths and looked up from the fetal position, there it was. 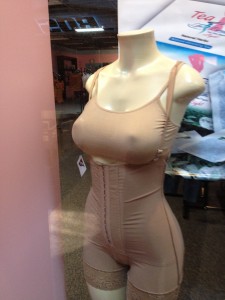 With Charlie still breastfeeding and me being me, our Achilles heel had been slit right then and there in the middle of the mall on the Sabbath.  I glanced at Charlie as we both twitched and writhed on the dirty floor tiles as if we were bitten by a Black Widow.

Charlie had his Hawkeye on the prize and wanted to command Thor’s hammer to smash that window down, channeling Tony Stark’s persuasive manner to release what he thought were dirigibles filled with milk.

“WE MUST KEEP MOVING CHARLIE”, I mumbled.  “We must fight.”  I struggled to contain my (Nick) Fury, to not Hulk out and do some avenging of our own.  How dare this mannequin challenge the fiber of our (loins) being.

EDITOR’S NOTE:  I don’t wanna sound like a whiny bitch, but is this an appropriate window display?  I mean, I know it’s (Captain) America, but c’mon.  When did they start putting nipples on mannequins?  And not to sound like a pig, but with a body like that, why is she hiding her face?

I fought tooth and nail to inch us away from the…………mannequin?

It’s a mannequin.  And we’re freaking out.  This plastic bust was controlling us like Loki’s spear. 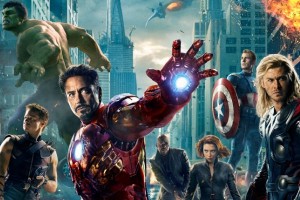 Charlie and I joined forces and summoned the power to move on and meet up with Brad, Max, Stone (our other Avengers) and 200 other dopes waiting in line to get admitted into the theater.

Charlie had already been in the mall for two hours, we were running low on food & drink and he was tormented by a headless mannequin with engorged torpedo breasts.  I rationed my ‘quack snacks’ and watered down the remaining milk.  Once we rolled in, the stadium seating threw me for a loop, so I grabbed a handicapped seat and docked him where the wheelchair would normally be.  I would’ve moved had anyone asked, but this was about (enjoying an awesome movie) survival.

I considered I might be pushing my luck, thinking he would sit through a 2½ hour movie after what we’d already been through. 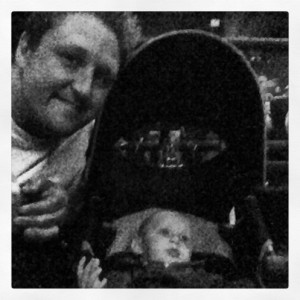 And maybe we didn’t fight an army of Loki’s soldiers that poured out of a tear in the time continuum onto the streets of New York.

And maybe we didn’t have flashy superhero outfits or special powers.

What we did have was an epic father & son day out, packed with action, food court gyros, boobs and his very first movie.

Think what you want, but WE were the REAL avengers that Sunday afternoon.