What am I talking about?

ONLY the greatest thing on Earth.  As American as it gets.  Apple pie, baseball and BOOBS.

As a man, I hold them in higher regard than water in the desert, the last 3 sheets of toilet paper on the roll or the World Series.  Men live and die for the nip slip, the sideboob, the down-the-shirt swingset or the lady next door chasing the mailman down the street without support.  We think about it constantly.  It’s a scientific fact.  We’re not rapid animals, but the froth at the corner of our mouths may give that impression.

The reality is that boobs aren’t just hood ornaments, they’re not just for Cinemax, Perfect 10 magazine, or flashing truckers on the interstate.  They don’t just keep the Hooters franchise afloat, or give Howard Stern something to talk about every morning.

They’re functional.  They help society.  They are a necessity.  Plus, they’re cool.

However, some dipshit at a Target in Webster, TX didn’t get the memo last week.

Last week, a woman flopped one out while shopping, to quell the screams of her hungry toddler.  A true soldier, an American hero, strafing through housewares nourishing a soldier in need.  The employee had her tossed out of the store.

There weren’t strobe lights or middle-aged man stiffies spilling whiskey on themselves.  She wasn’t wearing lace panties, clear heels and a boa, pacing up and down the runway headbutting crumpled dollar bills being fastballed from the sidelines.  She wasn’t conducting a burlesque show or suggestively rubbing a calculator on her genitals in the electronics aisle.

She was nursing her child.  A HEARTFELT obligation for the typical mom. 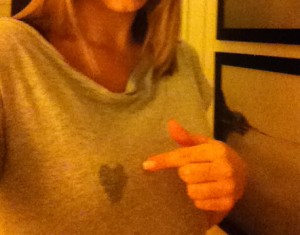 SIDENOTE:  You’ve seen people go on talk shows, telling their rendition of how they saw Elvis on a grilled cheese or pissed the face of Christ in the snow at Breckenridge.  My wife is going to kill me, as this was located in the ‘private’ folder of iphoto, but she lactated a heart.  A heart that seems appropriate for this blog, to show how much we support the art and act of breastfeeding.

Back to the story at hand.

This is a store.  This is a mom. That is a boob.  That is a kid attached to her boob.

How more natural can it get?

Was it really that distracting?  Most moms I know aren’t making this action a public event.  Meanwhile, I’ve got to shuffle through the store, looking at a bunch of wangstas with their pants sagging below their ass, a pair of stained Hanes ruining my shopping experience.

NO ONE DOES SHIT.

I guess this genius didn’t remember being part of the 90% society that grew big and strong feasting on an engorged bosom a few years back.

The bottom line is that boobs are glorious.  Breastfeeding is natural.  Scumbags, catch your glance, close up your trench coat and step to the side.

An image of breastfeeding should be stitched on the flag.  We’ll pick a cup size that makes everyone comfortable, stitch it next to the last state and fly it at full mast.

The Target corporate office has already issued an apology, but being an irrational hothead, who owns a hat like this, 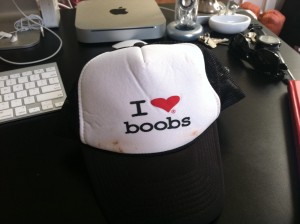 Go sit at home and hate your boobs.  Nurse-in!

PS – that isn’t blood on my boobs hat, I think my dog chewed one of those flavored bones next to it.