The storm that came through the Grand Canyon was on our ass like Jerry Sandusky.  Sorry, probably too soon on that one.  I continued to dork out, using my doppler app, further diminishing my sex appeal, as my wife stared vacantly out the passenger window.  Somewhere on the 89 South, we saw a gorge off the port side and some Navajo Indians (they were wearing Nike sneakers?) selling handmade jewelry.  Considering that my wife was approaching Dolly Parton status of engorgement, and Charlie was screaming like his balls were on fire, we decided to pull over.

These weathered entrepreneurs were obviously tuned into the ferocity of the approaching storm and were in the process of packing up their turquoise to avoid getting knocked down by a lightning strike.  Me?  I used this opportunity to take a picture of the Audi and our Thule, where we keep Aunt Edna.  I have no obligation to them, but maybe they’ll see this, start following me on twitter and pump some ad dollars into this bad boy. As the wind slammed the port-o-johnny door open and closed, and the apocalypse approached, everyone was running past my car for cover.  My wife smiled and waved as passers-by checked out the half-exposed breast that my son wasn’t able to fit into his mouth.  It started to rain and I high-tailed it back to the truckster. 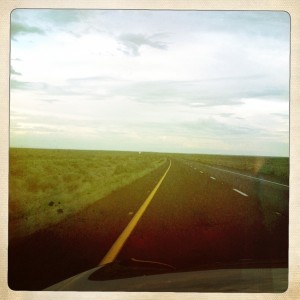 We raced ahead of the storm and drove South towards our next landmark.  The dreary weather had put my passengers to sleep.  Instead of getting all hot and bothered like Clark, as Christie Brinkley raced up next to me in a Ferrari, a shitty Nickelback song came on the local radio.  I had all the tools to get retrospective.  Precipitation, endless road, overcast skies and douchebag rock.  Looking at this picture after the fact, I’m hoping I wasn’t driving on the wrong side of the road. After an hour of cleaning out a Pringles sleeve and navigating through driving rain with a sleeping co-pilot, I woke up the troops by slamming on the brakes for no reason (my favorite) and scaring the shit out of them as we approached Sunset Crater National Monument.  As you may have guessed already, I needed to pull over and get my sticker of a volcano that erupted in the year 1100.  The picture below is the backside.  The other side is all black cinder, much less romantic. 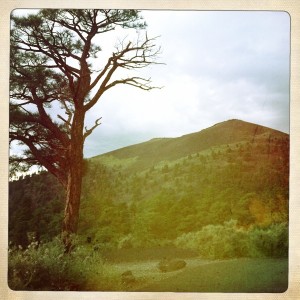 Jen didn’t appreciate me stopping short during her slumber and furthermore, didn’t like my attitude at the ranger station, because I didn’t swallow my pride and ask for directions around the monument.  We declared a truce on federal land and documented that I was wearing a collared shirt. 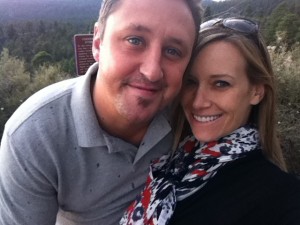 We got back on the 40 East and rolled on, just south of the Navajo reservation, through Winona and Two Guns (hometown of my biceps), Winslow and H0lbrook, headed towards our next destination, Petrified National Forest and Painted Desert.  I couldn’t resist pulling over at a local rock shop to see what the vibe was.  We decided to be responsible parents and stuff Charlie into a cracked stucco dinosaur egg with a baby T-rex.  Worked out great as you can see. 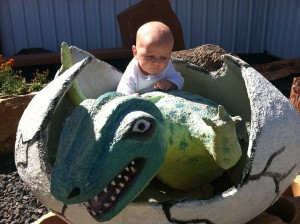 As we pulled into the parking lot, this sign caught my eye.  I wasn’t sure what a geode was, but at 80 cents a piece, you can guaran-damn-tee that I was buyin’ em’ up. 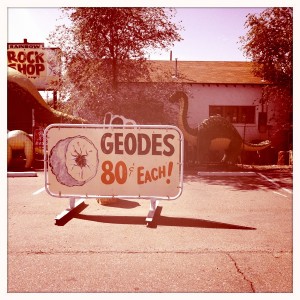 With a trunk full of rocks, we marched on to the Petrified Forest National Park.  I didn’t do much research on this landmark, but expected something cool and creepy out of an M. Night Shyamalan movie.  Maybe we’d see some cavemen or dinosaurs fossils embedded in wood.  Maybe even a unicorn or leprechaun frozen in time! 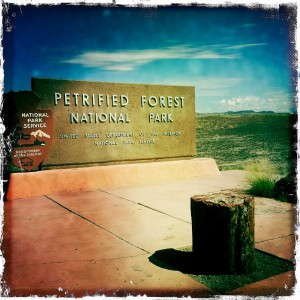 Big bummer alert.  The Petrified Forest is a bunch of old stumps that look like a crowd of cigarettes stamped out in the ashtray at a Denny’s.  I used my hipstamatic app to make it seem more fun than it really was.  Here I am showing off my ashy elbows, walking Cooper and Ava to the outlook.  Painted desert is across the basin. 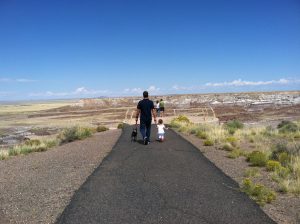 The desert was cooler than the dead wood.  I hate dead wood.  What’s not cool about stratified layers of easily erodible siltstone, mudstone and shale of the Triassic Chinle Formation?  Exactly. 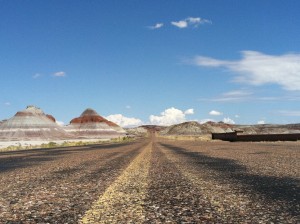 With two kids in the back, screaming, with siltstone of their own building up in the diapers, we pushed on to New Mexico to find a rest stop.