As we approached Arizona, I had already exhausted every decent song on my iPod.  My door was jammed up with an array of gas station jerky and Dr. Peppers.  My wife didn’t think Metallica was helping Charlie fall asleep and I couldn’t deal with the ‘Wicked’ soundtrack one more time.  We agreed on the Phil Collins Greatest Hits album, which was cool for a few minutes, then not.  We reminisced with ‘Another Day in Paradise’ and may have even bounced in our seats a little during ‘Two Hearts’, but I would never openly admit that to anyone.  ‘I Wish it Would Rain Down’ gave me some junior goosebumps and it wasn’t long before I got emotional, and there I was, headed out to sea in a Phil Collins flat spin.  My excitement and fervor for Phil had turned into hatred, rage and depression.

“Sussudio’ came on and it was only a miracle that I didn’t gut myself with a buck knife before I saw the Arizona sign.  Getting pictures of all these state signs is great if you want to nearly wreck your car every time, cutting over four lanes and stopping on a dime while going 85 mph. 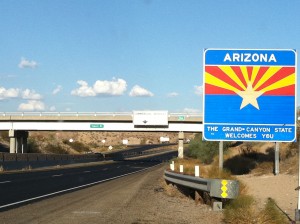 We were a little over halfway to meeting our goal for the first day.  Four hundred fifty miles and then we’d spend the night in Williams, AZ. 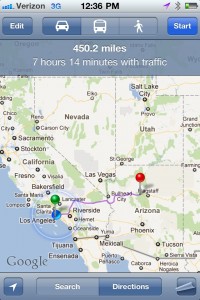 Seven hours and fourteen minutes isn’t that accurate if you’re stopping off every five minutes to do a ‘kid to boob’ hook up and change one of my daughter’s truck driver shits.  Her road trip diet of Doritos, Dairy Queen and prunes had turned downright deadly.  I’ve never smelled anything remotely this bad.  It was almost as if someone was burning turds wrapped in hair in my backseat. 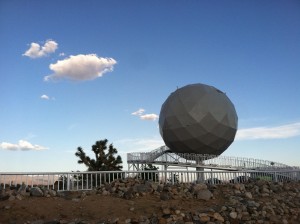 After hitting a rest stop to regroup (decontaminate), we loaded everyone back in, pulled out onto the highway, only to realize that a mile ahead was something cool that I needed to stop for.  This Geodesic Dome is outside of Kingman, AZ.  They were in the process of doing the sensible thing, turning it into a gift shop.  It was under construction, but had a trailer next door, where they sold beer and jerky.  They also offered some outdated audio cassettes for your travels and the rest of the trailer was decorated with aliens in formaldehyde, your average, run of the mill roadside stuff. 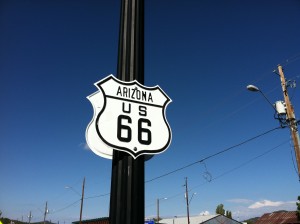 We took Route 66 into Williams, AZ and checked into our hotel, The Grand Canyon Railway.  Conveniently located minutes from main street, it’s a dog-friendly hotel.  Normally the dog stays with you in a room, but these guys took it to the next level.  The dogs actually had their own hotel adjacent to ours, with individual rooms. 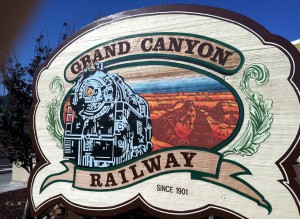 The only problem with our dog hotel is that you’ve got to be there by 8pm, which we weren’t.  We got there past the cut-off, so, after driving for like 10 hours, we had to write a bad comedy script on how to sneak a dog into a hotel undetected.  I volunteered to check in and sniffed around for the best side door access.  We covered the dog in a sheet like E.T. and shuffled him through the parking lot.  EDITOR’S NOTE:  This totally worked, everything in motion pictures is real! 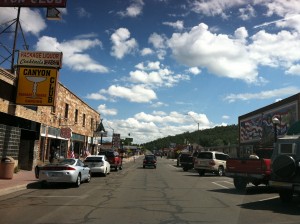 The next morning, we ventured onto to Main street in Williams.  It was a picturesque scene, oozing with the smell of Americana.  It was the beginning of September, but felt like the 4th of July.  Bikers with old ladies on the back, RV’s and pick-up trucks loaded with dirt bikes.  We had breakfast and oogled some pies at the Pine Country restaurant.  If you’re looking for a long booth, they have the longest.  After my country biscuits n’ gravy, I lied down on mine like it was a stretcher and waited to be loaded onto the ambulance for my lap-band surgery. 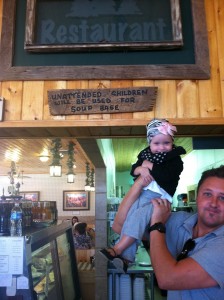 After an hour of Ava throwing jelly packs at our neighbors, I tried to give her away to the kitchen staff, you know, for the soup.  They passed. 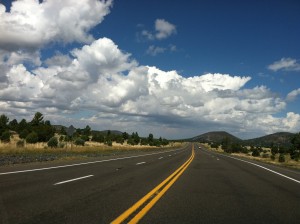 Main street went from nostalgic to cheesy in less than an hour and it wasn’t too long before we got onto the 64 north towards the Grand Canyon.  I had to stop at the ‘Planes of Fame’, which is basically an airplane graveyard for retired Navy and Air Force jets, as well as one of the Blue Angels.  I wanted to spike some volleyballs, hop on my crotch-rocket and go Maverick to the canyon, but alas, I had screaming kids and a bored wife waiting in the truckster. 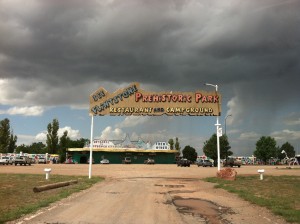 A few hundred yards up the road, the weather changed and we entered the twilight zone.  The sky was bright blue with yellow undertones, peppered with layers of thunder and lightning.  Rainspouts were whipping across the parking lot.  Where was I?  What was happening?  I felt like Woody Harrelson tripping on acid in ‘Natural Born Killers’. 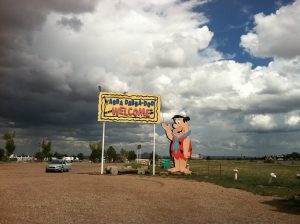 Before the heavens unloaded, I jumped out and snapped a few shots.  Apparently, this was a theme motel and bar, packed with local stone-age alcoholics.  From what I could tell, this place was shady, but amazing.  Welcome to Bedrock!