Last week we went to meet some friends for brunch.  For those who are unaware, brunch is a fake meal in between breakfast and lunch, most likely made up years ago by parents who wanted to get the hell out of the house in between toddler naps.  Our friends have a beautiful daughter a few months younger than Ava and it’s nice to get together, compare notes and reassure each other that no one has gone completely bat-shit nuts yet. 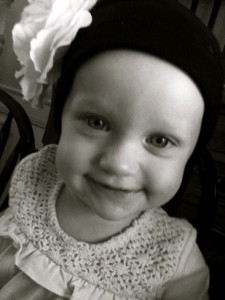 In these situations, since everyone at the table is working except for me, I feel like I really need to shine.  I drive through the parking structure, staring straight ahead, thinking about how I’m going to bring my A-game.  I’ll talk about how I am trying to teach Ava how to swim, learn her ABC’s and 123’s and say ‘please’ and ‘thank you’.  I act like Superman, unaffected, when it comes to talk of teething tantrums and growing pains.  As far as they are concerned, it all bounces off of my emotional armor and in turn, makes the whole table feel like I’ve totally got my shit together.

Forty minutes after we ordered, the food finally arrived.  (EDITOR’S NOTE: 40 minutes in a restaurant with 2 toddlers and no food is like being forced to sit through a bad movie.) I thought we were in the clear until my wife’s ‘extra side’ of hollandaise came out like it was stored in an igloo.  It wasn’t a surprise to me, but Jen ignited on our waitress like a pack of black cats stuffed in someone’s mailbox on Independence Day.  We all sat there, uncomfortably, fake talking to our kids until the exchange was over.  Thank the heavens I had my shit in order* (remembering the parking ticket for validation, carrying bags into the restaurant, being nice) because evidently, this was a day that could easily turn men into mice.

The manager came over and took care of the bill for the table and I figured that our day had been turned around.  We calmed down, ate our meals and chatted.

Everything was cool until Jen needed to dig through MY diaper bag for something.  At home, SHE has two beautiful Coach bags, green and pink.  They both have matching changing pads, golden clasps for the shoulder hitch and a stuffy 90210 demeanor.  My bag was given to me as a gift by some friends.  It’s green camo and full of testosterone.  Forget about the fact that I have to wear it over my shoulder like a European messenger bag, this thing was manly.  However, it doesn’t receive the same TLC that her bags may get.

THIS IS THE ONE THING I HAD NOT THOUGHT ABOUT. The Kryptonite inside of my bag was about to melt my whole Superman persona.

I knew this was going to be a disaster.  As she fished through it, I fidgeted around, trying to think of excuses for everything she was going to find.  Like every parent, I sometimes neglect cleaning out my diaper bag.  I pile stuff on top of other stuff with a hoarding mentality.  My man-purse was a geologist’s dream.  Sedimentary layers of toys, perishables and dirty diapers. 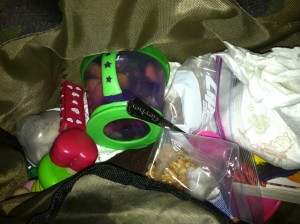 This brunch had turned on me.  As my wife burrowed through my museum of trash and showcased it on the table, I cringed in embarrassment in front of our friends.  I mean, how bad could it be?  So long as she didn’t pull any dead hookers or coke out of my bag, I was safe, right?  She excavated this thing like some sort of forensic analyst.  First. it was diapers that were 2 sizes too small, from 3 months ago.  Then, it was the ‘missing’ airflow bottle filled with, once milk, but now, curdled cottage cheese.  As she got through the layers of my personal disgust, she pulled out this little cutie. 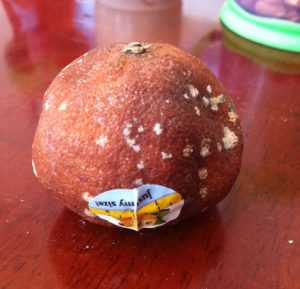 Everyone at the table got a hearty laugh as Jen asked me what it was.  I was now sweating, feeling like it was the Daily Double and I needed to answer for the win.  It looked like a shrunken voodoo head that Shamans use to cast spells on people.  I sat dumbfounded, smelling and squishing it.  What is, a petrified tangerine from the end of March?  CORRECT!  Now cut to commercial Trebek… 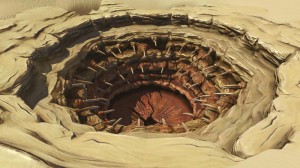 I don’t care who you are, the diaper bag sometimes gets neglected.  For me, this bag is the Sarlacc from ‘Return of the Jedi’.  It rests on my shoulder, waiting to take someone’s hand off if it goes in.  It is a multi-tentacled, alien beast whose immense, gaping mouth is lined with several rows of sharp teeth and swallows anything I drop in there.  It’s a 24-hour garbage disposal for Jabba the Hut and my parental/toddler amenities.  It’s like the trunk of my wife’s car.  She puts shit in there and forgets about it until the lease is up.

The good times rolled on as we pulled out vintage rattles from 09′, a spare outfit from the 3-6 month category (she’s 18 months old) and the Chex Mix shrapnel and broken Cheerios that covered the bottom.  Everyone had a hearty laugh at my expense, which really set my ‘I’m a great stay-at-home Dad’ campaign back by several years.

Oh well.  I guess the moral of the story is that, if you happen to see me walking down the street, keep your arms and legs inside the vehicle at all times, unless you want to donate them to my European Pit of Carkoon.