After stuffing myself with hash-brown casserole and cheese grits for almost two weeks in Atlanta, we headed back to the airport to fly north, to Philadelphia, to see my parents and one of my brothers. Once again, we caught a lucky break and Ava slept like a mummy in her sling during the entire flight.  At least until the landing.  It was safe to say that we didn’t have ‘Sully’ Sullenberger at the helm on this one.  The last 30 minutes of the flight felt like a bombing run in a B-17, while taking flak from the Germans.

As we entered the final descent, it was almost as if the pilot had turned the stick over to a 4th grader.  We were in a martini shaker with 130 other people, our asses being lifted up and down from the seats.  Instead of ‘easing her in’ on the landing, as soon as we hit the tarmac, the Anti-Sully decided to slam on the brakes like we were about to crash into the mall or something.  It was a relief to put my sneakers on the ground and I couldn’t believe that Ava slept through that mess.

Stepping off of the plane was an even larger buzzkill.  There was snow on the ground and the wind chill factor put it well below zero.  I didn’t want Ava to be outside for more than a few seconds or she’d freeze up like carbonite Han Solo, so we had my Dad pull up to the door for a quick hand-off to get her in the car.  It took about an hour to get to my parents house and even though Ava probably won’t remember, it was her first time seeing snow.  It was also her first time on the Pennsylvania Turnpike, which probably wasn’t nearly as exciting. That night, we got Ava ready to go to her first bar, the Spinnerstown Hotel.  I wasn’t blessed with the ability to dress a girl, so Jen usually picks out most of the outfits.  After her bath, I’m usually on drying detail and making sure she doesn’t roll off of the bed.  In this particular instance, I’m really just hoping that she isn’t shitting in her robe.

Most of the bars where I grew up are old stone hotels that have been converted into both a bar and restaurant.  The hotel was packed with holiday revelers and we decided to forego the bar area and class it up in the restaurant section, as the drunk roofers in the bar probably weren’t going to put out their Marlboro Reds for my kid.  I was reunited with two of my old friends, Yuengling Lager and church pierogies.  Both were easy on the eyes, but not so much on the midriff.  The ride home proved to be a little dicey and it was my first time driving on black ice with precious cargo on board.  White knuckled Aunt Polly!

As we pulled up the driveway, I experienced a Norman Rockwell moment with snow hanging on the boughs of the trees and candles in each of the windows.  Ava slept in her Pack ‘n Play in front of my Dad’s ‘birdwatching’ window as the wood stove crackled in the background.  We had beers in frosted mugs and watched the end of  ‘Christmas Vacation’.  The holidays just wouldn’t be the same without Cousin Eddie telling me that the shitter was full.  So maybe it was part Norman Rockwell, part Al Bundy, but it was great. 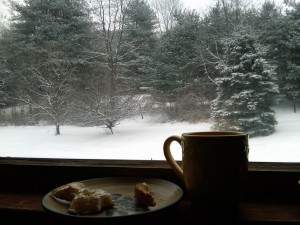 It snowed again overnight and we decided to let my Mom and Dad have some fun with the baby while we ate breakfast in bed.  After eating, we watched my Dad snow-blow the driveway and chop up some firewood, then got Ava ready to meet her Uncle Eric for the first time.

Holding a baby can be seriously nerve-wracking, especially if it’s not yours.  Eric was always good at tucking a football into his arm, so I went with that analogy when offering her up for the first time.    After a few minutes of initial awkwardness, the color came back into his face and I think he realized how amazing the situation was.  That afternoon, we got the chance to introduce Ava to her Great-Grandparents, which was also very cool.  Not everyone gets to sit in the same room with 4 generations of family.  She may not remember it, but we certainly will.

After living out of suitcases for the better part of December, we packed up the circus and headed back to California.  Things were about to get interesting.