My memories of the pediatrician are few, but the ones that I do have are very distinct.  Whether it was a yearly check-up, immunizations or a sick visit, my Mom (a nurse) was, by default, better equipped than my Dad to accompany us to the doctor.  Plus, like a lot of us, my Dad’s kryptonite was screaming, germ-ridden kids, so there was that.  Since this was Ava’s two month check-up and essentially her first visit, we decided to go together.

Aside from the fact that we had to valet (90210) our car, the overall pediatrician experience hasn’t changed much since I was a kid.  You would think that a pediatrician’s office in Beverly Hills would look like the Ritz.  Guess again, they’re all the same.  You’ve got your ‘well’ entrance on the left, ‘sick’ entrance on the right, and hand sanitizer everywhere in between.

As we entered her office for the first time, I almost goofed and went in the ‘sick’ door by mistake.  I was THIS close to putting my bare hand on a doorknob that was probably dirtier than a college kid’s comforter.  A few centimeters was all that separated me from fecal matter and pink-eye spores.  I stopped, and like a sweat-ridden bomb technician, moved ever so slowly to the ‘well’ entrance on the left and turned the knob, allowing the door to open and the dam to break.  I was hit by a flood of childhood memories gushing straight at me. 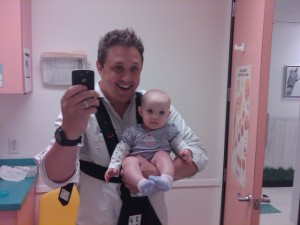 It was all there.  The fish tank, complete with a few tropical stragglers, the chalkboard with one or two stubs of chalk that hadn’t been eaten yet and stuffed animals that looked like they fell out of a pick-up truck on the freeway.  There was also the sign-in clipboard and a 2-seat bench for 10 patients.

Since we had an infant, we were called back to the examination room pretty quickly and I was confident that Jen and I were on the same page about our visit.  Let’s get this done and get out of here before one of us gets strep throat.

The nurse came in to discuss the vaccine schedule and we moved quickly from certainty to uncertainty.  One of the main reasons we chose our pediatrician, aside from being connected to our hospital, was that she was comfortable with an alternative vaccination schedule.  There are enough stories out there about the negative effects of giving so many vaccines at one time, to consider the alternative. Some of the vaccines are oral (no biggie), but a few are injections to the arm or leg.  We fought like Dan & Roseanne over who was going to hold her while the shots were administered and having the nurse standing right there while we argued, amplified the awkwardness.  I got nominated for the job and even though the vote resulted in split decision, somehow I lost.  Neither parent ever wants to be the bad guy, but it was time to roll up my sleeves and get dirty.

I stared into her eyes and muttered things like ‘It’s okay’ and ‘ssshhh, you’ll be fine’, which were total lies.  The shot(s) only took a millisecond, but the pain caused Ava to let out a huge delayed scream.  The nurse applied the traditional nude circle band-aids and I tried to avoid Ava’s field of vision.  She looked at me like I was a complete asshole until Mom swooped in and saved the day by putting a giant boob in her mouth.  Even though it’s all about nutrition and nourishment, being a baby isn’t a bad gig.  I don’t know about you, but I’d love to have a boob in my mouth every time I blow an interview or fall off my bike.  The world would be a much happier place.