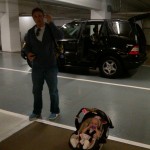 This past April, we found ourselves going back to the pediatrician for Ava’s six-month check-up.  Despite having to pay the valet $18 to drive our car recklessly through the parking structure, we were feeling positive about her progress and optimistic about the results we were going to hear.

We took the elevator up to the sixth floor and I hugged the opposite side of the hallway as we moved past the ‘sick’ entrance.  My unnatural fear of germs was amplified thanks to watching ‘Yo Gabba Gabba’.  I’ve now associated them with little scurvy cartoon characters wearing sour faces and can see them dancing around on the doorknob waiting to leap into my ear, nose or throat.  I used the collar of my shirt to shield myself and met my wife inside, who had already signed in and was waiting to fly into full paparazzi mode, snapping flashbulbs like we were on the red carpet at the Oscars. As we got entered the examination room, the Doctor informed us that Ava was in a low percentile for weight, but a high percentile for height.  I answered a series of questions about her motor skills, daily activities and diet.  The Doc seemed less than amused when I told her I was feeding her crushed cigarettes and watered down bottles of screwdrivers for lunch.  Oddly enough, the eighth grade humor didn’t translate to the medical profession.  She commented on how large Ava’s hands and feet were and combined with how lengthy she was, we could expect her to be fairly tall.

Towards the end of the exam, Doc wrapped the plastic tape measure around Ava’s head, at which point, I noticed that she looked a little perplexed.  She told us that Ava’s head was growing at an alarming rate and that we should monitor this situation over the next three months and see what happens in July.  She tried to downplay her level of concern, but as Jen and I got into the elevator, she chose the glass half empty route, while I (for once) went half full.  She sped down ‘brain tumor avenue’, while I contended that Ava was a future member of Mensa. 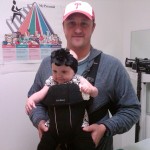 Before we knew it, three months had come and gone and we were back for our nine-month evaluation.  The height and weight percentiles had evened out a bit, but she was still petite for her age and they suggested increasing her ‘solids intake’ to get her beefed up.  I joked about deep-fried twinkies and cooled bacon grease squares for snacks and once again, I caught the doctoral stink-eye.  At this point, Jen had enough of my comedy routine and belted out, “BUT WHAT ABOUT HER HEAD?”  The truth was, we had been running scenarios at home for weeks and the suspense was intolerable.  The measurement indicated increased head growth.  Jen and I looked at each other nervously, waiting for some sort of explanation and how we might move forward. 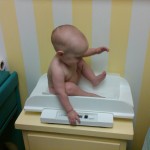 The Doc measured Jen first and came to the conclusion that she, in fact, had an abnormally large coconut, falling into the 75th percentile of human heads.  I laughed hysterically and made a crack about the fact that I had married a Bobblehead.  As it turns out, the joke was on me.  As she wrapped the tape around my head, her eyes lit up like she had just solved the puzzle on ‘Wheel of Fortune’.  She clanked away on her laptop, referencing medical tables and as luck would have it, she informed me that I had a massive, bulbous watermelon of a head on my body, qualifying well over the 100th percentile. 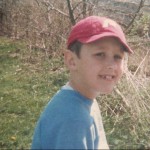 You would think at some point throughout my childhood, I would’ve fallen down a lot or noticed myself having trouble wearing fitted baseball caps, but no.  There was absolutely no indication that I had a pumpkin for a head.  I went into sulk-mode and took it in stride as Jenny danced around the room laughing, but ultimately I was relieved that Ava wasn’t in any danger, she was just a by-product of her dad, ‘the freak’. 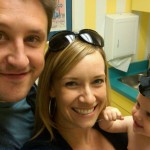 That night, ‘Paparazzi Jenny’ emailed more pictures to our families, excited that our little girl was healthy and maturing.  Being a nurse, my Mom likes to call me after every visit and ‘talk shop’, commenting on Ava’s percentiles and using outdated medical jargon that I don’t necessarily understand.  She was taken aback by the size of her hands, feet and overall length and made the trigger-happy prediction that Ava would someday play softball or field hockey.  I laughed because my Mom had picked her for all of the stereotypical lesbian sports (and there’s nothing wrong with that!), but Jen and I were thinking more along the lines of a pianist, ballerina or model.

At the end of the day, the world is her oyster and maybe one day, you’ll see her standing next to Alex Trebek, winning Jeopardy with her giant Bobblehead.  I love you Ava.  Share those winnings!