Halloween has always been one of my favorite holidays. It was pretty simple when I was a kid. Me and my brothers loved coming up with original costume ideas and always got Mom’s help to put them into action. If we were really lucky, we went to the Sines 5 & 10 or maybe even Woolworth’s and were lucky enough to get half of a costume… like the year that I went as Batman. The blue girl’s stockings and brown Isotoners came at the expense of my mom’s bedroom closet, but oh well, it worked… at the very least, it kept me warm.

There were several years that we just got too busy and ran around at the last minute rummaging through our linen closet, cutting holes in my mom’s surplus of bedsheets. Towards our teens, we got to the bottom of that barrel and were actually using the fitted sheets. Ever seen a pack of ghosts wearing fitted sheets? We looked like jackasses!

And the pillowcases didn’t go to waste either – they were recruited as our candy bags. We were quite the sight, me and my three brothers walking around the neighborhood in enough linen for a small hotel chain. And then there was the year that I went as a rapper (my Tone Loc/2 Live Crew phase) and my brother, Eric, went as Freddy Krueger and taped ham lunchmeat to his face. We can just forget about that…

Things have changed a little bit, thirty years later. With the rise of social media, it’s not just the neighborhood families that are judging your outfits – it’s your entire social network and then some. And if it’s your kids that are on display, you can’t let them down. This year, I’m using Straight Talk (nationwide messaging with 5gb high speed transfer*) to get these incredible moments to my family in a jiff.

Even at two weeks old, Ava had her first costume.

And the following year she was able to hold her own head up, so we strapped on some cute wings with a matching hat and showed her off at any fall festival that we could find.

And then Charlie came along. He got the short end of the stick because mom was so busy working on Ava’s costume, that dad got to pick his.

And why not be the guy that also dressed his dog up to parade around the neighborhood with Charlie the gas bag and Ava the lobster? 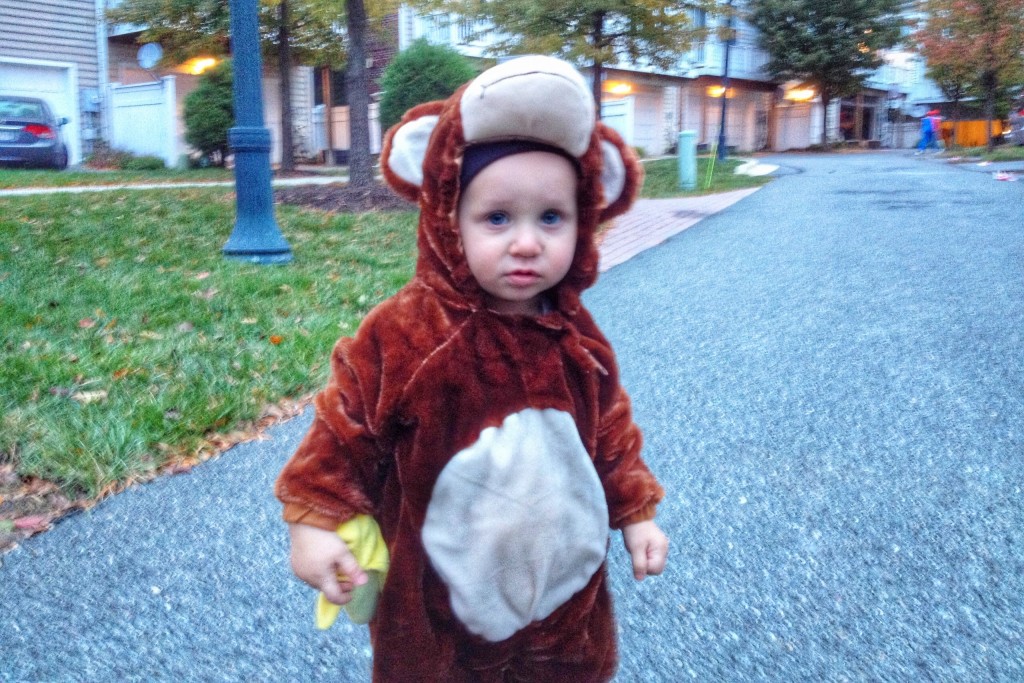 But with age… comes responsibility and a bigger imagination. 2013 came along and Ava couldn’t make a decision on what she wanted to be, so her version of my childhood bed sheet ghost was the owl costume – two years in a row. Charlie, however, had BIG plans to be a ninja turtle, his favorite TV show, so we got to work. Handmade turtle suit and head care of my wife’s grandmother circa 1990 – check. Eye and face paint – check.

On the heels of Ava’s frustration with wearing the same costume two years in a row, I snapped into action. I’ve never been any type of visionary or artist – and I’ve tried. In my 20’s, I once spent $200 on a ton of acrylic paints and canvas when I lived in an artist loft in downtown Los Angeles, thinking I might change the world.

Let’s just say that my work isn’t on display at The Getty.

I pleaded with my wife a few years ago to buy me a guitar as a Christmas gift. Haven’t strummed a chord, however it’s on ‘my list of things to do’.

What I’m trying to say is that, this could’ve gone horribly wrong. But, it was for my kids (and me, selfishly), so it would get my full attention. I’ve kept a dark secret over the past few years. I’m a Lego fanatic and in turn, my kids have become Lego fanatics. So…

I honestly didn’t reference Pinterest or Google this at all – I went at it inside my own head. I used old cardboard boxes from our move and cut holes by hand that would perfectly fit 3/4 of a solo cup and pushed them forward from inside. Then I lined them up for spray-painting.

I had the kids help me (to a certain extent, until Charlie said the spray paint smelled nice) and for a homemade costume, it turned our pretty darn good. In a way, I was reliving my childhood, helping my kids with their (my) idea to parade around town.

I even made one for Jen, myself and Mason. The time spent working on this together felt good.

I guess I don’t know where I come out on this ever-evolving adventure.

Life is cyclical and our holiday traditions follow suit (almost literally). But along the way, I realized that change is good.

Why take the easy way out? Just because someone (or some thing or service) is in your face with a fancy commercial or advertisement or amazing packaging doesn’t mean that we shouldn’t be open to different ideas.

The mobile plan that I used to share these images above – is a case in point.

Most of the pictures above were shared between me and my previous network for a hefty fee, each month. This year, I’ve beaten the system. I’ve taken the initiative and researched different wireless plans, including Straight Talk Wireless.

The money saved in October is the money that’s being used to fund this.

We all bought nude unitards and are going as the Treasure Trolls, a line of troll dolls that emerged in 1959 and have been an on and off trend every since.

My point is not to show off my #dadbod but to admit that change is good. Straight Talk Wireless has cut our mobile bills in half every month – we pay for what we use OR in our case, take advantage of the $45 unlimited monthly package, along with that 5gb high speed messaging*.

Do your research. Save some cash. I’m telling you that it might make your holiday season a lot more fun.

And for the record, this is actually called a “Eurotard” (I couldn’t make that one up) and it was sent directly back to Amazon. Newer, better troll suits and wigs to follow…

EDITOR’S NOTE: As one of the Straight Talk Testers, this blog is sponsored, however the story, the pictures of me and my family and my clenched unitard buttocks AND my opinions are all my own.

DISCLAIMER: *Includes unlimited talk, text and data with the first 5 GB of data at high speed per 30 day cycle. After 5 GB, data speed will be reduced to as low as 2G for the remainder of the 30 day cycle. At 2G speed, the functionality of some data applications such as streaming video or audio may be affected. All currently active Straight Talk BYOP customers will also receive the first 5 GB Data at High Speeds at the start of their next 30 day cycle. Please refer always to the Terms and Conditions of Service at StraightTalk.com.