So.  Here we are in the first week of December.  I’m sorry, but WASN’T IT JUST JUNE?

As I’ve probably mentioned, last year I sold a book to Penguin Publishing based on this very blog.  I had a year to write it, but just like cleaning the garage and wiping down the bases of the toilets, I procrastinated.  I keep making ‘lists’ (compulsive list maker) about it’s content instead of actually sitting down in front of the computer to write the damn thing.  Anyway, June comes around and I’m looking at the calendar, which says September 19:  FIRST DRAFT DUE.

I don’t know about you and your journalistic prowess, but writing a book in four months while being the primary caretaker for two toddlers (10 hours a day) and maintaining a household is basically impossible.  So that’s where I’ve been all this time.  Playing daddy, chef, maintenance man, landscaper, chauffeur and laundry boy, while being an author every night from 10pm – 2am and sleeping for 4 hours.  Shampoo, rinse, repeat.

The good news is that I’m close to the end of the revision process and it’s due out on the shelves in May, just before Father’s Day.  Not that I need to tell you (because you’re smart), but it would probably be an cool gift for moms and dads alike, those expecting, knee-deep or retired from the trenches of parenting.

I’ll let you off the hook on that for now, because there’s bound to be much more to come.  In the meantime, it feels good to get back to blogging…

Thanksgiving in Philly with my parents was great and so were the six months before it.  Trust me, we’ll talk all about it.  I’ve got about forty stories teed up in the cue, so go take a tinkle, relax, kick back and enjoy the (my) ride.

As a married couple, it’s been our tradition to decorate the house for Christmas while we’re still eating leftover open-faced turkey sandwiches.  Ava is now 3-years old and Charlie is 16 months.  Together, they wake up every morning and jump into the ring (our bed) like the ‘Hart Foundation’ of the WWF.  Ava is Bret ‘The Hitman’ Hart with her curly slicked back locks and Charlie is undoubtedly Jim ‘The Anvil’ Neidhart, always up for a good morning headbutt.  Ava leg-drops my midsection while Charlie bites my wife’s nipples (revolting against weening) all while flinging each other off the top ropes, sending them careening throughout the house, threatening the dog while wielding their oak KidKraft chairs.

Normally this isn’t a big deal.  Just a day in the life.  I’ve (literally) got a security gate blocking off every level and room of the house and the cabinets and cupboards have long since been baby-proofed.  But Christmas adds a new number to my dance routine.

I remember mine and Jen’s first Christmas holiday together after we got married.  All of our decorations were neatly combined, wrapped in brand new white tissue paper and stored away in immaculate condition.  It was a picture perfect Hallmark image of matching ornament sets and twinkling strands of lights.  It smelled like evergreen and carols played in the background while we started a fire and sipped hot cocoa.

THAT is just the needle dragging across the Nat King Cole Christmas album, bringing everything to a screeching halt.

Today, this is our tree. 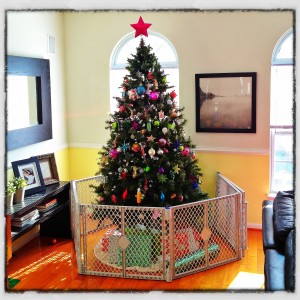 Nothing really matches anymore and half of the ornaments are now wrapped in toilet paper.  We have three of these, five of those and a handful of singles that we can’t stand to part with.  We ditched the live tree for an artificial version which is less of a mess.  While my kids are picky eaters, I’d put any amount of money on the fact that they’d be inclined to eat a mouthful of pine needles if I wasn’t looking.

As illustrated above, the upper two-thirds of our tree now holds most of the delicate ornaments, with the less-appreciated, third stringers coming off the bench to hang low towards the bottom.  The step stool is buried somewhere in that ‘garage’ we talked about earlier and aside from me jumping off the sofa to slam-dunk that star on the top, we missed decorating most of the top branches.  The collapsible gate around the perimeter offers a relaxing…’penitentiary feel’ that we just can’t get enough of.

And the lights.  Oooh, the lights.  I remember spending an hour or two last year sifting through these knotted bird’s nests using the ‘guess and check’ system and realizing that most of them didn’t work.  Instead of throwing them out, in true hoarder fashion, I kept them, thinking that I’d be able to steal a few from one strand to make another one work. I’ve never considered myself a slipper kind of guy.  I’ll be honest, my feet have the potential to stink when locked up for hours at a time within the confines of a matching pair of puffy beer cans or bunny rabbits.  But now, I can’t leave the bedroom without them.  It’s less of a comfort and more of a necessity, in the event that I inadvertently walk across a field of broken ornament shards while going through the living room. 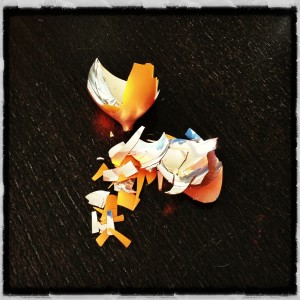 Those timeless carols are now Dora’s Christmas Special (again and again and again), there’s no more wood crackling in the fireplace and the waft of evergreen has now been replaced by a dirty diaper lazily tossed into the kitchen trash can instead of the Diaper Genie.  We often forget about our cups of cocoa on top of the fridge, where they join the ranks of every random sharp, dangerous or valued item we don’t want the kids to have. 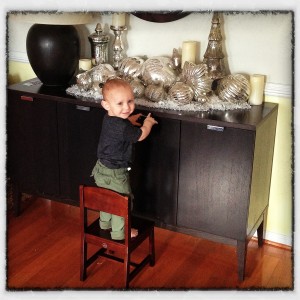 And even when you think you’ve got something out of their reach, they surprise you yet again with their innovation, pulling fake snow and hundreds of metal snowflakes onto the floor.

I’m no longer just a stay-at-home dad with a hundred side-jobs, because that would just be too easy.  I’m also the official defender of the Christmas decor. 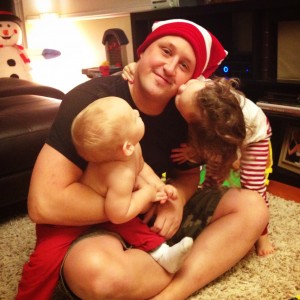 I’m not angry or bitter about what Christmas has become.  The magic and joy of the season is still there, I just have to dig a little deeper and battle the elements to get to them.

The truth is, I hope my kids love this holiday as much as I did as a child…and still do.