In ‘classic’ form, I misjudged my packing time by, like two weeks.  ‘Operation: I toldja’ so’ was going exactly how my wife had expected.  However, in my defense, I didn’t think we had this much shit.  Once the metal door came rolling up on our storage unit, at first glance, you might think that I just had a bulldozer push trash into it.

With Charlie being born and Ava going mobile, I didn’t exactly have Saturday afternoons to kick around Public Storage and organize our collection of extra ironing boards and separated pairs of women’s shoes.  We had a few matching plastic bins that served as the foundation, but the rest of it was a menagerie of trash looking to give way at any moment.  Roller blades (not mine), ziploc pillows of old phone chargers, ripped t-shirts from college and a half dozen retired DirecTV receivers that I thought I might need somewhere down the line. 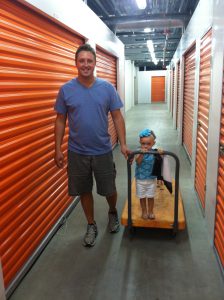 A good general rule of thumb is to never take a toddler with you to unpack your storage unit.  If it’s not written down yet, then it should be. This one should be in the ORIGINAL dad playbook. Sure, I look like a hundred smiles for the family photo album here, but at it’s purest, was like watching the Keystone Cops compete on the ‘The Amazing Race’.  The part that I didn’t document is where I went and rented a 14′-foot trailer to move everything to headquarters, our 28′ foot-trailer.  Multiple trailers, cash transactions, dealing with guys who didn’t have sleeves on their t-shirts, felt like I was doing something illegal.

There are numerous ailments and injuries, both physical and mental, that accompany moving yourself across the country. The one that probably had the greatest effect on me, mentally, was this.

Packing tape. This tape was included in a moving kit that I had purchased online.  I was the proud owner of 4 defective rolls. 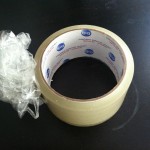 I’m not sure who exactly is running the show over at this tape company, and I’m sorry if it’s your dad or uncle or whatever, but this tape is the biggest piece of shit I have ever seen.  If you had anything to do with the manufacturing of this tape, you should be ashamed and embarrassed.  You should stay in bed today.  Don’t even get up to go in.  You’d be doing me a bigger favor laying there than actually going in to the office to make this crap.  I’m sending you an invoice for forcing me to get in the car and go buy real tape that actually works, like Scotch (holla – call me!), plus gas, meals and mileage. 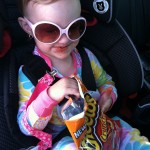 I didn’t want to admit it to my wife, although already brutally obvious, that this move wasn’t going to be ‘good exercise’ for anyone.  I fought through the tears of anger over shitty packing tape and went to the store for more.

That’s when I heard this one in the back. I must’ve had some form of anxiety blackout, because the way she’s dressed makes me think I threw her into the car like we were running from a tornado.  Sure, it’s mid-afternoon. Those are her pajamas.  Is she eating straight from a bag of Cheetos with orange cheese pollen painted across her face?  Yes.  Yes to all of it. So what if that’s lunch today?

After the tape situation got ironed out, things started to go smoother.  I had my youngest brother, Travis, working around the clock with me.  His standard work outfit was basketball shorts, Air Jordans and a white tank-top.  Someone should tell him that he isn’t Woody Harrelson in ‘White Men Can’t Jump’.  We were making real headway, which was good since the dude taking the trailer away was coming later in the day.  As it turns out, we have almost 2,000 cubic feet of worthless treasure.

The trailer was picked up and we sat on the barren floor, realizing that we had committed ourselves to driving across the nation and living out of our car for the next week.  Our last night, with everything gone and literally nothing to do, we sat around by candlelight and thought about how our forefathers had lived and….lol, no we didn’t.  We ate sushi and shot this commercial for an air mattress.  Two adults, two kids and a dog.  No punctures, no leaks, mildly uncomfortable with farting noises when you move, but it got us through the night. Our worldly goods were no longer in our possession, we had paid a bunch of guys we had never met to take everything we own and drive it around for a few thousand miles on the interstate. 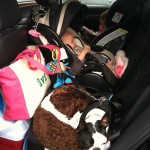 We followed behind at our own pace in the family truckster, planning a few stops here and there along the way.  2,700 miles.

We made it all the way to the first Chick-Fil-A (40 minutes) before we had already stopped for an original chicken sammie and nuggets and a breastfeeding (Charlie, not me, unfortunately).  With everyone fueled up, we did another few hundred miles until we hit the last gas station before the Mojave.  Five bucks a gallon and 108 degrees.  The air was so thick you could almost see the AC trying to fight through the fog of pistachio burps and dog farts. 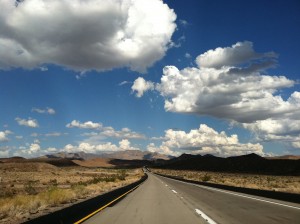 We were, however, underway.