Two Sundays ago, evidence of my vas deferens marching forward like the dominant players of Invictus, made themselves apparent.  While I wasn’t dismantling apartheid or bringing millions of joyous people splashing into the streets, my swimmers were, once again, undefeated and unconquered in their efforts against my wife’s uterus.

Charlie Maxwell Kulp was born during a full moon on Sunday morning, July 17, 2011 at 6:36am.  Without rugby shorts, a striped polo or taped-back ears, he weighed in at 7 pounds, 12 ounces.  He was 19.5 inches long and once again, I was there to cut the cord.  The first time was tough enough, but this one got sweaty.

It was my own personal Hurt Locker.

My first son. I couldn’t foul this up.  It was all up to me now. 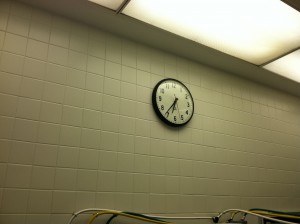 …doctors holding clamps to my left and right, breathing stale lattes down my neck.  Cords, tubes and a flailing newborn weiner, I stood in the middle holding a pair of medical shears.  Beads of sweat ran down my face.  WHO IN THE HELL HANDED ME THESE? CUT THE RIGHT CORD BROTHER, is what the voices were saying. 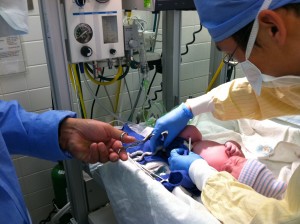 With the pressure on, I went Matt Damon on that umbilical.  The hospital insurance carriers rejoiced and people huddled around their tv sets watching on CNN at home did the ‘Toyota jump’ in their living rooms.  I sat back on my swivel chair with a proud smile, the only reaction I was capable of, as I struggled to regain my composure and not black out. 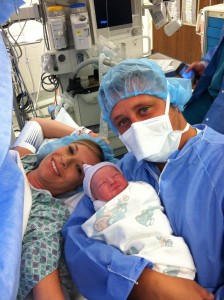 Here we are serving lunch in our hairnets immediately after the birth with Charlie.  We figured we would start giving back to the community almost immediately. 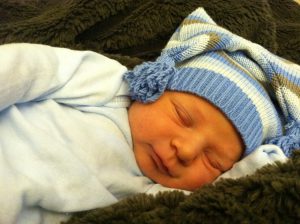 This is the young lad resting peacefully a few hours after birth.  I’m so fortunate to be a father again.  Welcome to the world, Charlie, I can’t wait to show you all the cool stuff.