October is birthday time around these parts.  First, my wife, then my daughter.  It’s a double wallet crusher that somehow always catches me off-guard, sprinting around town collecting gift receipts the day before.  This was the first birthday with Ava involved, so it put a decent amount of pressure on the big guy (me).  My wife and I dated for five years and have been married for two.

So collectively, I’ve been waiting seven years for an excuse to save some cash and bust out a homemade birthday card.  As an adult male with a good job, it’s a tough sell to present your chick with a card made from crayons and washable children’s markers.  It usually screams ‘I forgot the most important day of your year’ and/or ‘sleep on the sofa you dumb ass’.

I encouraged my wife to go out spend some relaxing time by herself (mega giveaway) and as the front door slammed shut, I sprang into action.  Thankfully, I had already purchased our (mine and Ava’s) legitimate gift the day before.  While Jen was at work, I took Ava to the Container Store , which is normal for me, constantly buying bins to store retired shrunken and stained infant clothing.  As it happens, Tiffany & Co. is in the same outdoor mall and you can never really go wrong with jewelry.

The security guard at the door (Big Carl) helps me babysit while I peruse the viewing cases, strutting around like I have money falling out of my pockets, acting like I might actually buy something totally fancy.  I went the sentimental route and nabbed a chain with two sterling silver hearts, representing myself and child, already jealous of the precious metal knowing they would spend their life dangling between my wife’s knockers.

The missing link was the card.  This is where I got creative. 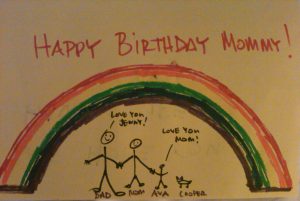 Through the years, I’ve realized that my strengths are english and history, with my deficiencies lying within the worlds of math, science and art.  Everything I’ve ever drawn looks like i did it blindfolded with my opposite hand in the backseat of a car during a high-speed chase. Even though this isn’t Hallmark quality, it does scream ‘handmade’, which worked in scoring some points with the old lady.

After several attempts, paint on my t-shirt and in, around and on Ava’s face, I realized I needed another strategy. I tried to restrain her from the waist down in her high-chair, giving me the freedom of both hands to uncurl her fingers and get a solid print.  The first few sets looked like a beaver with a club foot, maybe even a porcupine since I hadn’t clipped her nails in a week or two. 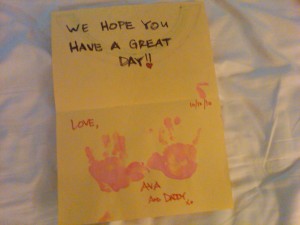 Eventually we ended up with this.  I figured it was good enough to pass for a human and needed to wrap it up so I could clean up the disaster we had created before my wife got home from work.  Sometimes the best gifts are from the heart.