Several weeks ago, Jen and I had our 20 week appointment, a 4d ultrasound.  We knew that we would be able to determine the sex of the baby at this appointment.  Jen suggested that we keep the gender a secret and have the doctor write the sex on a card and seal it inside of an envelope.  Then, we would give that envelope to our bakery down the street and have them prepare a cake covered in white fondant, the inside of the cake being either blue or pink.

After that, we would have a friends and family over to the house for a ‘gender reveal’ party, not to be confused with a ‘baby sex’ party for obvious reasons.  We would cut the cake and find out, together, what we were having.  I assumed this was something she saw on ‘The View’ or ‘The Duggars’, since I’ve never heard of it.  You’ve got to pick and choose your battles in marriage and I was comfortable hiding behind a rock, waving the white flag on this one.

One thing that I didn’t see coming was the preparation and insanity that ensued.  Pregnant women, while glowing and always beautiful, are like a grenade with a loose pin.  You really need to exercise caution when dealing with them.  Fortunately (cue sarcasm) for me, I came down with a mammoth head and chest cold the night before the cake-cutting.  I hobbled around our place deliriously, on both ‘quils’ (day and night) the morning of the event, touching up dings in the walls with a paintbrush, hiding all of our accumulated junk in the corners of closets, steam cleaning the rugs and trying to make the best possible presentation to our guests.  HOW DARE our friends know that we occasionally get overwhelmed with laundry and cleaning.  THE HORROR. 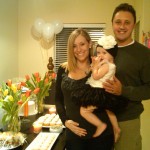 So.  The people gathered, they gorged on unique cheeses from Trader Joe’s , drank two-buck chuck and mingled.  We posed for pictures (don’t mind Ava doing the double finger up the nose move) and were having fun.  Around nine o’ clock, I noticed a friend gnawling on a cheese rind in the corner, struggling to keep his eyes open.  I forgot it was a ‘work night’ and it was also nearing midnight on the east coast.  We needed to cut the cake.  Jens parents and one of her sisters were in town and we tied the rest of our families in by phone to reveal the news.

I always thought that I would have all girls.  I figured it was kharma getting back at me for being a gigolo in college.  Quite honestly, I never really thought about the sex of the baby up until this point, health was my only concern.  As everyone gathered around, it struck me that they were here to help us celebrate a monumental intimate moment and I needed to snap out of my Zycam fog. 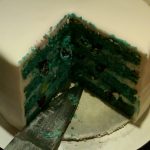 I made the first cut and as I pulled the knife out, we all noticed a blue twinge.  At that moment, I was truly caught off-guard.

I was gonna have a little buddy.  Just like me, but if all went well, maybe better.

While I’ll always love and treat all of my children equally, I can’t help but think that a mother has different advice to offer their daughters than fathers do their sons.

As I lay awake mulling over this great news, I started to think about having a little sidekick.  Sure, mom could protect and help Ava, but it was my responsibility to help this young man navigate life waters. 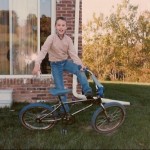 I’ll be able to teach him how to piss on the toilet seat at other peoples houses.  How to pick and roll boogies, make mudpies and pull girls hair.  How to play pirates, build forts and make jumps for his bmx bike.  We’ll catch crayfish, learn how to tie a hook and go fishing.  I’ll teach him how to eat with dirty hands, not be the last kid picked for the kickball team and dominate the playground by putting chicks in the ‘jungle gym jail’. 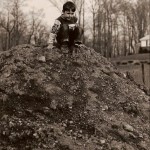 I’ll take him for his first haircut, teach him to respect his elders and avoid shitting his pants at school.  Maybe he’ll throw a perfect spiral and be a die-hard Phillies fan.  I can throw him tips on avoiding swamp ass, sharing with others and not getting poison ivy on his dong.  I’ll show him how to bandage a wound, make an emergency tourniquet and throw a devastating curveball.

It will get more complicated as he gets older.  I’ll advise him to avoid the laser background in his school picture.  How to find his voice and figure out who he is as a teenager.  We’ll work on the art of unhooking a bra in the dark, the definition of a ‘feelski’ and managing the unsightly public erection.  He might have to get braces, succeed at the ‘middle school mall’ and learn how to get out of a fight with one punch.  I will be his Yoda.

Towards the end of junior high and into high school, he’ll rebel.  I’ll have to step up my game and offer him valuable information to stay ‘cool’ in his eyes.  I’ll dial him in on siphoning gas and stealing beer from open garages in the summertime.  He’ll need to know the rules of co-ed skinny-dipping, building character and always offering to pay the bill when on a date. 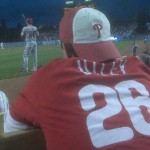 He needs to know to hold doors open for women and seniors, act courteous, look presentable and use deodorant/cologne so he doesn’t smell like a hobo.  I can fill him in on motorboatin’ and disguising purchased condoms under a bag of pretzels at the check-out line. 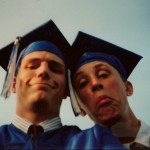 One day, he might call me from college with an STD scare.  Sorry son, you’re on your own.  I’ve given you the tools to succeed and you’ll always be in my heart.  Good luck, I love you.

When all is said and done,