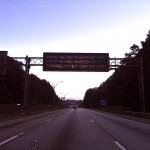 The humidity in Atlanta kicked my ass like Chuck Norris.  I moved like a dying salted slug from baggage claim to curbside pick-up.  I loaded the Royal Family’s luggage into the car and hopped into the backseat for a ride to the hospital.  Crunched between the car seat and door, I turtleheaded up through the middle to catch some conversation and a hit of secondhand air conditioning before my ass cheeks melted into the seat.  We made a mandatory ‘sweet tea’ stop at Chik-Fil-A and eventually arrived at the hospital where Jen’s sister, Brooke, was admitted.

As I walked down the long, white sterile hallways, I had a touch of deja vu.  I passed a few noobs (new Dads) shuffling through the halls in ratty robes and slippers with giant bags under their eyes and it made me appreciate the fact that I was only there to visit.  I mumbled ‘sucka’ under my breath and laughed to myself.  I knew where they were. I was blown away by how big Brooke’s room was compared to Cedars-Sinai.  You could fit 25 people in this thing.  I could do a PX-90 workout or twirl around like I was in a meadow in a douche commercial and never knock over a flower arrangement.  I was half surprised there was even a sofa, yet there it was, a sweet siren song in the late afternoon, reeling me in to elevate my feet. 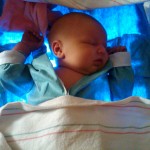 This was Brooke’s second rodeo and I think she was tired of being held captive by the hospital walls.  We caught her on the last day of recovery and she was ready to charge the gate.  I truly forgot how little newborns are and Liv was absolutely beautiful.  I kept asking Ava if she remembered any of the things in the hospital, like the nursery or the infant bassinet.  I even shoved her in there for a nostalgic ride down memory lane, but I don’t think any of it registered. 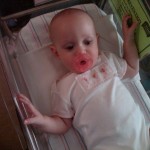 If there was one thing I remembered about our hospital stay, it was our nurses telling us to bring everything home that we could fit in the car.  Gauze, diapers, blankets, mittens, hats, diaper cream, suckers and even some fishnet undies for Mom.  Get your $45,000 worth.  We raided the place and took everything that wasn’t nailed down.  Brad (Brooke’s husband and Cardinals fan, OUCH!) loaded Liv into their car and we watched them drive off for their first night at home together as an expanded family.  By the time we left it was 10:30pm and aside from some purse crackers, none of us had eaten dinner.  Ava was still awake and hungry, so we addressed the ultimate decision. 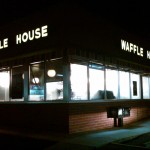 If you’ve ever been to Atlanta, you’ll know that aside from a church on every corner, on the opposite side of the street is a Waffle House.  Breakfast for dinner.  CLASSIC.  Because there are probably a thousand WH’s in town, the clientele is spread thin and we had ours all to ourselves.  I had never been to a WH and was about to get a crash course in how to order my hash browns.  I could get them “scattered” (spread on the grill), “smothered” (onions), “covered” (cheese), “chunked” (diced ham), “diced” (diced tomatoes), “peppered” (jalapeño peppers), “capped” (mushrooms), “topped” (chili) and “all the way” (all available toppings).  I went ‘smothered and covered’ rather than ‘all the way’ because I didn’t want to have to wear a diaper in public all week.  Wikipedia says that recently, the option of “country’ has also been added for taters with sausage gravy.  WE. MUST. GET. FATTER.

After eating double and triple orders, the Atlanta Fire Department used the jaws of life to free us from the table and EMT’s wheeled our bloated bodies to the car on stretchers.  After traveling through the night the day before and spending the day at the hospital, we were void of energy and cheated Ava out of a bath.  I Farley’d our bed without brushing my teeth.  We woke up 8 hours later, still smothered and covered and I felt like I should do the fatty walk of shame somewhere in the neighborhood.

We stuck around for another day or two and visited with Ava’s new cousin and the rest of the family.  It’s tough to be 2,000 miles away from them, but it makes these little moments that much more important.  Welcome to the world Liv, we love you!