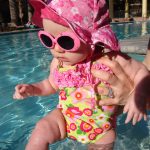 This past April, Jen suggested that we introduce Ava to the swimming pool.  I paused to digest the information and then shot her a look as if someone had removed her brain from her head while she was sleeping.  Could you even do that?  This kid is only six months old.  Won’t the chlorine in the water slough the skin off her bones like hydrochloric acid?  Then what?  Child services would be here in like ten minutes.  I could already see it.  An aerial shot from the Channel 9 chopper at the top of the 6 o’clock news, with tanned pool-goers surrounding Ava, who now looked like Two-Face from ‘Batman’, with one of her eye sockets melted off and exposed.  As they lead my sulking body away in handcuffs, Ava shoots me a look (with her good eye) that tells me when she’s in her twenties and I’m finally out of prison, she’ll be back to seek retribution. 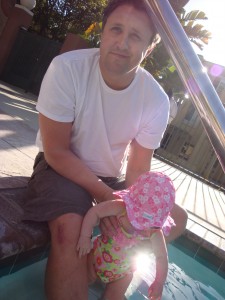 Jen reeled me in and explained that it’s never too early to introduce a baby to the pool and reminded me that Ava had floated in water for nine months.  I tried to argue with the logic, but it eventually won me over.

At this point, my wife’s focus had shifted to her attire.  As a dude, I’ve swam in cut-off jean shorts (commence laughter), boxers and even gone commando when the situation deemed it necessary.  I’ve swam in ponds, rivers, lakes and oceans.  It was never a huge production.  Take off your shirt and dive in.  There were no accessories or entourage of gear.  Now I found myself bogged down with sunhats, water slippers and pink duck towels.  Half of the time my wife has her dressed like Elton John in one of his performance outfits, about to take the stage.  I guess I should just shut my mouth and be glad she’s not in a bikini yet.

As we got ready to go down to the pool, I had serious concerns about reliving the extraordinary cinematic moment from ‘Caddyshack’ when that kid released his bowels into the water, everyone yelling ‘DOODY’ and maintenance coming down to drain and disinfect an Olympic-sized swimming pool.  I wanted to avoid any sharting incidents and luckily Jen was already one step ahead of me.  My ‘MUCH better half’ had purchased special waterproof diapers that would contain any such leakage, keeping our dignity in tact and saving us from a potential PR nightmare. 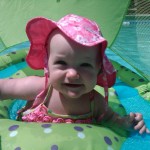 We got Ava into the water and swam around for awhile until I moved her into what was essentially a high-chair for the water.  There were a few things that she could chew on and the mesh netting kept her afloat while I amused her with my novice backstroke and freestyle swimming moves that used to impress the ladies in Junior High.

She got bored after about ten minutes of this and Jen hopped in the pool to show me a trick she had been doing with her in the tub at home.  I was curious what it might be and swim backwards a few feet to get the full experience.  She grabbed Ava, blew air in her face and then dunked her underwater.  I felt the laser beams on our necks coming from everyone’s eyes around the pool.  I could almost see swimmers diving for their cell phones to dial 911 and hear the rotors of the ‘breaking news’ chopper creeping up over the hill, into our neighborhood.

Once again I looked at Jen like she had recently escaped a psychiatric hospital.  I sunk halfway into the water and whispered to her that our neighbors probably thought you’d had enough and were trying to drown the poor child.  She reluctantly told me I was paranoid and as we plucked her from the water, we did a 360-degree pirouette for good measure, pretend laughing and acting out a faux Norman Rockwell moment to calm the masses.

Ava initially hacked up some water and her face crinkled like she just ate rotten cauliflower, but for the most part, she seemed to actually enjoy it.

This was one of many ‘first experiences’ that have frightened the shit out of me, but for now, I know I’m better off, sitting back and relishing in the fact that my daughter is still wearing a one-piece.