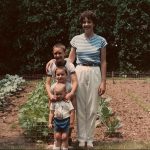 When I was a kid, on Saturday mornings, while my Dad did yard work, my Mom would go grocery shopping and my brothers and I would stay behind to make pancakes, watch ‘Super Friends’ and annihilate the house.  We built bed sheet forts in the living room that made their way through the kitchen and into the den.  We suspended the sheets from the tops of end tables and planters, the TV and even the wood stove.  We weighed down the corners with antique lamps and telephone books and constructed corridors underneath with sofa cushions and pillows.  The expansive linen-roofed estate had a back entrance that led up the stairs to our bedrooms.  This was our main supply route to get plastic guns and swords distributed throughout the fort, so we could battle the shit out of each other.

It was only a matter of time before we could hear Mom’s station wagon pulling up the driveway with an accompaniment of car doors opening and closing.  She struggled up the path towards the front door, her arms clutching a slew of grocery bags.  She was definitely wondering why we weren’t out there to help.  The front door flew open and unbeknownst to her, it clipped the corner of our main sheet and triggered a total domino effect fort demolition.

Three rooms of connected sheets collapsed on our heads, leaving a few pint-size ghostly protrusions sticking up in different rooms, yelling back and forth, trying to determine which asshole destroyed hours of our hard work.  As we fought our way to daylight, Mom set the bags down on the kitchen table, turned to us, sitting amidst the entire emptied linen closet, broken lampshades and an armament of plastic weapons and simply said:

MOM: “There are more bags in the car.  And you’re are out of your minds if you think I’m cleaning this up.  Who do I look like, Hazel the Maid?” 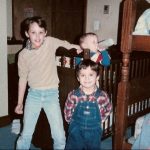 As we hauled the remaining grocery bags up the front lawn, my brothers asked me who Hazel was and why Mom was constantly overusing the reference.  I didn’t have the answers.

Years later in college, with the help of syndication and drinking beer into the early mornings, I came to realize whom she was referring to all those years.  Hazel was the star of a television sitcom in the 60’s, a competent, take charge, live-in maid.  She toasted marshmallows with the Baxters in their living room and baked homemade cookies while hustling around in a classic maid outfit complete with feather duster.

My generation had Tony Danza making it look like a snap, flexing a tricep workout while vacuuming the curtains, in between flipping pancakes and boxing in the garage.  He dressed the kids and got them ready for bed in time to have a glass of wine with Mona in front of the fireplace.

Sitcom history has made me believe that being a maid or a housekeeper is a pretty swank job.

As a stay-at-home Dad, part of my duties probably fall within that territory.  I cook, clean and manage a household much like these stereotypical archetypes that preceded me… but I feel like maybe they missed a few important episodes. 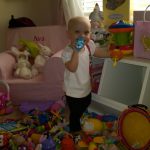 Which episode showcased either of them catching a heel on some dog shit and power-sliding their forehead into the car while buckling a car seat? Or the back spasms from bending down every five minutes to pick up a princess doll?

How about the one where the large Coke gets pulled down onto their lap at dinner? I don’t recall ever seeing Hazel combing dried formula out of her hair or soaking pieces of the breast pump in a tub of vinegar on a Friday night.  And did Tony ever have to take an ’emergency’ piss in a public bathroom with his daughter’s feet dangling in a Baby Bjorn threatening to interfere with his stream?  I don’t think I caught that episode. And we can’t forget about the first season finale when they had to quell with explosive diarrhea that escaped from a diaper in the middle of a packed Anaheim convention center.  Or realizing after a near mental breakdown, that it’s almost impossible to fold onesies and you should’ve been balling them up from the start. Remember the one where 500 cheerios spilled out at the eye doctor?  Me neither.  The endless hours spent correcting people about whether or not it’s a boy or a girl?  And that time that Angela asked Tony to return a shit-covered Diaper Genie to Babies ‘R Us, just because, ‘they take everything back’?  Didn’t think so.

Maybe it’s about time for someone to show us the BAD and the UGLY.