The days of eating out of vending machines and recycling underwear were over.  No longer would I have to touch my rear to a foreign toilet seat, watch sports in standard-definition, or remember the names of 30 rotating nurses.  We were back on home turf.  After we carried Ava into the house, I spent some time lugging flowers and gifts inside. Most normal people will keep baby gifts around for awhile to enjoy them and then they either utilize the gift, put it on a shelf or if it’s perishable, toss it in the garbage.  This wouldn’t be the case with my wife. We received a few edible cookie bouquets during our stay which sat around the hospital room, leering at me like a shady drug dealer, whispering my name in the dark alley of the night.  I was under strict orders not to eat these ‘just yet’.  What I didn’t realize was that by ‘just yet’, she meant ‘never’.  I assumed that once I got these into my kitchen at home, I would used my fingers like a chainsaw to obliterate the decorative plastic and devour these things like I was trying to win a contest.  She had strung me along in the worst way, like a senior dating a naive freshmen, taking advantage of my emotions towards food.  Months went by and at least once a week, I would ask if we could finally throw these out, watching in horror as they moved beyond their ‘best by’ date and moved into the ‘no longer edible’ category.  They had been admired, enjoyed and photographed but my concern was that we were hoarding rock hard discolored cookie arrangements.  It took 8 months.  I’ll never know what they may have tasted like and to lay them to rest was difficult, but these are the times that try men’s souls.

It was great to be back in our element at home, but it was lacking a certain luxury that we used to have.  As much as I complained about the nurses coming into our room every 15 minutes, they were always there to give recommendations, offer advice and even take the baby to the nursery so we could sleep.  The tandem rides were done.  No more training wheels.  This was game on and it was up to us to keep this kid alive.  We had a stack of baby books, but most of them were so painfully boring, that to read these for leisure would be painful.  So in moving forward, the only real knowledge I had was from a Jenny McCarthy childbirth book and babysitting my cousins once or twice as a teenager. So it was settled.  I would rely on Jenny McCarthy to raise my daughter.

We got into a routine in the hospital and carried it over once we got home, which seemed to work out.  I’ll admit that I took a backseat approach to parenting during the first 2 months and if you’re really good and keep reading what I’m writing, I’ll explain how it came back to bite me a little later. My wife was bonding with her daughter and so long as she was comfortable being so involved with everything, then so was I. 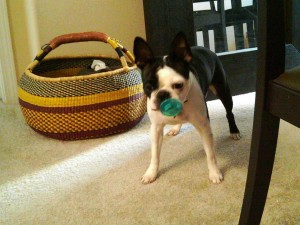 The other issue we had to deal with was introducing our dog, Cooper, to the baby.  He’s never bitten anyone and has an inherently curious demeanor, so we weren’t that concerned.  He would sooner lick something for an hour than bite on it. Nevertheless, you never know how a dog is going to act once his/her territory is infringed on.  The biggest problem we encountered was that every damn kids toy looks like a dog toy.  With a little reinforcement, he started to understand that not everything with stuffing inside of it was his.  Instead, Cooper went for the jugular… the life force behind babies not crying: the pacifier.  Our first stand-off resulted in me chasing him under the dining room table and scalping my upper forehead in the process.  I revised my battle plan with Cooper and decided that reverse psychology might work best.  If I act like I don’t care that he stole a pacifier, he becomes bored and discards it.

The 2 weeks that I had taken off work at the end of October went by way too quickly and it was time to go back.  Out of all the pre-delivery advice I’d received from other parents, the piece that always bothered me the most was ‘get your sleep now’.  I had heard it so many times it became unbearable. I daydreamed about sucker-punching these parents in the stomach.  They may as well have said they had slept with my sister.  It was inspiring a quiet mental rage and had I grown up with any sisters, I certainly would’ve gone berzerk on them.  However, the night before I had to go back to work, all I could think about was ‘get your sleep now’. I know what they meant, but honestly, it doesn’t make any sense.  It’s not like we can bank sleep for later use.  At the time, I considered that they might really be offering up some heartfelt advice, but now I know that it was nothing more than a taunting kick in the balls.  They knew what was coming.  Sick bastards.