Up until earlier this month, I’m pretty sure that I’d only ever been through Arizona once, which was during our cross-country drive (with a 2-year old, 8-week old and dog), so it was tough to actually stop for a minute and take in it’s full beauty. So in February, when Corning Incorporated reached out to me to see if I’d be interested joining them for a Corning® Gorilla® Glass 4 boot camp to have some fun and learn more about their brand at the Ventana Resort in the desert outside of Tucson, I took one for the team and obliged. 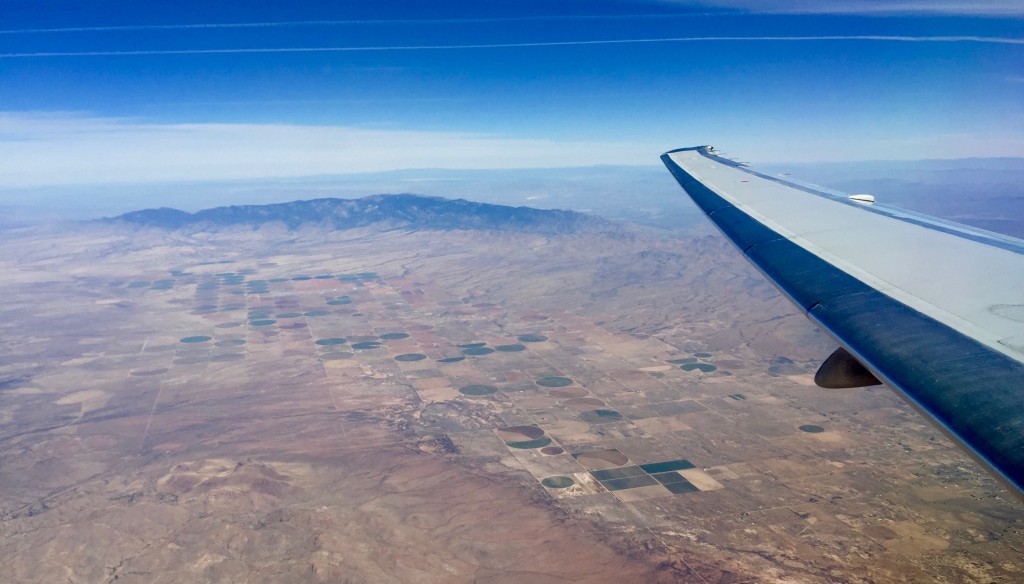 Our initial descent into Tucson.

After waking up in Maryland to an inch of snow, flying from Reagan to Dallas and eventually circling and landing in Tucson, it was an arid and balmy 80-something degrees. From the airport, it was about a 40 minute drive. I had already met up with two other bloggers, Beth Santos of She’s Wanderful and Jimmy Luong of Jim’s Review Room, and we shared a car, talking about our varying backgrounds. Corning reached out to over 20 bloggers, all from various parts of the country and world, working in a multitude of mediums to converge on the Sonoran desert. We’d not only endure the harsh toughness of the rocks, cacti and rugged terrain, but also educate ourselves about a brand that shares similar qualities.

Upon arrival, we had some free time to take in the backyard scenery of the Ventana, situated in the foothills of the Catalina mountain range, complete with an 80-foot naturally occurring waterfall and plethora of mammoth Saguaro cactus and blooming desert flora. 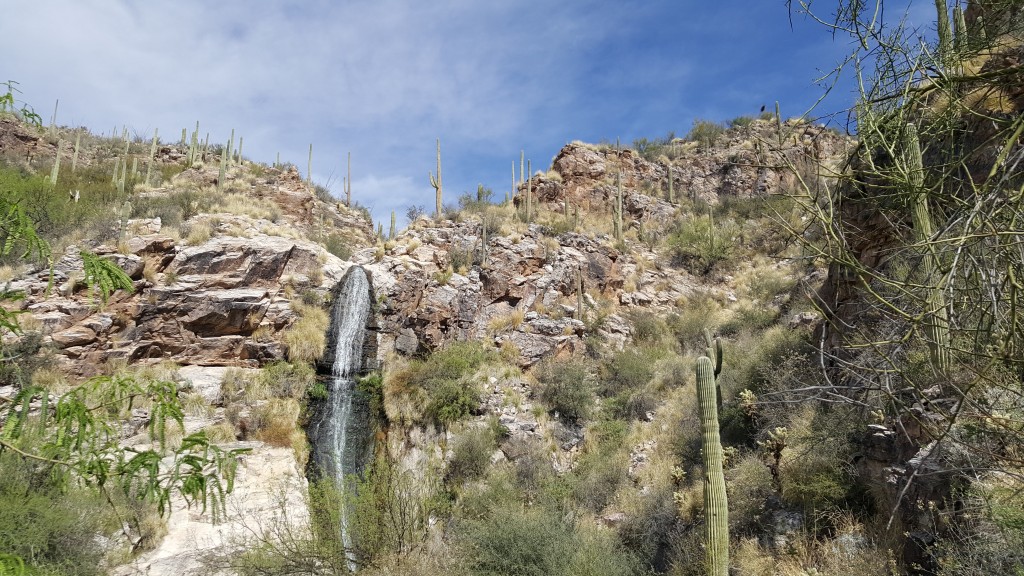 Just a partial view of the Ventana Resort’s backyard.

We had a chance to get to know one another – not only the Corning Gorilla glass experts  from Corning, but some incredible talents and personalities like Juliana Dever from ABC’s Castle, Dave Erasmus of YouTube fame, health enthusiast Teresa Howes, former NFL linebacker Dhani Jones, Nicole Juneja from New Delhi, Nick Miller from South Africa, Casey Schreiner from Modern Hiker, Ankit Vengurlekar and my old buddy, Patrick Quinn of Life of Dad, among so many others. With so many interesting folks pulled together, I was getting excited to share this adventure.

What is Corning Gorilla Glass 4? This is the same question that I asked myself when the email came across my desk. How often have you thought about who manufactures the glass on the crutch of your life (also known as your cell phone)? Admittedly, I’ve only really thought about it after I dropped my phone out of my back pocket from the top of a sliding board on the playground of my daughter’s school, or when Mason decided to use it as a Frisbee disc and spin it into the walk-in shower and it shattered. The reality is that the glass on your smartphone is the one thing that you probably use the most – and Corning Gorilla Glass 4 could very likely be part of your device. Along with being visually stunning, it provides EXCEPTIONAL damage resistance to the scratches and bumps of everyday use – which now means something to me, as a stay-at-home dad of three little kids. Calculating the abuse my phone takes in a single day would require a math wizard, which I am not.

The bloggers that accompanied me in Tucson, as well as myself, rely and depend on our devices to relay images and create powerful content for our readers. So Corning decided to run some demos to show us how tough this glass is.

Pretty impressed with the 128 gram inclined plane test that determines retained strength after a piece of glass becomes scratched. No surprise #GorillaGlass4 withstood the challenge. #InspiredTough

As well as allow us to give it a shot too… For one demo, I used a metal ball pen rod; for this one, it was simply the eraser of a pencil.

The Corning Gorilla Glass team encouraged us to take a Galaxy Note5 WITHOUT A CASE and take a hike out back through the desert to the waterfall and take some pictures. My friend Teresa and I shared the same level of anxiety – I rarely take my phone ANYWHERE without a case, let alone the middle of the Sonoran desert with jagged rocks and a million things that could scratch, dent or destroy it. Little did we know, the Galaxy Note5 already had the protection help we needed – Corning Gorilla Glass 4.

The very next day, they upped the ante and told us to take the device on a jeep rally through the desert. UMMM, what now? So we did.

We hopped into a few jeeps, guided by legit cowboys – I rode in the lead wrangler and our guide, Kurt, hopped out in front of the hotel with a Colt Peacemaker and belt of .45 caliber bullets strapped to his belt. He tipped his cowboy hat and adjusted the bandana around his neck. I was starting to wonder exactly where he was taking us and if we were every coming back.

We drove for about 20 minutes, snapping pictures of the mountain range and multitude of desert plants as the warm wind and dust ripped through our hair and shirts. And that’s when Kurt took us off the road and into hundreds of acres of desert ranch land. He educated us on the history of the Sonoran Desert and its initial settlers, and stopped from time to time to let us chew on creosote leaves and eat fruit from the barrel cactus. We also stopped a few times as rally teams to toss horseshoes, fire a bow and arrow, rope metal cattle and shoot hanging pie plates in the distance. Cowboy Kurt and Teresa look on as I score one measly point while throwing horseshoes from the jeep. 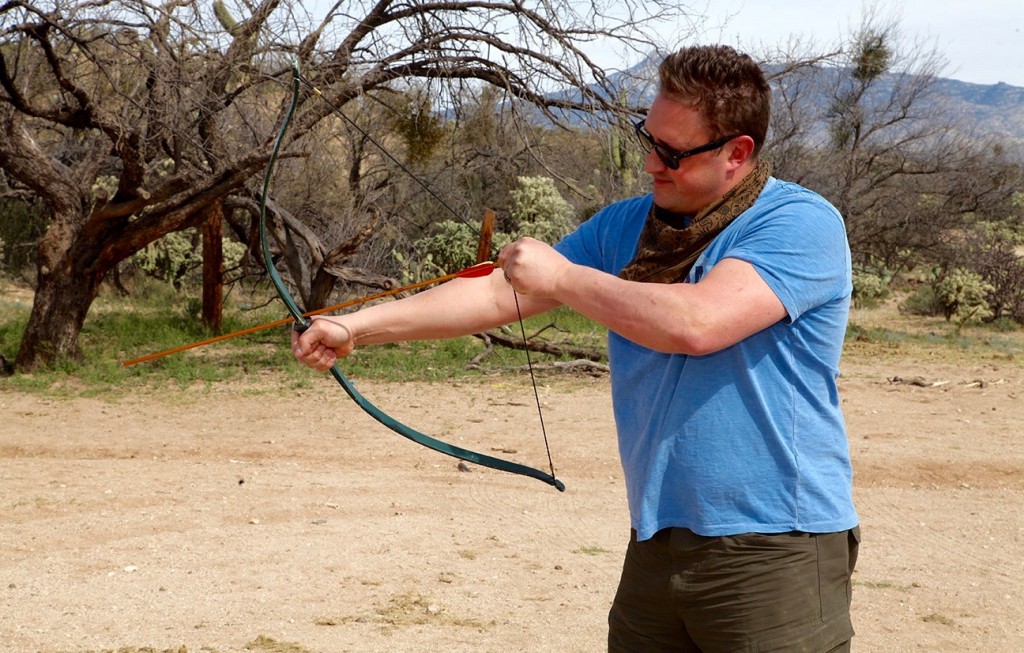 I feel like maybe I needed a bigger bow. This honda knot was set up for a righty and this guy is a lefty – hence the reason that Patrick and Teresa are laughly wildly as Kurt makes an effort to comfort me.

We also took our Galaxy Note5s with Corning Gorilla Glass 4, Corning’s toughest cover glass yet, onto exposed rock faces at a higher elevation, revealing petroglyphs that are estimated to be over 700 years old. 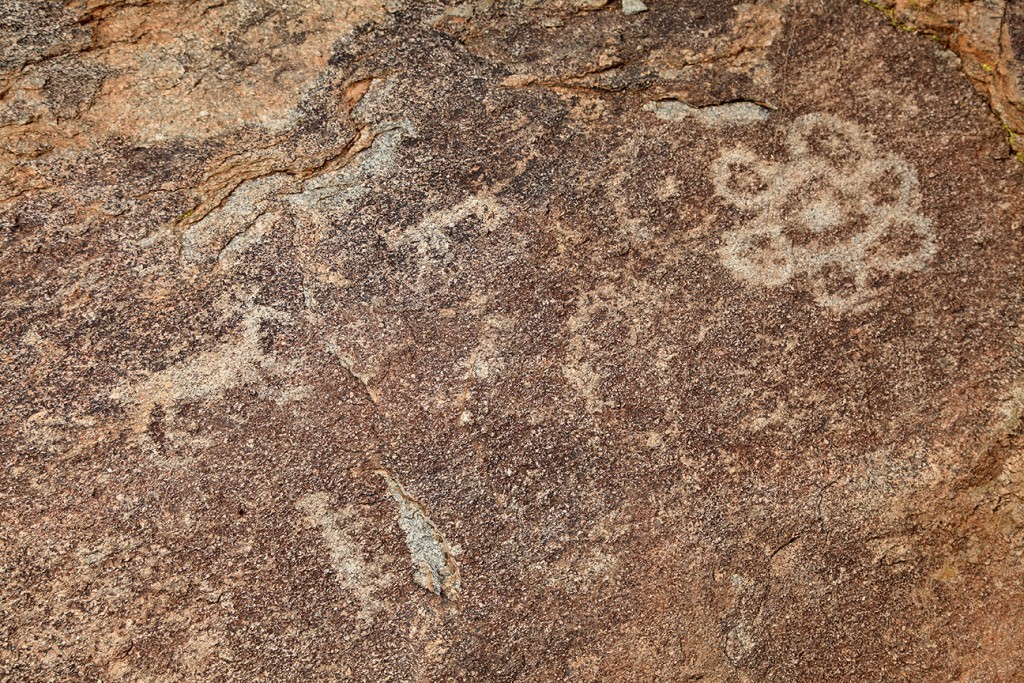 Amazing that these drawings have withstood the test of time.

We also had time for some fun. 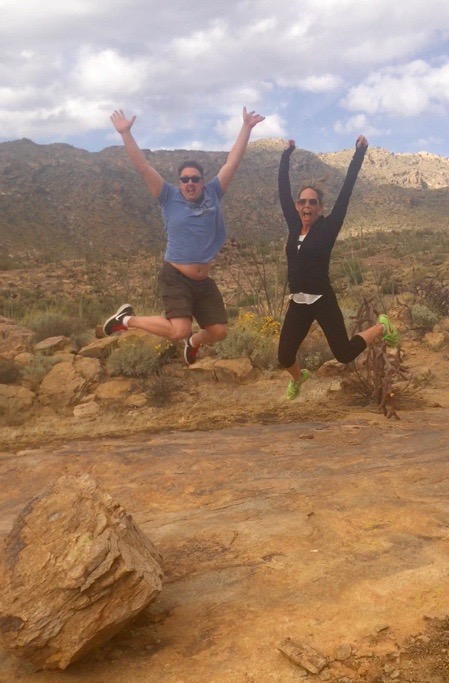 I’m still not sure why Teresa and I can’t dunk. 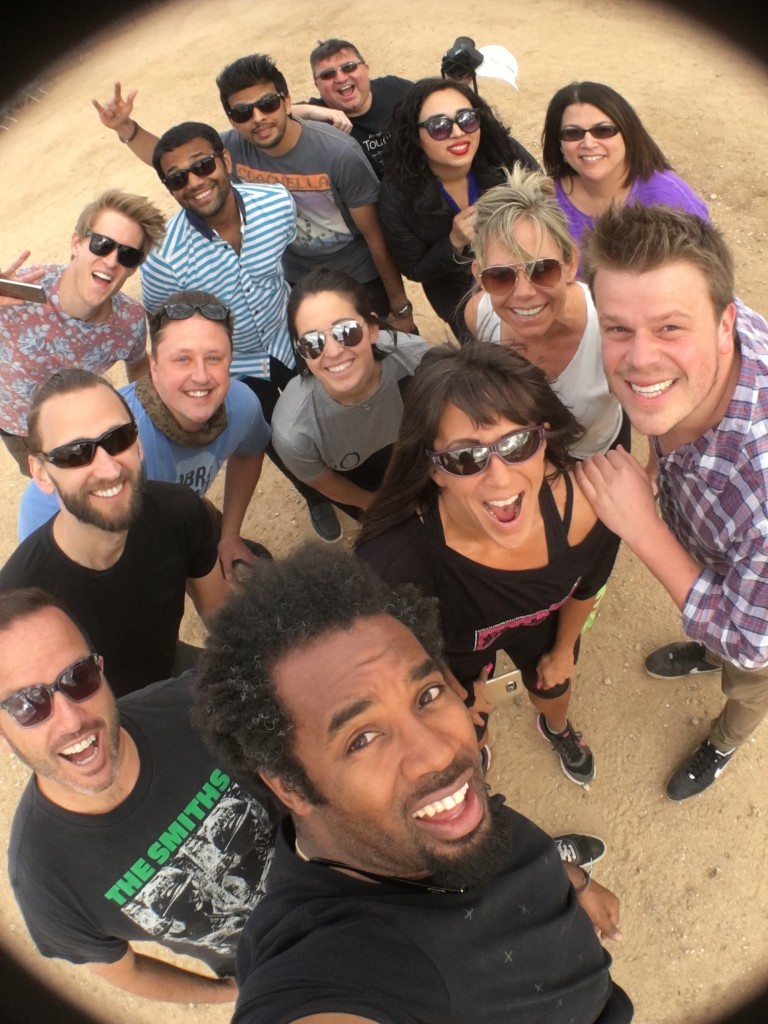 Great picture that Dhani took of a few of us before we got into the Jeeps to head back.

And a few of the cowboys brought some friends. 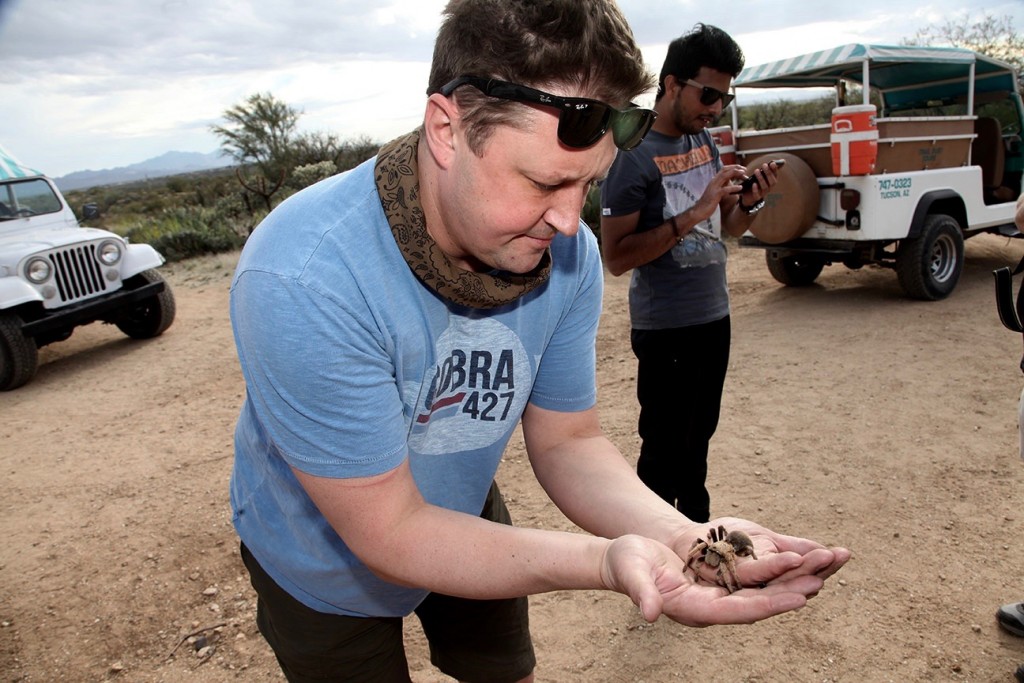 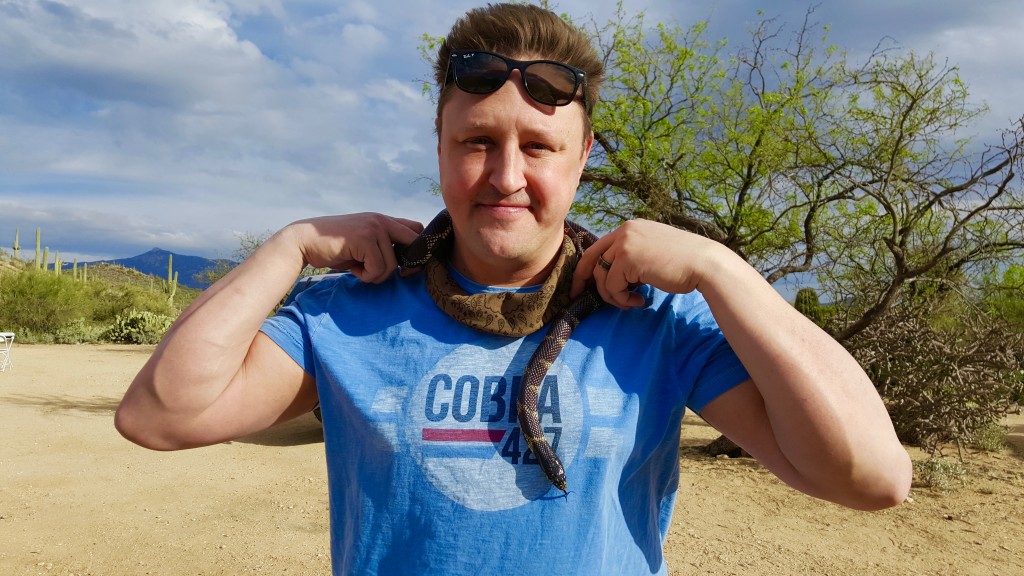 It’s just a cobra around my neck, NBD.

On the way back to the hotel, I couldn’t help but think of the comparisons between the brand that had brought me here and our surroundings. Hundreds of years of heat, weather and natural occurrences have forced the plants and animals in the Sonoran Desert to be tough, and they continue to get tougher. It hasn’t been hundreds of years, but the same goes with Corning, which is constantly trying to make something stronger for us to use in whatever desert you call life. Corning Gorilla Glass 4’s proprietary fusion process is at the core of its leadership in glass technology and cover glass industry. So the next time you pick up and drop your cell phone and it doesn’t break, perhaps you’ll wonder if you’ve had something with #GorillaTough in your pocket the whole time.