Up until a few weeks ago, I had been making two dinners a night. I’d make one for the kids and simultaneously, one for my wife and me. We’d give the kids a bath, read stories and get them in bed. After they were zonked, she and I would sit down and revel in the opportunity to actually taste our food and carry on a conversation without the wildlings heaving food at us or instigating contests to see who could scream the loudest and longest.

This ‘two meal’ practice all started a few years ago as I was exploring my culinary passions as a newly minted stay-at-home dad, cheffing up meals that I didn’t feel their palettes were ready for. This was the impetus for what would eventually become the norm. BUT ALSO THE SILENCE. WE ENJOYED THE SILENCE.

In recent weeks, we’ve both realized that it was too laboring to keep up the pace of this regimen, plus the lack of having the ‘family meal’ was beginning to become a tad disconcerting.

My kids are still young (7,5,3), however I know that many other families have a ‘game night’ or ‘movie night’ – an evening that everyone can just spend together, talk about their week and beyond all, create memories.

I began thinking about these themed evenings and suggested the idea to my wife, who was all for it. In fact, she’s always been the one that felt like it was way overdue.

So we decided to make Friday nights our designated night for family time. On our most recent family night, I had the idea of revisiting some of the greatest film moments of the 1980’s, and what better pairing for this kind of thing than the flavor that defined the decade: Ellio’s Pizza. One box can feed our entire family and with six different flavors and two different styles of crust, what better way to crush a Friday night than with an #80sPizzaParty, amirite?

I teased the idea with the kids early in the week and they welcomed it with open arms – however they seemed to be more excited about a ‘pizza night’ rather than suffering through Dad’s 80’s movie archive. Nevertheless, I began to pull aside potential titles (keeping in mind their ages) including The Goonies, Gremlins, Ghostbusters, Teen Wolf and Teen Wolf II. And what I lacked in the DVD closet, I made up for by consulting Netflix and Amazon Video and finally we had a pecking order for the weeks ahead…

And during that process, I came across a perfect film for our inaugural showing – the Indiana Jones Trilogy.

I took a few minutes to load up our selection and preempted the event by telling them a little bit about Raiders of the Lost Ark. I tried to explain to them that Dr. Jones was an archeologist, historian and professor and that he always carried a revolver and his trusty whip. I also may have mentioned that he was somewhat of a ladies’ man, however, they weren’t really sure what all that meant – so I digressed.

With the oven preheated to 425 degrees, I tossed my Ellio’s directly onto the rack. Ellio’s uses only the freshest ingredients (including 100% real cheese) and has zero artificial flavors, which makes these rectangular slices of heaven the perfect snack — or in this case, MEAL. One of the best parts? They’re ready in less than 11 minutes. 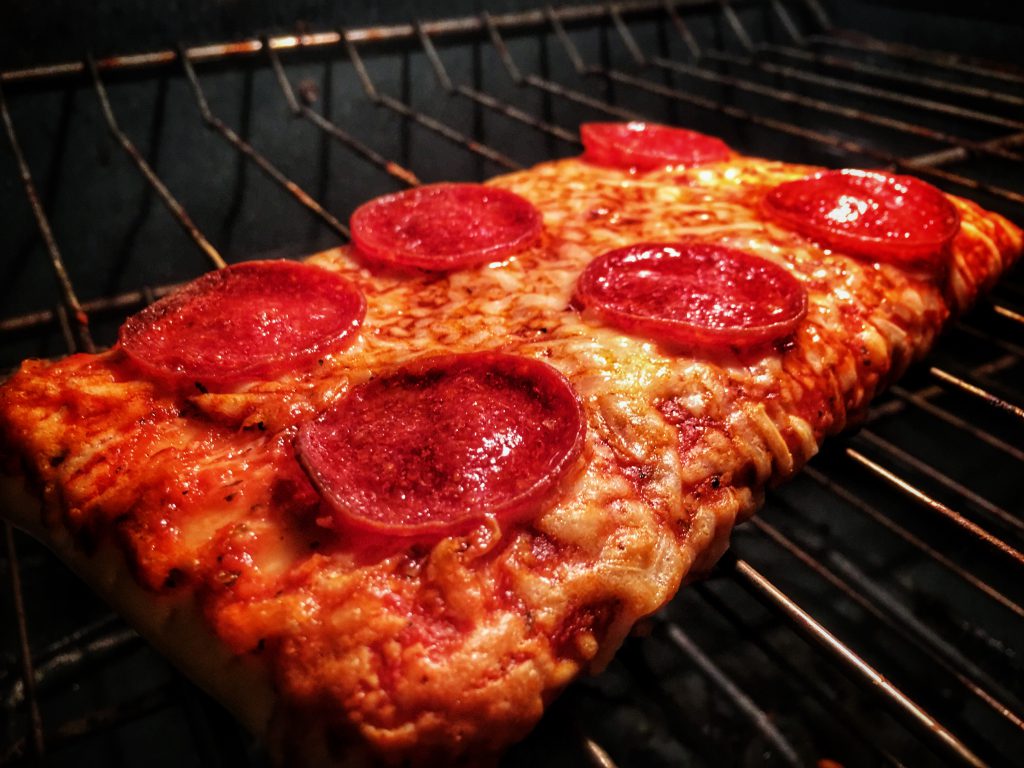 One of my favorite things to do with Ellio’s is to use up some of the leftover stuff we have from a week’s worth of packing school lunches to eliminate waste – I call it the ‘kitchen sink pizza’. I’ll add turkey, pepperoni, black olives, green olives stuffed with garlic and sun-dried tomatoes. This week, I also added some grilled veggies we had left over from Mother’s Day. This kitchen sink pizza crushes!

With the kids already smelling the aroma throughout the house, they gathered at our pub table and brought with them their latest obsession: colored in pages upon pages of Emoji’s and Minecraft images. 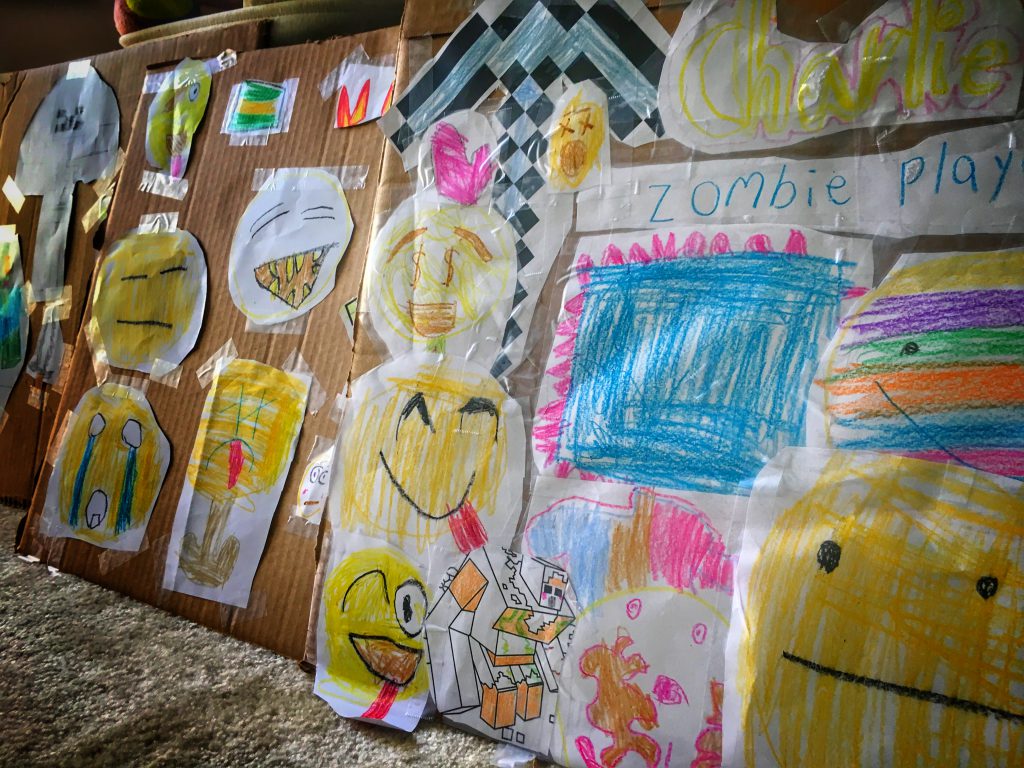 They’ve been absolutely consumed with these and ask me daily if I can print up pages for them to color. Not only did I agree, but I began cutting up cardboard boxes from the recent move and gave them the option to tape or paste their artwork onto them, telling them that we could create a little art gallery of emoji/Minecraft boards in the upstairs play room. 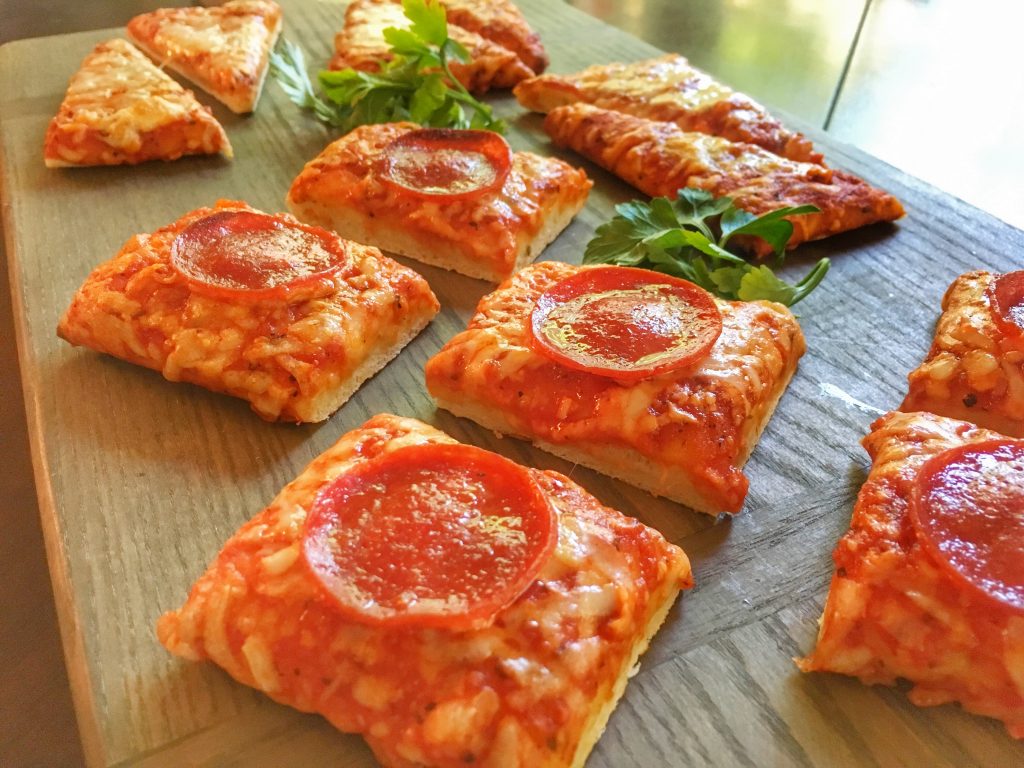 I tried to tell them that 1980’s video games were most likely the inspiration for the emoji/Minecraft game – pixelated humans and creatures dominated that decade for me, which makes it so much easier for me to get on board today.

With our pizza served and Raiders of the Lost Ark cued up, I realized that this evolutionary step we took as a family just might be the best thing that’s happened so far. 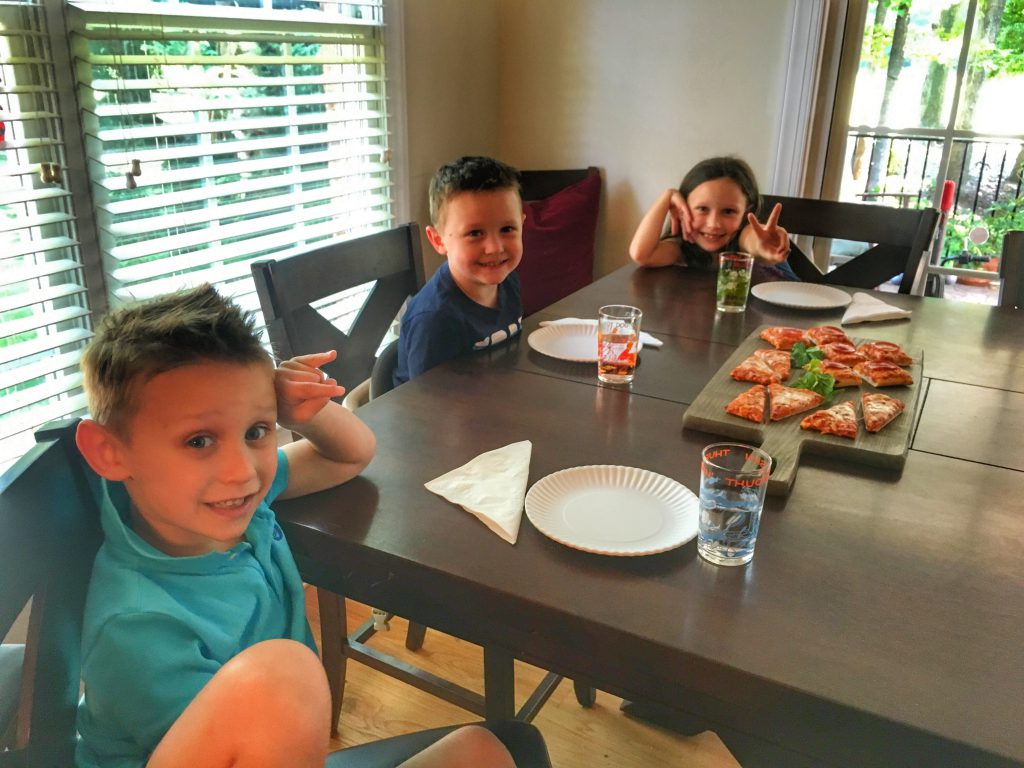 There’s nothing better than spending time together – smiling, laughing and encouraging my son to become an archeologist so I can go with him on his adventures when I hit my golden years.

EDITOR’S NOTE: This was a sponsored post on behalf of Life of Dad and Ellio’s Pizza and their #80sPizzaParty campaign – with or without robots. 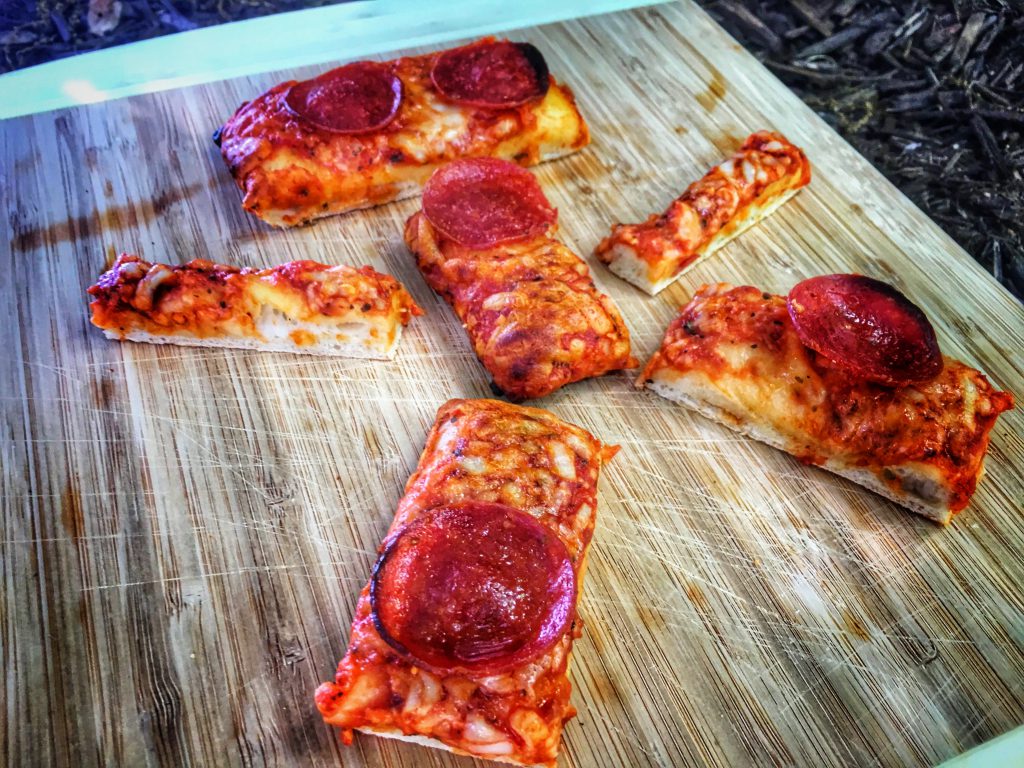 For more information on Ellio’s and where you can snag some for yourself, check them out here. You can also visit them on Facebook, Twitter and Instagram.