A couple of weeks ago my wife and I went to orientation at Charlie’s new preschool in the evening… Ava, Charlie and Mason played in one of the classrooms along with a dozen other children while the parents attended a short informational meeting – evidently, that’s our new ‘date night’. In the form of a parent meeting. We’re not complaining, we’ll take it.

After almost an hour, we went back to check on them and one thing became apparent: Mason was fully involved, playing with the other kids and as Jen and I looked at each other, we realized that maybe he needed to start school.

He was so excited. Playing, talking to babies, coloring, building a choo-choo track, spinning, dancing.

Neither of us were really ready for him to start. I guess we’ve always been in the mindset that once they start, they never stop and despite my occasional frustrations that surface after being with them all day long, day in and out putting out fires, we wanted to hold onto the baby stage a bit longer.

But her and I are big believers in the “they tell you when they’re ready” school of parenting. For most things at least. We’ve never been the ones to force them into something that might not be ready for. Seeing him so invested in the preschool program at the church; seeing him exercise such curiosity and happiness was a huge gut check… so we enrolled him for three half-days a week.

And just like that, on a sunny Tuesday in the beginning of September, I had all three kids in school. Ava is in first grade full time, Charlie is in Pre-K half days Monday through Friday and Mason is going Tuesday through Thursday half days.  The first week was a bit confusing for me. After six years of almost consistently having someone yelling, screaming and running around the house full-tilt… it was eerily quiet as I opened the door and sat down at my desk staring at my computer.

I almost didn’t know what to do with myself.

I went to the GYM. I grocery shopped without interruption. I read a book with the bathroom door wide open. I did my early tax preparation. I outlined my second book. And that was just the first day.

With day two, came cleaning the house and the HOA-mandated curbline and driveway edging (weeding) was completed. Day three sowed an Ina Garten-worthy meal on the table and the clothes in our closets organized by color.

By the time Friday rolled around, one thing became apparent: I missed my kids.

I’ve gotten used to Ava being away during the daytime but this last minute preschool enrollment caught me a bit off guard.

On my way home from picking all the kids up from school on Thursday, we were involved in a multi-vehicle wreck only a mile or two from the house and I nearly totaled our truck.

The kids and I were okay, but it serves as a reminder that LIFE happens, whether it’s good or bad. You just have to roll with the punches.

On Friday morning, as we laid together in the living room recovering, thinking about how our truck was towed away on a flat bed, I thought about how the situation could’ve been much worse and that we were lucky.

With the kids being gone most of the week and Hurricane Matthew giving Southeastern coastal Virginia a lashing with heavy rain, winds and flooding – what better time than to open up a little care package from the folks at Life cereal?

Earlier in the week, they’d sent us everything we might need to build our own living room fort. 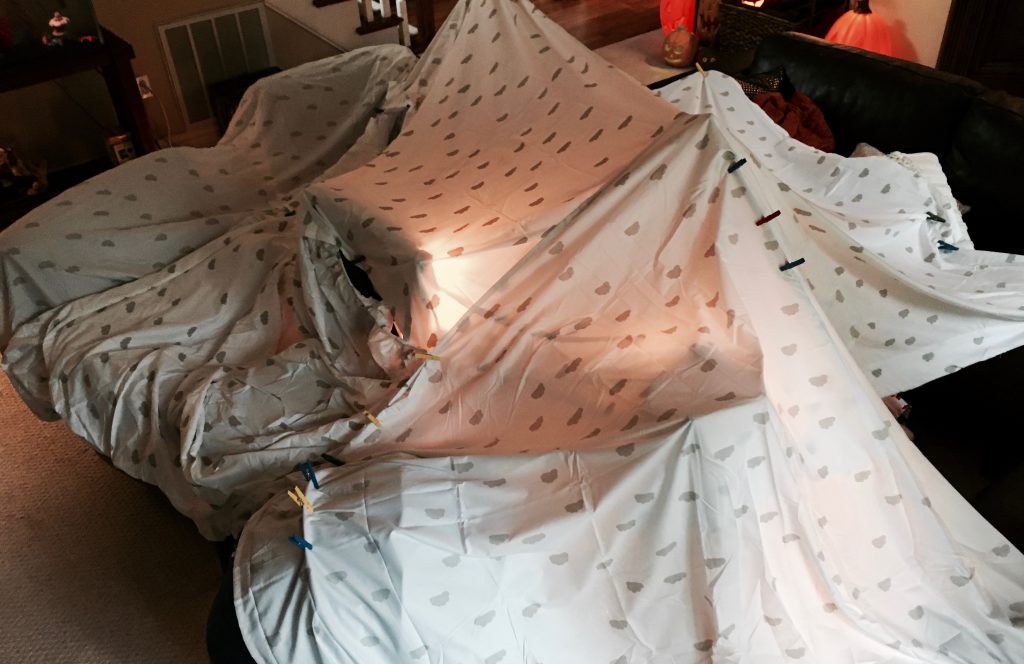 This was the perfect thing to do as the wind whipped the trees and rain against the house. We pushed a few chairs around the sofa and began designing our hideout. Jen couldn’t resist fort temptation (honestly, who can?) and joined us during construction. 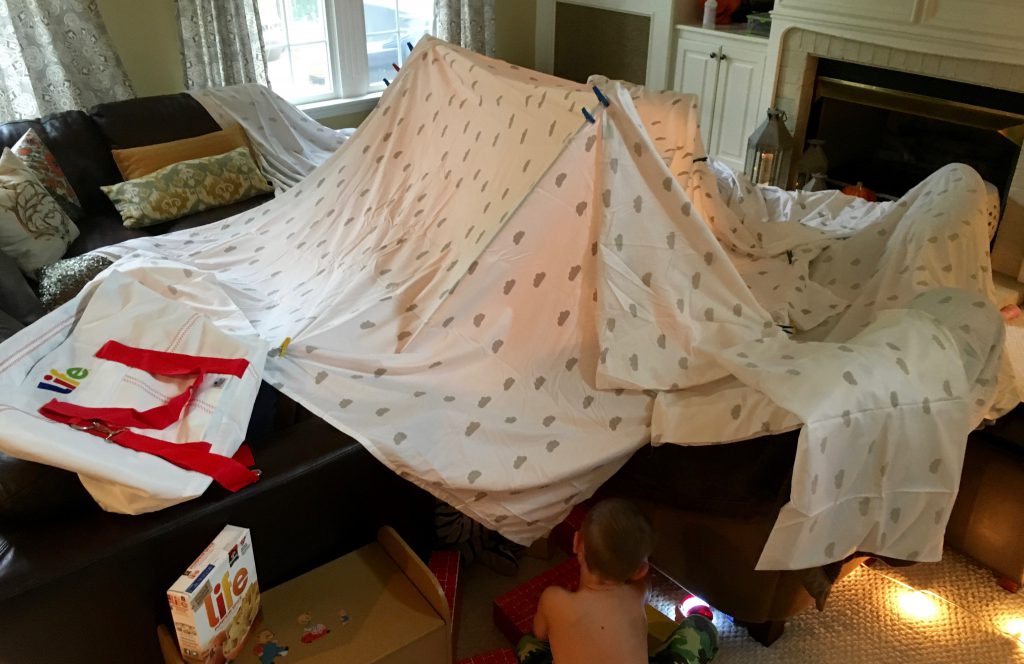 I once read that there are only 936 Saturdays from the time your child is born until the day they leave for college… so how are you going to spend one? Make them all count… Life cereal, cartoons, superhero battles, reading Halloween books and falling asleep on each other in the depths of our pillow and linen cave – a pretty perfect Saturday. 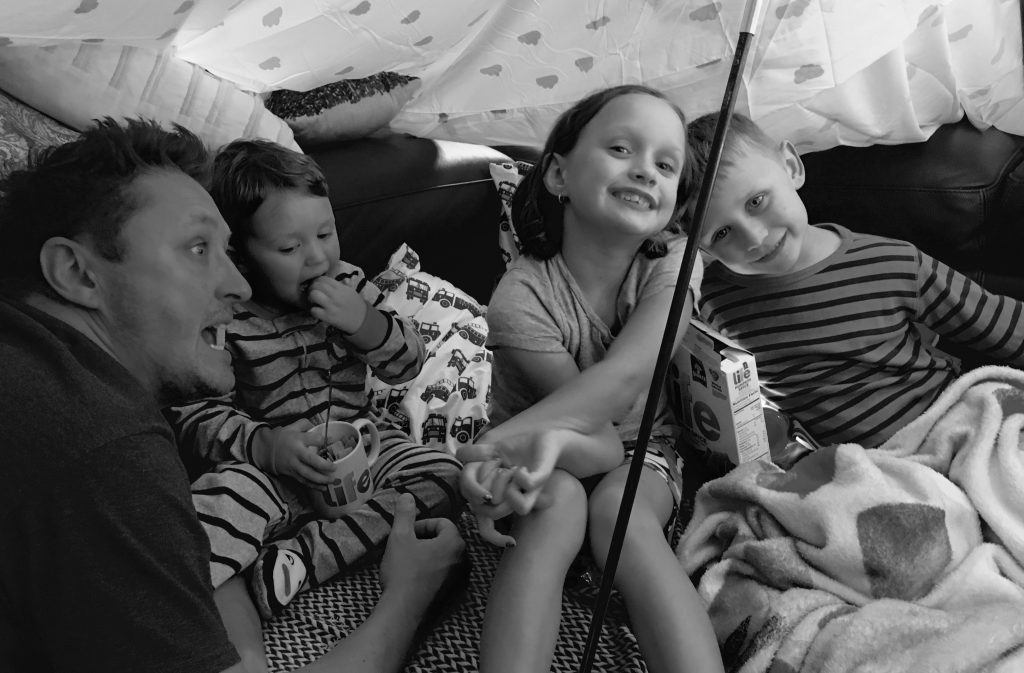 I think the little kid on this video sums it up best – “The best moment to be happy is the one happening right now…LIFE, enjoy all of it.

EDITOR’S NOTE: This was a sponsored post on behalf of Life Cereal and their #TeamFamily campaign, however, the architectural stylings and stability factors of that fort (along with the story) belong to me.