So far, this summer has put a smack-down on me.  It’s literally had me up against the ropes in a choke-hold begging for mercy.

Between traveling up and down the eastern seaboard to promote a book, the kids being out of pre-school and moving into a new house, I’m out of breath.  I’m sure a lot of you are too.  Graduations, birthdays, weddings and vacations — before you know it, you’re running out of time to do half the stuff you had dreamed about in December while hunched over the snow shovel in your driveway.

For me, personally, I’ve always loved the summer.  Being outdoors rejuvenates my soul.  It makes me want to dance (but seriously, I’m horrible, so that’s not actually happening).  After working myself to the bone in the weeks leading up to my book release and Father’s Day, I was feeling completely burned out but could see the light at the end of the tunnel.

Along the way, some amazing things have happened, one of which is being one of 20 members inducted into Target’s Inner Circle.  Target started this program to give a handful of social media influencers the opportunity to see past the aisles and racks at the store and provide an all-access pass inside the cerebrum of one of America’s biggest retail companies.

They took some time to get to know me over several weeks and we talked about our plans for the summer.  I complained about how little time I felt like I had to enjoy some of the outdoor things I’m most passionate about, for instance, camping.  On average, I used to go camping at least a dozen times a year, but that was before kids.  Since then, it’s always seemed like it was either to hot or too cold or they were too young.  But now that Ava will be 4 in October and Charlie just turned 2, I think they’re ready to get a taste of the great outdoors.  My problem was that all of my gear had been packed away for the move to a new house and our schedule didn’t afford us much travel time to get deep into the woods… and that’s where my friends at Target stepped in to help me out.

I knew that we would be at my parents house over Father’s Day weekend and considering that they live in rural Pennsylvania, why not bring the fun and excitement of the great outdoors to their backyard for one night?  I ran the idea by mom and dad and they were excited about the idea!

So we pulled together a few of the basics. 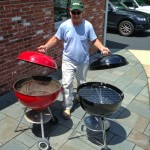 I knew that we’d want to fire up some sort of grill for dinner and remembered from our last visit to my parents house that dad’s was looking pretty rough.  I’ve always appreciated the mileage that he insists on getting out of EVERYTHING.  Seriously, I think this dude has a few shirts that are older than me.  He’s a self-proclaimed charcoal snob, so I picked up a new, black Weber for us to break in.  As I pulled it out of the back of the car and put it together in the backyard with nothing more than my Swiss Army Knife, the old man came out of the house with a huge smile on his face.  He was extremely excited to see a new toy replace the old one and literally blew my mind after he told me that, aside from a broken wooden handle, ‘Big Red’ had lasted over 25 years without disintegrating into the Earth!

So we fired it up for it’s virgin run and overloaded it with kabobs and corn.  There’s something about the smell of food on the grill that just puts a smile on everyone’s face.  Even though my youngest brother couldn’t be there, it was pretty cool that three generations of Kulp men got to share a little manly Father’s Day moment. 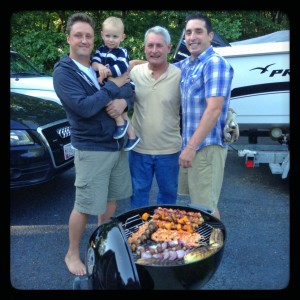 We snacked on those sticks filled with veggies and meat and while I waited for the coals to die down, I set up the tent and broke out the new sleeping bags for the kids.  I also had a feeling that the old man wouldn’t appreciate it if we just threw some logs down on his manicured grass and lit them on fire, so I put together this sweet little fire pagoda and pulled some old Cub Scout knowledge from the archives and built a little log tee-pee. 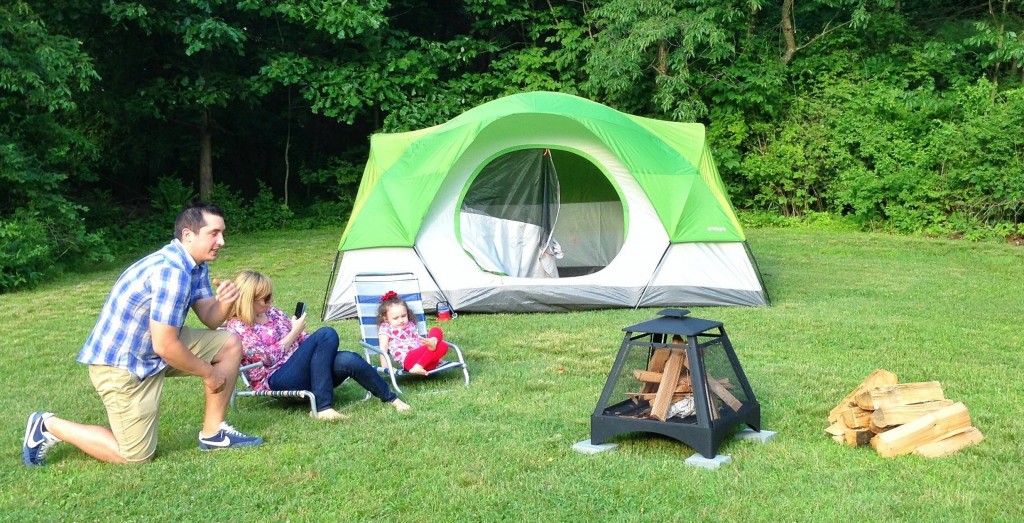 The briquettes were a faint orange and there was something that I wanted to try.  While Pop-pop and the kids picked wildflowers and watched the Hummingbirds feed, I prepared some ingredients for a spin on a grilled Thai sweet & spicy pizza recipe I remembered seeing on Gina Homolka’s Skinny Taste blog.

I’d never done a pizza on the grill, so we gave it a whirl.  Since my wife doesn’t eat shrimp, this was our version: 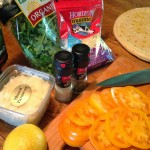 *Drizzle a thin coating of olive oil over the crust and spread evenly using a brush (or your fingers if you’re a caveman like me).  Slice your heirloom tomato and distribute over the crust.  Squeeze the juice of the lemon over the top of the tomatoes and then cover with a generous helping of arugula.  Sprinkle approximately 2 cups of the mozzarella equally over top and finish off with a handful of the shaved parm or asiago.  A little salt & pepper to taste and toss it right on the grill.

This thing turned out to be amazing. 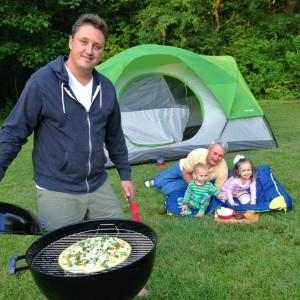 With the sun going down, I turned on the AM broadcast of the Phillies game and lit the fire.  We pulled together some marshmallows, chocolate and graham crackers and began the s’mores making process. 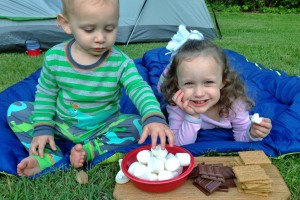 The nostalgia of the moment, the crackling of the fire, the kids laughing and adults telling stories as the lightning bugs started to make their appearance, made it one of the best Father’s Days on record.

I was so worried that I wouldn’t find the time this summer to take the kids on a proper camping trip, but lo and behold the great outdoors was right there in our backyard. 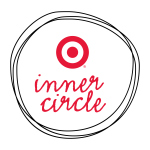