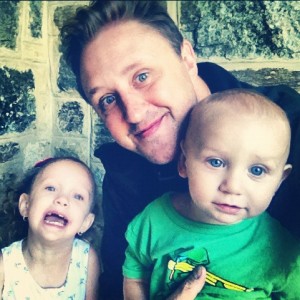 I have tons of fond memories of growing up in rural Pennsylvania with my two brothers and our mom and dad. Every year, before Eric, Travis and I were old enough to really make any money, my mom would give each of us five bucks, take us to the local mall and turn us loose. Our mission? Get “something” for Dad for Father’s Day.

Mom always got him the “big gift” from all of us, but I think she felt it was nice if we all played a part in the process, by choosing individual presents, too. In my head I’ve put together a montage of the various looks on my dad’s face, as he opened up the “junk” we truly thought were exceptional gifts. I mean, how many plastic flashlights can one man possibly need?

Every Father’s Day since, if we’re lucky enough to spend the holiday together, my brothers and I still crack up, thinking back about some of our “choice” purchases. The old man was a good sport and played along enthusiastically as he opened yet another 3-pack of golf balls (those were on the high end). The real hysterics came, though (from us, that is), when he unwrapped his terrycloth headband/wristband combo pack (sport-striped), keychain featuring Mr. T himself pointing and saying “I pity the fool” and money-clip emblazoned with a crystal-studded dollar bill sign. And that was just from one year. Multiply that by about ten, and you can imagine the treasure trove Dad probably built up in his sock drawer.

And each time, we’d let him squirm a bit before Mom finally brought out the “real gift,” which was usually some sort of power tool or a new pair of work boots—stuff he really wanted. Later in the afternoon, he’d take my brothers and me out on the boat fishing. Occasionally Mom would join us, but I think she secretly enjoyed having all the men out of the house for a few hours so she could salvage anything we hadn’t completely destroyed.

Now I’m 37, married and have two kids of my own—3 ½-year-old Ava and nearly-2 Charlie. We haven’t really established a Father’s Day tradition yet, and maybe that’s because we’re somewhat non-traditional. Unlike my dad, who worked outside the home full-time, I’ve been a full-time stay-at-home dad for a little over three years now…

To continue reading, go to Safely.com…