“You should get a job”, my accountant said to me, as my wife and I sat across from him in his office in early April, preparing our tax returns.

Let’s get one thing straight.  I’ve always fancied myself as a lover, not a fighter.  I’ve almost always tried to avoid violence as a way to deal with conflict.  But I recognized the feeling that was coming over me.  My heart rate had accelerated and a werewolf scowl came over my face, complete with glowing eyeballs that had a missile-lock on this dude at his desk.

In my mind, I had already lunged across the table, blowing him off the back of his chair.  I had him pinned down, my knees on his arms while I gouged his eyes out with a Bic pen.  I flipped him over, at first trying to choke him out with his own necktie, but then switched to The Iron Sheik’s ‘Camel Clutch’ because he didn’t deserve such a quickly expedited death.

All I kept thinking was, I have a job.  I have like, twenty jobs.  But that’s not how our accountant was looking at it.  He wanted to see me stroll in with a big ole’ standard W2 that had a fancy company name, not a handful of 1099’s and royalty stubs crumpled into my diaper bag.

But then I lost my job.  My position as an executive was eliminated.  At the time, it made the most sense to our family, for me to stay at home with the kids and take daycare off the table, while my wife continued to work.

Three years later, maintaining a household and taking care of two toddlers has been exhausting and challenging, yet rewarding at the same time.  But it took me several months to realize that.  In the beginning, I needed a distraction, something to take my mind off of being thrust into an unexpected situation.  I wanted something aside from parenting that I could get excited about.

So I began to write stories, but I didn’t have anywhere to put them.  I brainstormed some catchy names and surprisingly, found one that wasn’t taken yet.  I proceeded to launch Dad or Alive, a blog about my experiences as a full-time stay-at-home dad.

After a few months, the stories attracted the attention of a literary agent in NYC and upon her suggestion I spent a few weeks crafting a book proposal.  As I managed the day-to-day with the kids, I waited with bated breath for her to call and tell me that it was all for naught, the publishers have passed, OR the alternative.

She called me with the alternative.

Penguin Group had bought my comedic memoir about becoming a father for the first time and my subsequent year as the patriarchal primary caregiver.

This was amazing.  I felt like I had done exactly what the old trope says, I made lemonade out of the lemons that life had given me.

The publisher gave me a year to write it.  That seemed like plenty of time, but being a husband and a dad can be an incredible amount of work, especially if you’re the stay-at-home type.  I spent the first six months ‘percolating’ on ideas while I continued maintaining the blog, scrubbing crayon from my walls and convincing my kids that vegetables were candy. 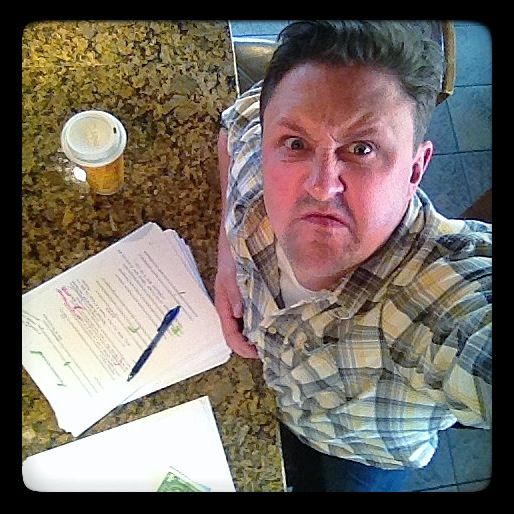 The last six months were brutal.  I yelled story ideas into the app on my phone, as I changed diapers from the back of my car in the parking lot of the grocery store.  I jotted down thoughts on paper towels and receipts as I shuffled along in my everyday errands.  I spent early Sunday mornings taking over the counter at the coffee shop with my piles of disheveled papers… and I spent five to six nights a week, after the kids were in bed, banging away on my keyboard with bloodshot eyes, addressing notes from my editor like ‘not that funny’ and ‘OMG, did this really happen?’

I finished the memoir this past December and it hit the shelves last week.

I sometimes wonder whom I wrote this book for.  In the short term, I think it was for me, to pat myself on the back for taking a road less traveled, as a stay-at-home dad.

But in the long term, I’m hoping it will benefit my kids.

When they’re old enough to appreciate the humor, they’ll be able to look back at the picture of us on the cover, and begin to understand exactly how much it meant to me to be their dad, how I picked myself up, dusted myself off and evolved as a man and as a father…

“Adrian?  Adrian!” my wife said, as she nudged my arm, raising her eyebrows and breaking me from my reverie.  I could tell she wanted me to say something, to engage in conversation.  “I’m sorry, what’s that?” I asked the accountant.

I think he could sense that he might’ve hit a sensitive spot with me and began to quickly explain exactly what he meant.  His point was, in the short term, while we may not need the money, it’s probably not a big deal… but in the long term, I was doing us a disservice by not contributing to Social Security or Medicare.

As adults, we’ve been conditioned to calculate our worth by our titles at work and how many digits are on our paystub.  As stay-at-home parents, it’s easy to undervalue ourselves and perhaps that’s why I took offense when our accountant told me to “get a job”.

I know that he didn’t mean to insult me.  And I probably shouldn’t have nearly killed him in my imagination… but the way I see it, I’ve got a job.  I’ve got a GREAT job and it’s called being a dad. ADDITIONAL EDITOR’S NOTE:  This article first appeared at The Good Men Project.  As part of an all-out marketing blitz (and a way for me to buy groceries next week), I’m still loitering at the bottom of my blog posts, letting you know that I wrote a book for Penguin Publishing that arrived in stores this week.  It’s a comedic memoir about not only becoming a dad, but ALSO an unexpected STAY-AT-HOME dad.  With Mother’s & Father’s Day coming up, it might make a pretty cool gift for someone you know…click here to order it now