My wife says that everyone has stopped reading my blog because they’re sick of hearing about our road trip across the country where nothing happened.

This will be the final chapter in the ‘reverse Griswold’ saga.  Here are the Cliff’s Notes.

We left Texas and briefly drove through Oklahoma. Apparently I was reaching for jerky, took my eyes off the road and had to reverse on the interstate for this picture of Arkansas.  According to my wife, I could’ve been arrested just so you could see this dumb picture.  Hope you can sleep tonight. 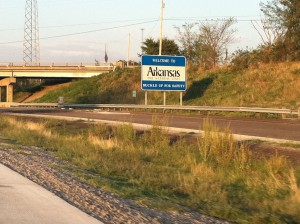 You might be a redneck…….if you change your kid in the parking lot of an Arkansas Cracker Barrel.  So what.  Move along.  Nothing to see here. 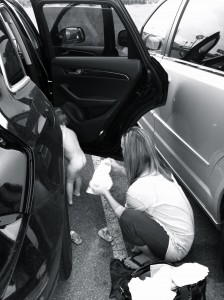 I nearly died trying to get the camera app ready for this one.  What better place to put the state sign than in the middle of a bridge, where no one can pull over and enjoy counting all the E’s, N’s and S’s. 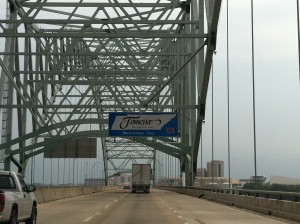 Here’s me, with like, thirty strollers on Beale Street in Memphis.  I had ribs, she had something, can’t remember.  Kids screamed, both of them shit their pants and threw food at me while some guy with a beard played an upside-down bucket and blew in a jug on stage.  Cornbread was good. 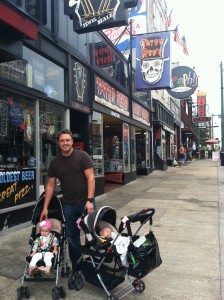 I wasn’t even sure this was the state sign.  Thought it said vagina at first, so we pulled over. 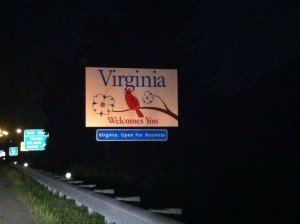 My wife pleaded with me to stop off at a backwoods Target so she could buy $500 worth of Missoni clothing that she was going to ‘sell on ebay’ because people were paying 10k for it.  Never happened.  Bunch of migraine sweaters draped around the house.  The only reason I don’t look angry is because she took me to Chick-Fil-A (we share a checking account, I lose in the end) for lunch. 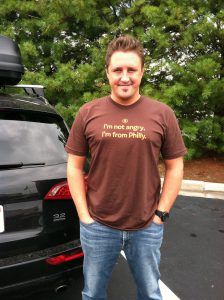 Collectively we felt like we spent too much money so we stayed in a Motel 6 on the last night.  I wore shoes to bed in case I had to walk to the bathroom and piss in the middle of the night.  I missed the Maryland sign because it was raining and I was in the HOV lane, on the wrong side of the beltway. 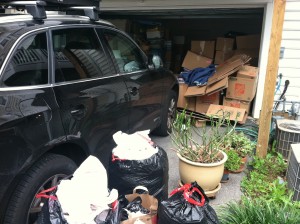 Pulled into our new place.  Unloaded the 28′ trailer into our garage, got a double hernia and started to unpack.

Next week I’ll get back to what everyone wants.  My kids screaming, wearing hats, throwing food, breaking my cherished possessions and degrading myself.

Have a great weekend!