For those of you who didn’t already know, my family and I decided to move away from Los Angeles a few weeks ago.  String bikinis, medicinal marijuana and ’70 and sunny’ became too much for us to handle.  We yearned to live in the only city in the nation with more traffic, closer to the incessant exercising of our right to peaceful demonstration and monuments with no parking.  Instead of actors, we get politicians.  Instead of flip-flops and a Corona, we get snow boots and a thermos.  We settled on a place where you can not only go to the park and mingle with war heroes and policy-makers, but also see a woman in a Snuggie walk her dog.  Deep in the suburban ice belt, we found our new home in Rockville, Maryland.

For the record, no one over 30 should ever have to move anything, anywhere, ever again, in their lives.  Four weeks ago, when my wife asked me how she thought we might approach a 3,000 mile relocation, I handled it like any other neanderthal Archie Bunker would.  I told her that only suckers paid for movers and doing it myself would be ‘good exercise’ for me.  I pulled my ‘manual labor cut-off sweatpants’ out of the archives, ordered up a 28-foot tractor-trailer and had them dump it on my street. 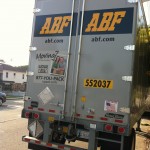 Within 2 hours, LAPD and parking enforcement had me pulled over and close to ticketing, without even moving.  Evidently, I had instructed the driver to drop the trailer on a residential street, which prohibits commercial vehicles over 22 feet in length.  For added measure, I told him to plop it down so that it fully blocked the view of the 300 neighbors in my complex while they attempted to pull out of the driveway.

I turned on the charm (begged like a whimpering bitch) for these dudes to not write me a ticket.  It’s widely known between men, that if you tell another dude who is in a position of authority that ‘my wife is gonna come out here and tear me a new one’, you do what you have to, to help out ‘said’ dude, so he doesn’t get his sack handed to him on the street in the middle of his own neighborhood.  It’s code.  TO SERVE AND PROTECT.  Luckily, for me, my phone call to the dispatcher uncovered that the truck driver was still in the area, so he drove back to help the dumb gringo (me), sobbing in the street in my cut-off sweatpants.  He hitched up and pulled me around the corner, even further away from my apartment.  Sweet.

We gave ourselves about seven days to load this monstrosity.  As the deadline approached, my procrastination strengthened.  We were filling our days by visiting our favorite SoCal restaurants and attractions.  One last hooray at our favorite spots.  I combated Jen’s worry and concern by giving her the ‘if I do 8 hours straight tomorrow and the next day, we’ll be so golden, don’t even sweat it babe’.  She consistently served up a lingering ,pensive grimace, which basically meant that she had realized she married a dumb shit and this would be the event that could potentially blow it wide open.  The ‘toldja so’s’ were well on their way.  They were gaining strength and bearing down on my position.

Instead of spending our days boxing up the junk we had collected over 14 years in California, we visited the Santa Monica Farmer’s Market one last time, for some roasted corn and miniature horseshit in my shoes.  Her I am escorting Ava.  I saw the camera, so naturally, I struck a pose, instead of avoiding the huge pile of animal dung that engulfed my Adidas.  One warning would’ve been nice.  Three kids looking, no warnings.  Real fucking considerate, kids. 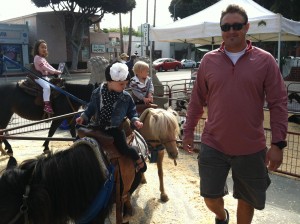 After the pony ride took my 5 bucks and public dignity, Ava decided we should also check out the petting zoo.  In actuality, she collapsed her body, putting her face to the dirty sidewalk and flailed until I gave the lady another 5 bucks.  The goats in the picture below followed us around for almost a half an hour before I realized what was happening.  In some twisted coincidence, we had dressed our daughter up like a goat that day.  They started parading around her, giving her the nickname ‘chosen one’ and were stalking us, eating processed feed out of our plastic cups.  But alas, it was too good to be true.  Ava and the goats could not sustain their new-found tribe, wardrobe aside, they had too little in common. After a lengthy day of barnyard animals, fresh fruit, super-aged cheeses and avoiding eye contact with unbrassiered hippie boobs, I had to get home and pack this trailer.  Which I did, for almost 2 hours.  But in my defense, it was friggin’ hot.

So we hopped in the pool to cool down. What I forgot was the old wives’ tale, the cardinal rule.  Wait an hour after eating before going swimming.  That’s an important one, right? 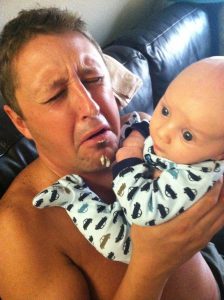 Right.  Unless you want to look like me, here, seizing up internally as baby vomit has entered my nose and mouth, while I wait patiently for my wife to (take a blog picture) grab a towel. 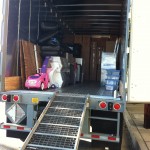 Pleading with a curt, snappy parking enforcement officer.  Incubating a double hernia from lifting boxes.  Stepping in pony shit.  Inhaling baby vomit.  Is this any way for me to spend my last week in The Golden State? I feel like a dead man walking…

And if you listen real close, you can hear my wife mumbling ‘I TOLDJA’ SO’ under her breath, somewhere out there…