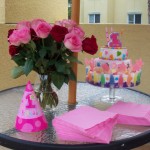 I got showered and dressed and headed for the door.  Our place was a disaster. Carrot skins and zucchini ends on the floor in the kitchen, wax soda bottles and skittles spread across the dining room table from the candy cake.  Empty paper towel and aluminum foil tubes, pots and pans sprawled everywhere.  Opened luggage and clothes strewn throughout the premises.  We had taken it down to the wire.

I arrived on the sundeck and began the greeting frenzy.  My energy levels were low, I had been running around cooking for hours and was dragging major ass.  A Triscuit here, a black olive there, it was all I had time for.  I was shaking hands and kissing cheeks like I was running for office.  I felt like I was being drawn and quartered, starting one conversation, then being torn to another and finally heard my name being yelled from across the way to let the clown in.  I wanted to dig my eyes out with baby spoons.  Yes, the clown was here. My wife had arranged for ‘Whirlie the Clown’ to make an appearance.  She was totally prepared.  I brought her upstairs with her entourage.  She asked me to join my wife and daughter in the center of the action.  I agreed and played along with one of her ‘magical’ tricks. 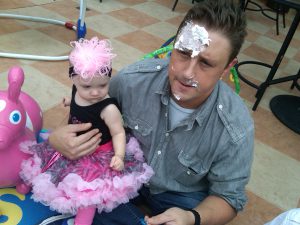 Evidently, the magic was me being punched in the face with a cream pie.  Fun for everyone, right?  I had just spent several minutes on a truck-stop shower upstairs, along with ironing a linen shirt (linen takes forever!) and was fuming internally.  I put on a forced smile and wiggled my way through the guests I hadn’t greeted yet, acknowledging the whipped cream in my eyes and charging for the stairs.

I cleaned myself off, slammed a beer to remove the edge and returned to the party. I was the first casualty of the day, but surely there would be others.  If I came back, she certainly wouldn’t target me again, I’m the host for crying out loud.  I was wrong.  The clown came right for me.  This time, it was non-diary. 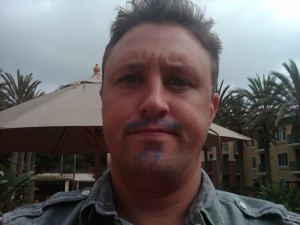 HOW ABOUT A CRAYON MUSTACHE?  I squirmed left and right, but was under a brutal attack.  She hit me with the goods.  It was a Jack Sparrow special.

I did an about-face and headed back to the bathroom, evidently this was ‘water-based’ and I ‘shouldn’t have any trouble getting it off’.  While my wife and the guests popped my daughter into the air on a multi-colored parachute, I scrubbed vigorously at my chin in the visitor’s bathroom at the gym.

I returned to the festivities, this time, with more concern.  I slithered through the party under the radar, giving quiet low-fives and drawing the least amount of attention to myself as possible.  That’s when I saw it.  A live rabbit wearing sunglasses.  Excitement moved to concern when I held him up, exposing his giant set of rabbit balls to the whole party.  These hairy testicles were suddenly the elephant in the room. 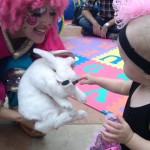 I tried to divert the kids over to another area to take the heat off of Balls Bunny.  We had a polyester tunnel system, the inflatable ball pit, bouncy seats, a Rody and padded mats with alphabet cut-outs.  It seemed to work and the rabbit went away.

I may paint a bitter picture, but the clown was a great idea.  She entertained the 20 children and kept me on my toes.  We said goodbye to Whirlie and moved on to the cake, before kids started to drop like flies for nap time.

Ava rarely eats any sweets and her eyes lit up as she watched the candle being lit on this giant sugar bomb.  Watching the smile on her face made me realize that all of the running around and preparation was worth it.  I couldn’t believe a year had passed so quickly.  I made it.  I was still alive. 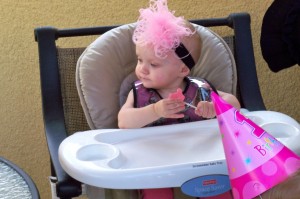 My daydream was quickly interrupted as a guest asked me for a few paper towels.  Evidently someone had spilled milk in the ball pit.  As our guests filed out of the party, I caught my breath and began the arduous task of cleaning up.  It was quiet as I sat there, wiping milk off of 700 individual plastic balls, killing the last of the Coronas.  I wondered if we may have started a precedent that couldn’t be beat.  What happens when she turns 2?  A pony?  The Blue Angels flying overhead?  Penn & Teller?