As we walked through our final set of electronic double-doors, we entered an isolated hallway outside of the operating room. 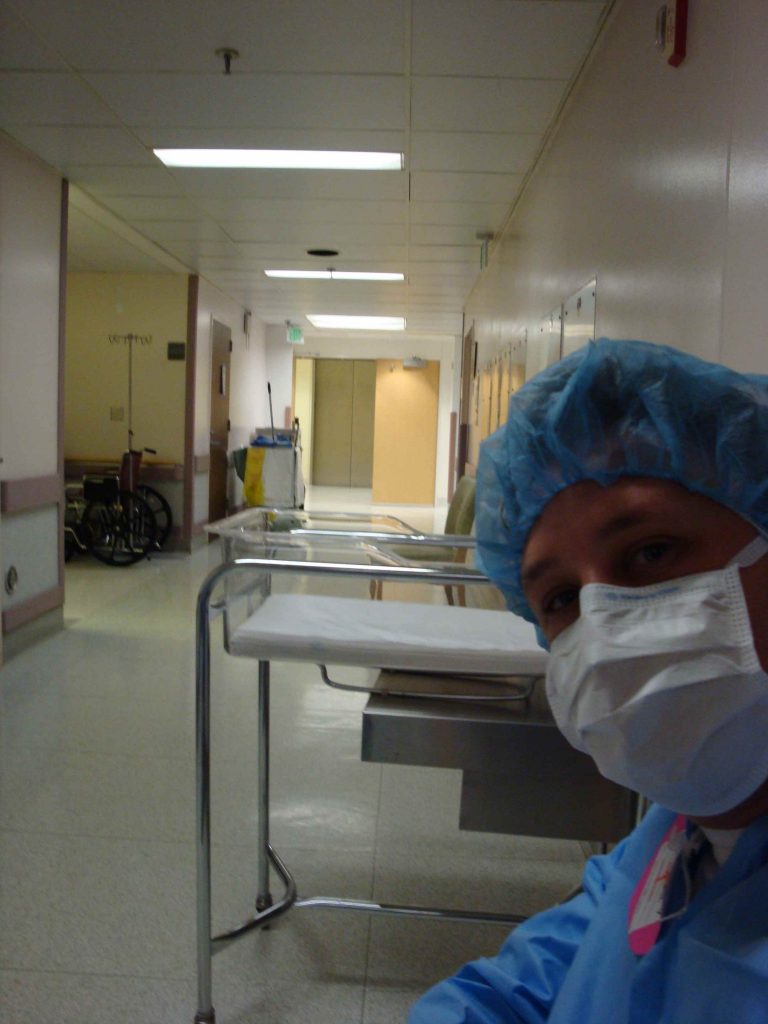 I quickly scanned the area, taking inventory of my surroundings in the event the impossible happens and I need to go Jack Bauer on someone’s ass during a hostile takeover.  Two chairs, a janitor cart with implements, a wheelchair and an empty plastic bassinet.  My escape method would’ve been to stab the imaginary terrorists with a broken broom handle, block the hallway with the wheelchair and escape down the laundry chute. What?

The nurse ushered Jen into the operating room and instructed me to park myself in a chair outside the door while they prepped her for surgery.  The time that I actually sat there waiting remains unclear, ten minutes and eternity were one and the same.  I started to zone out and tried to find something to take my mind off of the situation.

I remember looking at the wheelchair, thinking about how much fun it was for Cole Trickle and Rowdy Burns to race each other through the hospital in ‘Days of Thunder’. Thinking about how the hammer was about to drop on me, not to help me win Daytona, but to be a dad.

For a few minutes, I thought they may have forgotten about me waiting in the hallway.  At least once, I tried to eavesdrop on exactly what was happening behind closed doors.  A nurse poked her head out and gave me the thumbs up.  As I walked in, I remember thinking that this was a much looser scene than I had envisioned.  To calm my nerves, I started to think about it like someone who works at Jiffy Lube, who probably changes the oil on 100 cars a day.  This delivery team probably performs a dozen births a day and it becomes another day at the office to them, but still, it was a little informal.

The anestesiologist threw me an air fist pound as he plugged his ipod into a dock.  Did this cat put a mix together?  It doesn’t get more surreal than sitting down to hold your wife’s hand as she’s about to give birth, listening to a rock block of Radiohead while admiring the Air Jordan’s of the tech running the vitals machine. It was only a few minutes before I heard the Wizard of Oz (our doctor) calling my name from behind the curtain, telling me that it was alright to stand up and record the delivery if that’s what we wanted.  I readied the video camera and tried to stand up.  The first try indicated that I had ‘car accident legs’. You know, when you almost get into a car accident and your legs go from sturdy oak timber to balsa wood with a touch of pins and needles?  The second try found me on my feet, peering over the curtain while pressing record.  Once again, the 2×4 came out and hit me across the face, big time.  It must’ve looked like I was trying to catch houseflies, standing there with my mouth agape.  I was having flashbacks of watching ‘Alien’, when the chestburster emerged from that guys body.  Before I could blackout, the sound of a screaming baby filled the room and almost drowned out my favorite Coldplay song.

It was similar to watching a Nascar pit crew, as they took vitals and wiped this kid down.  The closest I’ll ever get to becoming a doctor is right here. I’ll be honest, I completely forgot about the umbilical cord.  When they asked me if I wanted to cut it, it felt like everyone in the whole room stopped what they were doing and were looking at me for an answer.  It was a different species of peer pressure, and it lit a fire under my adrenal glands.  I started calling the shots like a big time surgeon, demanding tools that weren’t even on the tray or even remotely involved in medicine.  They complied with a pair of scissors and I used a trained eye to get a precision cut.  I couldn’t handle a malpractice lawsuit from my daughter, she was only 6 minutes old.

They finished up with Jen around the same time Ava was dusted off and wrapped in a towel.  She got her wristband (first piece of jewelry, certainly not the last) and I brought her across to see Jen. In retrospect, this should’ve been done earlier and hopefully I’ll be reminded of it (sarcasm) for years to come.

This is the first time that I held my daughter and I was drunk on a cocktail of joy and panic. 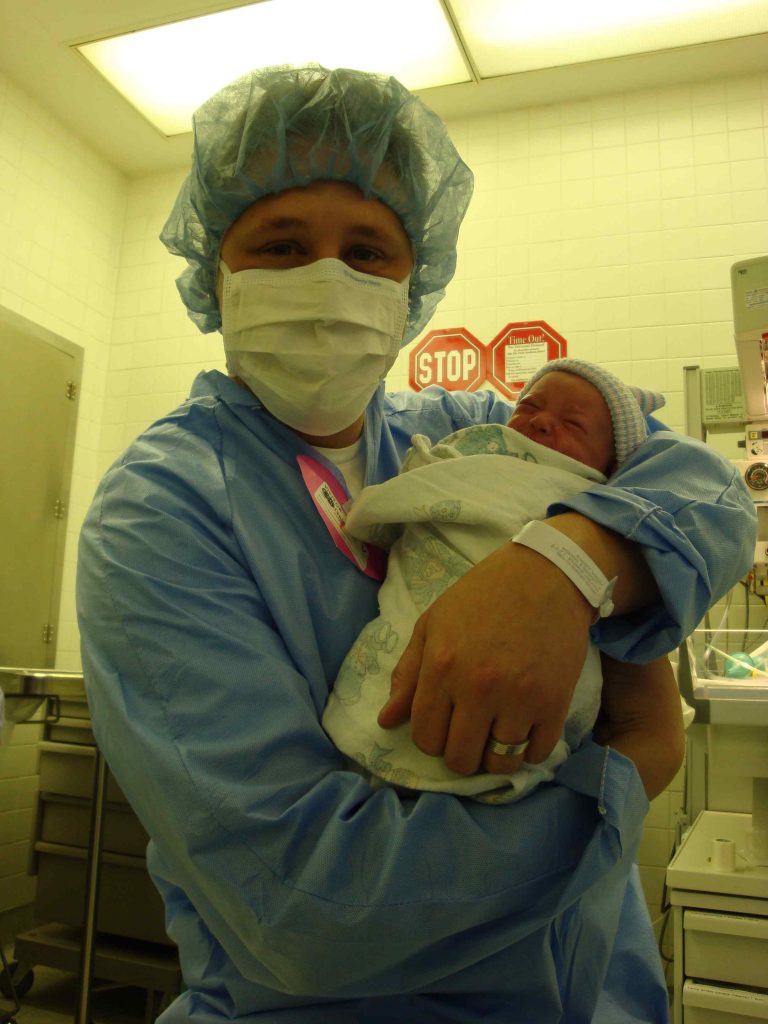 I look pretty collected here, but under the cafeteria afro-netting and face mask, I’m mildly nervous.  She was so tiny and I was Lennie Small from ‘Of Mice and Men’, trying not to crush her with my big, dumb farm hands.  She was beautiful.