Flying the red-eye with an infant isn’t as glamorous as banging a flight attendant in a 737 bathroom on the way to your buddy’s bachelor party in Vegas, but it does have its perks.  Wait, no, it doesn’t.  It doesn’t have any perks.

Welcome to being the disease.

If you want to know what it was like having leprosy in the Middle Ages, try walking onto an overnight flight with a baby.  No one wants to be near you.  Jen and I introduced ourselves to this awkward phenomenon at the height of the Christmas holiday, making it significantly more bothersome. 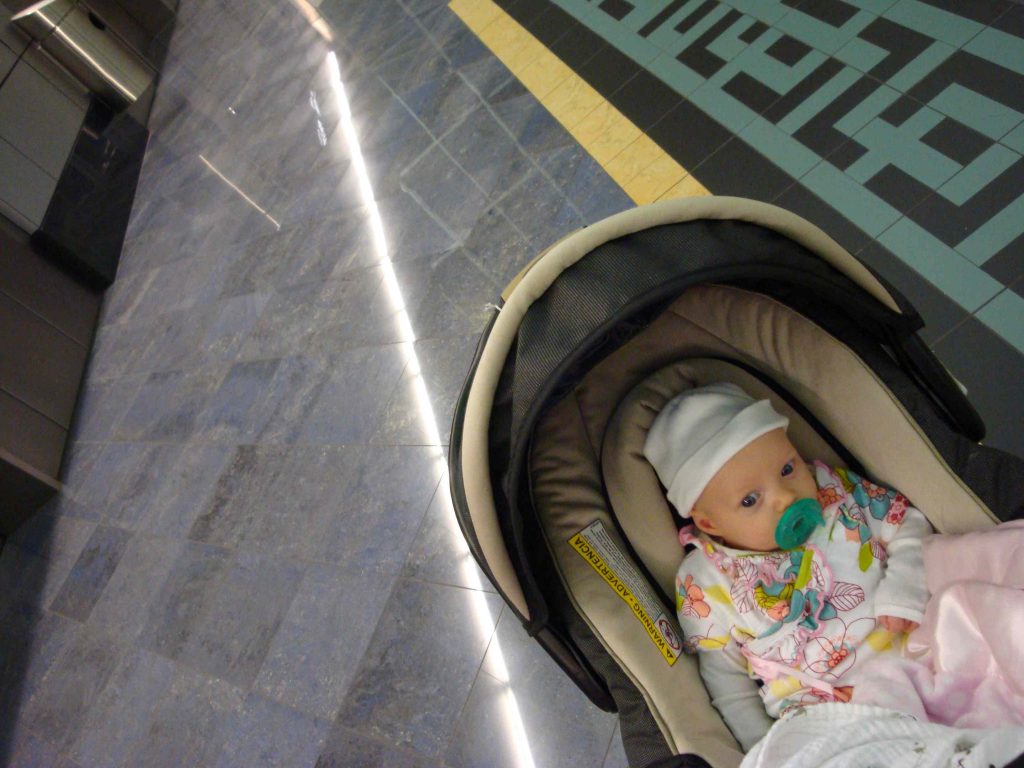 Ava’s first flight and the first leg of our trip was from LAX to ATL to visit Jen’s family.  For added aggravation, I pulled out all the stops to get us seated in the ass end of the plane. Normally they allow parents with strollers to board the plane first and this would’ve worked out if we were on time, which we weren’t.  Being late meant that we were forced to make that long, desert crawl through the first 4 zones of seats.

By the time we boarded, first-class already had cocktails and people were paying for headphones.  The pilot came on the PA system and was talking about final preparations for take-off.  Everyone in the first few zones pretended not to stare at me, as I boasted a kid on my chest and banged my diaperbag off of every seat, triggering a jingle from a buried toy. Did I forget to mention that I also had a Boston Terrier in a duffle bag over my shoulder.  Yeah, he goes under the seat.  I’m not an asshole, I knew what they we’re thinking:

EVERY PASSENGER: “Holy shit. This guy had better not sit next to me.”

With lovies* Springsteening out of my back pockets and a zebra-striped bottle warmer, I pushed us back into our seats.  We were so relieved to find out that half the assholes on our flight filled up our overhead bins, leaving us with nowhere to put our bags.  This left me walking up and down the aisle, reopening already closed bins and being reprimanded to take my seat by a flight steward in a Santa hat.

The part of the flight that seemed to bother Ava the most was taking off and landing and I’m sure it was due to the change in cabin pressure. In the event that she decided to ‘Hulk out’ and couldn’t be contained, I was prepared.  A friend once told me that the best way to squash any passenger uprisings or physical attacks on you and your screaming infant was to liquor everyone up in the immediate area.  Everyone loves free booze.  I was hoping, down deep, with fingers crossed, that free booze trumped screaming baby.

Luck shone upon us that early morning and Ava slept the entire flight in her sling.  I saved myself a potentially huge bar tab and because the people around us made it out unscathed, they felt the need to says things to us like:

ASSHOLE PASSENGER #1: “I didn’t even know there was a baby on board!”

ASSHOLE PASSENGER #2: “She’s such a sweetheart.  First one is always the best, eh?”.

ME: “You know, she really is a sweetheart!  Sometimes I forget I’m even traveling with someone who can’t take care of themself.”

Normally they can sense my sarcasm, but if it shoots over their head, the melodramatic roll of my eyes usually brings them up to speed.  I acted like it wasn’t an act of God or something Stacey Keach should talk about on Unsolved Mysteries.

If you’re looking for tangible impatience, you could cut it with a knife as soon as an airplane hit the ground.  Everyone needed to deplane immediately, even though we were still taxiing. What’s the rush? Unless you have a connection, you’re going to be standing with me, waiting for 45 minutes in front of the baggage carousel, telling someone on your cell phone that you just had the flight from hell.

The good news was that we survived our first flight with a newborn, the bad news (for my dad-gut) was that we had landed in cheese grit country.

*LOVIE:  swath of satin fabric that the baby can’t live without.