HEY! I wrote a few books - CHECK THEM OUT!
7shares

A majority of us attribute Ben Franklin with coining this popular phrase.

If in fact he did, my question is, was he schnookered out of his mind on a wagon-load of colonial ales or what?

I’m not trashing the guy.  I really like Ben, I think he’s a chill dude and we probably would’ve hung out and ripped Colonial America a new one.

I don’t completely disagree with this saying.  Generally, I believe that honesty IS the best policy.  It’s certainly how I was raised and I often follow that mantra in present day.

But have we reached a point where we’ve become hyper-honest?

Look, if I see you walk out of the grocery store bathroom with half a toilet sanitary strip hanging out of your pants… am I gonna pull you aside before you hit the aisles, someone sees you and you go viral on YouTube?  YES.

If I’m driving behind you for the last ten miles waiting for you to make a left turn, BECAUSE YOU’VE HAD YOUR BLINKER ON THAT LONG… am I gonna pull up alongside of you and ‘politely’ signal that you’re #1?  YES.

If you parked so close to me that you made me and my kids crawl through the trunk to get into the car… am I leaving you a note?  YES.

And if I can’t hang out at your housewarming party any longer because Game 3 of the World Series is on, I’m gonna give it to you straight up.  You deserve that honesty.

I think adults owe it to one another to tell the truth.

But what about with kids?

As part of the #TalkEarly parenting blogger team, I recently had the opportunity to hear Lisa Graham Keegan speak about values, children and honesty.  Not only is Lisa a member of The Century Council National Advisory Board, she’s also one of the founding members of the Education Leaders Council and was subsequently named CEO.  She’s long worked for education reform, speaks regularly in front of Congress, State Legislative bodies and educational organizations – and also has children of her own.

One of the things Keegan said that really stuck with me is that parents often go wrong with this ‘hyper-honesty’ concept and ultimately it’s not necessary – this doesn’t have to be a tell-all relationship and I agree with Lisa. 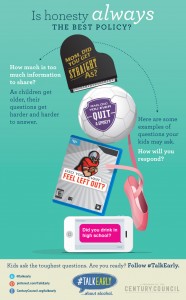 Am I going to be hyper-honest with my kids?  Doubtful.

My kids don’t need to know every single nitty-gritty detail about my life.  All in all, I was a good kid while growing up.  I got decent grades, played sports, was involved in student government and extracurricular activities, but I was no perfect angel.

The point is, I’d like to be a little less forthcoming when it comes to certain things (see above) and put an emphasis on the positive.

I want there to be an open dialogue between me and my kids.  I hope that we’ll be able to sit down for dinner every night and talk openly about our day.  I’m not going to shy away from conversations about sex, drugs, bullying and underage drinking.

I intend on offering my children a realistic idea of adolescence.  I can certainly find a way to let them know about the good and evils that lurk around the corners without ‘giving up the farm’.

I want to instill good morals and values within them and give them a foundation to be able to make their own (mistakes – bwahaha!) decisions.  It’s important that they have the opportunity to succeed AND fail on their own, to face challenges and make decisions without me constantly watching over them and have the coping skills to deal with both.

In the end, hypocritically, I do hope they’re completely honest with me.  I’m not delusional and I know at some point they’ll lie to me or my wife, I just hope they don’t lie to themselves.

What about you?  How honest will you be with your kids… and about what?