You never had to ask me twice as a kid to dress up as my favorite president, cartoon character or mass murderer and walk around the neighborhood, knocking on everyone’s door to collect my candy.

Heck, once we were done walking around our country block (several miles), we used to hitch a ride into our friends’ neighborhoods and take them down for every miniature candy bar they had left. I swear that my quads and calves hurt worse the day after trick-or-treating than the four years that I ran cross-country in high school.

The allure and nostalgia of getting outside and walking from house to house probably wore off somewhere around the end of elementary school or beginning of junior high, when Halloween became more about finding a costume that required the least amount of effort.

But now that I’ve grown up (not really) and started a family, the magic of the holidays has been reignited and I feel like it’s my duty as a dad and parent to teach them the ropes while also establishing traditions.

Thanksgiving and Christmas are easy, at the end of the day, you either sit there and shove food in your face several times during an afternoon OR you lie around for hours in your pajamas opening presents – either way, it’s a cake walk. Literally… sometimes we have cake on both occasions.

Between designing and constructing your costume (we’re old school) and hiking the lattice grid-work of a city block, it can be exhausting… certainly not how I remembered it, but that’s part of my job right now:

To get my kids trick-or-treating. Besides being an incredible October rite of passage, it also gets the whole family moving and active to make sure we’re balancing out the sweets during this festive time of year.

Yeah, yeah, I know you’re saying ‘Your kids are all under the age of 5, how hard can it be pushing them over to the neighbor’s house in a stroller?’

It’s a lot more than that.

Maybe in the beginning, with Ava, it wasn’t so hard.

But the following year, Charlie had already made his way into the world, so he needed an outfit…

… and Ava had begun to understand the REAL meaning of this holiday – you got to dress up AND eat candy…ummmm…. SHE WAS TOTALLY IN.

We didn’t do much more than walk them around our block with our neighbors and their kids, giving us enough time to trade some sugar and burn off some energy before they went to bed.

The following season, both Ava and Charlie became extremely well-versed in the art of walking and running (mostly away from us).

Ava had gained some seniority on the festivities, picked out her own costume and informed Charlie of ‘how this thing worked’. Simply put, she would say, “Mom and Dad will walk us around to everyone and we’ll eat all the candy we can get.”

So she convinced Charlie to be a monkey and Ava went with the owl.

We increased our candy coverage significantly during the next Halloween, which is good exercise for the kids, but bad on my belly after they fall asleep and I pick through to find my favorites while watching Seinfeld reruns at midnight.

But it hasn’t all been about just one night as they’ve grown older.

We’ve really had some fun, getting them out to festivals…

Taking them to the local orchards to find their pumpkins… 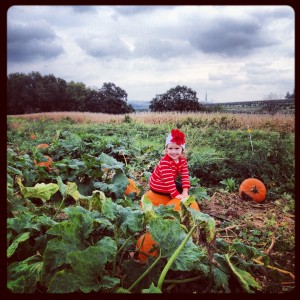 …even if they were too small to pick them up… … and teach them the art of carving. 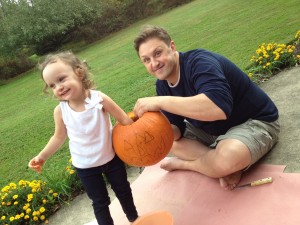 But I have to say, the best part has been doing it, together, as a family.

When I became a dad, I made a pledge to myself that I would play an active part of my kids’ lives, show them the ropes, teach them traditions and give them some of the fond (and not so fond) memories that I still hold important from my childhood today.

Coincidentally, getting my kids involved this season also honors our family’s commitment to the Let’s Play Pledge to devote more time to active play. Just because the weather is cooling off doesn’t mean that we can’t take advantage of the precious few bearable days and nights until the snow hits. In fact, Halloween is the perfect time to encourage your kids to get active & play while they explore their imaginations in those costumes.

Get your kids outside this fall, let them explore the pumpkin patch or apple orchard, prod them along the sidewalk in their costumes, hide in the bushes and shoot video of them nailing their first ‘trick or treat.’

Our kids grow up so fast, sometimes we forget to just enjoy these simple moments while they’re here.

Before you know it, the State Police will be knocking at your door, wondering why your neighbor’s house two doors down is covered in Cottonelle and eggs all over his Cadillac…

…or maybe that’s just me.