Heroes come in all shapes and sizes.

Earlier today, unbeknownst to you, it came in the form of this guy. 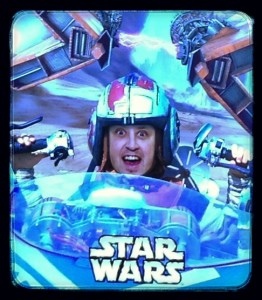 Unfortunately, here he is again… 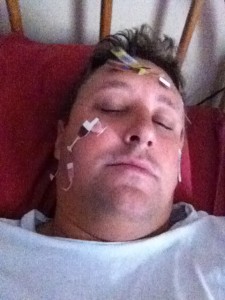 All 6’1″ and 230 pounds of mouth-breathing sexiness with stickers on his face.

He may not look like much, but after making the kids breakfast, packing their lunches and running backpacks to the car…this ‘guy’ realized that his wife and kids had accidentally locked everyone outside…with a newborn in the house, hanging from a door-jamb swing, all alone.

With no spare key, unlocked window or access to dynamite to light up the morning suburbia sky, this devoted parent stopped to focus.

I summoned my life experiences and hours of watching ‘Cops’ in syndication and quickly found the answer. A weighted exercise ‘Body Bar’ that my wife tells me not to throw away because ‘I’m going to use that!’, but never does.

I felt like King Arthur, pulling the heavy staff of metal from the depths of our garage, cluttered with folding lawn chairs and a thousand rolls of gift wrap that won’t go away.

I told my army (disheveled wife, late for work and two toddlers in rain gear, strangling yogurt tubes) to ‘BACK UP!’ as I prepared to become included in EVERY. SINGLE. PARENTING. HISTORY. BOOK. EVER.

It only took two blows (that’s what she said) to compromise the heavy steel door.

My wife ran inside and the kids cheered. Mason had no clue that I had just saved his life (or two hours of mental anguish, watching him through the window, sitting in a door-jamb swing, before a locksmith arrived)… 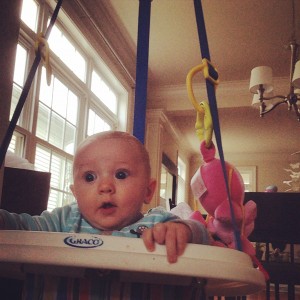 …but rest assured, it’s now on the internet. So he’ll find out…eventually.

ABOUT THE AUTHOR:  Adrian Kulp is a blogger, author, TV producer and full-time stay-at-home dad.  His first book for Penguin Publishing, a comedic parenting memoir, debuted in May of 2013.  He currently writes Dad or Alive, as well as for The Huffington Post.  He’s a member of Target’s Inner Circle and a contributor to Kids in the House.  He most recently produced ‘Modern Dads’ for A&E and moderated a panel on fatherhood at Dad Summit 2.0 in New Orleans in January of 2014. He enjoys long walks on the beach and using the bathroom for more than five minutes without an audience.