Once upon a time (this past summer), we took a weekender to Asheville, North Carolina.  We decided that the quickest route to get there was to go 150 miles out of our way to visit the Cabbage Patch Kid headquarters in Cleveland, GA.

We didn’t stop at the enormous Bass Pro Shops, the one with the lure testing tank, where die-hards like my dad enjoy casting different weapons from their arsenal and watching their ‘action’ underwater.  We also drove right by the receding waters of Lake Lanier, where this summer, they were uncovering old guns, beer cans, stolen cars and sunken Christmas trees tied to cinder blocks. Just before Cleveland, miles of dense forest thinned out to reveal one of those quaint little Bavarian holiday villages.  Like every other jackass on the road, we pulled off to window shop for hand-whiddled Christmas ornaments in the dead of July. 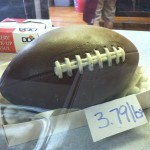 We stumbled upon the Hansel & Gretel candy shop which boasted this 4-pound diabetes football.  We gawked and shoved each other out of the way like obnoxious teenagers with our iphones, trying to be first to upload this monstrosity to Facebook.  They also had chocolate covered Fritos and my personal favorite, the great wall of jellybeans. 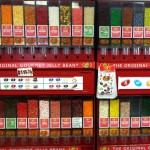 We suffered a toddler tier-3 meltdown, but negotiated an eleventh-hour deal which found us responsible for purchasing a 3lb bag of assorted beans in exchange for less dramatic screaming episodes in public. 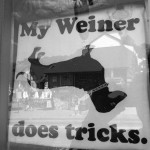 The novelty shop had a t-shirt that my wife wouldn’t let me buy (decent move on her end) and I discovered this little gem while I purchased a hand-squeezed lemonade. 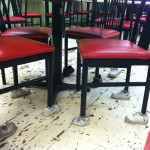 If your kid is missing some shoes, message me for their info.

If all this wasn’t enough for one day (let alone morning), we hunkered down for some calories.  A nice bowl of Spatzle, washed down with some warm apple strudel. A BIG carbo-load for the next destination…

These are the sacrifices we make. 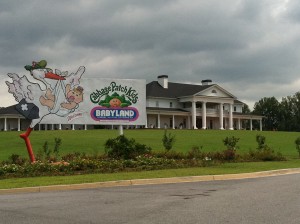 We parked and emerged from the cabin of the vehicle to be greeted by my favorite, bugs and humidity.  The porch of Babyland General was like an infinity pool, but instead of water disappearing into the Pacific horizon, it was like Charlotte airport, sticky rocking chairs for miles.

Inside the lobby they showcase the ‘O.G.’ CPK’s from 78′, all lit up behind bulletproof glass.  Some of these are worth 35k a pop.  Makes me glad that my dad gave away all of my original G.I. Joe’s, Star Wars and Transformers to some guy at work.  They probably weren’t worth anything anyway.  I’m sure his kid took great care of them.

With the amount of cabbage (pun intended) they had hanging out here, I kinda figured they would’ve pumped a few bucks into security.  I guess they assume that out in the country, on a peaceful wooded stretch, the chances of a militant assault squad smashing in to abduct a 76′ needle-molded, soft-sculptured ‘Dexter’, is fairly unlikely. 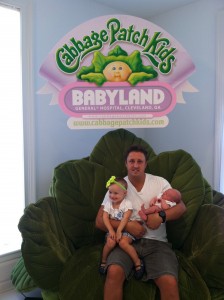 I sometimes have trouble expressing my emotions, but I seem pretty dead-on here.  There’s something so relaxing about posing for a picture on the lettuce chair in the lobby, while eager tourist patch-groupies line up behind your family, extending tripod legs and fighting with their sleeveless spouses about how to set the timer.

One quick observation I made was that no one in Northern Georgia brandishes sleeves on their shirts and if you don’t have a decent dip container fade on the back pocket of your Wranglers, you’d better wait outside in the truck. 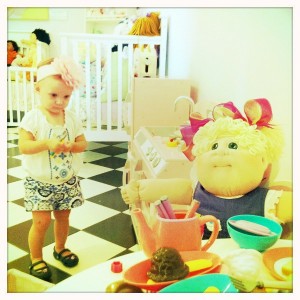 Ava grew bored with the nostalgia of the stinky-70’s dolls and made a run towards the back of Babyland.  She disappeared into one of the side rooms and within seconds, I found myself invited to sit in a miniature kids chair, drinking invisible tea (booze) and eating plastic scones.

At first I felt a little uncomfortable, maybe it was that my knees were jacked up into my face or that the insanely humid air had melted my balls into my thighs.  Maybe I felt a little silly being the only guy at the tea party with sleeves on my shirt.  All of that faded when I caught a glimpse of how much Ava was enjoying this moment.  She was so excited that Dada was down on her level, smiling, laughing and pretending.  Pretty cool.

Over the intercom, the receptionist announced that a live birth would be happening in a few minutes and that everyone should make their way to the Cabbage Patch.  ‘Is this for real?’, I asked my wife.  ‘Is some chick giving birth?’  This is one of those occasions where she just looks at me, shakes her head and moves on.

Thankfully, they were referring to the dolls.  Things hatch quicker than on that dang movie ‘Aliens’! 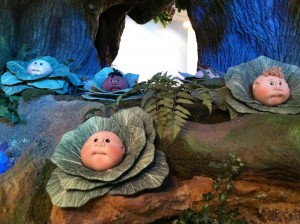 We gathered around as the 18-year old doctor put on his best actor’s workshop, performing a seamless (not really) ‘easyouttame’ (episiotomy) with a straight face, all while making eight bucks an hour, no benefits.  The doc took a few moments before washing up for his next cabbage-section and posed with a proud father (me) who just got fifty dollars lighter. 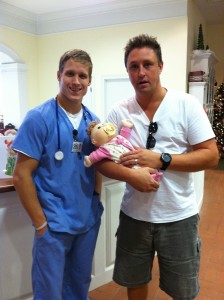 I burned off my strudel chasing Ava to shoot this video.  It’s a perfect example of the inner-chaos behind a toddlers decision-making process when supplied with too many variables.

And if you thought we could just pay for a doll and head for the air-conditioned car, you should guess again.  You need to fill out the proper adoption papers ya’ll!

At this point, we had been in here for two hours, so I turned the show over to my wife and resident notary.  I focused my efforts on acting impatient and crop-dusting strudel farts onto unsuspecting kids while faking interest in a CPK sweatshirt or snow globe. 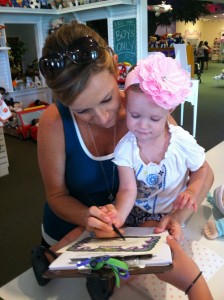 With the ink dried on our adoption papers (and my Visa receipt), we added another savage to our patch.