The Bell Boeing V-22 Osprey is an American multi-mission, military, tiltrotor aircraft with both a vertical takeoff and landing, and short takeoff and landing capability. It is designed to combine the functionality of a conventional helicopter with the long-range, high-speed cruise performance of a turboprop aircraft. In this photo, it drops a hummer onto the battlefield, to help our soldiers on the front line. 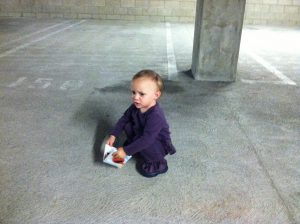 The Kulp-Kroucher Defecation Bomb is an American civilian daughter, tiltrotor toddler with both vertical takeoff and landing, and short takeoff and landing capacity.  She was designed to combine the functionality of a construction worker needing to take a spontaneous dump on the job site with the short-range, low-speed bomb-dropping performance of a diaper-wearing 2-year old.

In this photo, instead of taking out an enemy bunker or dropping aid to the villagers, she lays a bomb down on the inside of a #4 Huggies while reading ‘Elmo takes a bath’ in the middle of my parking structure.

My daughter, the Osprey.